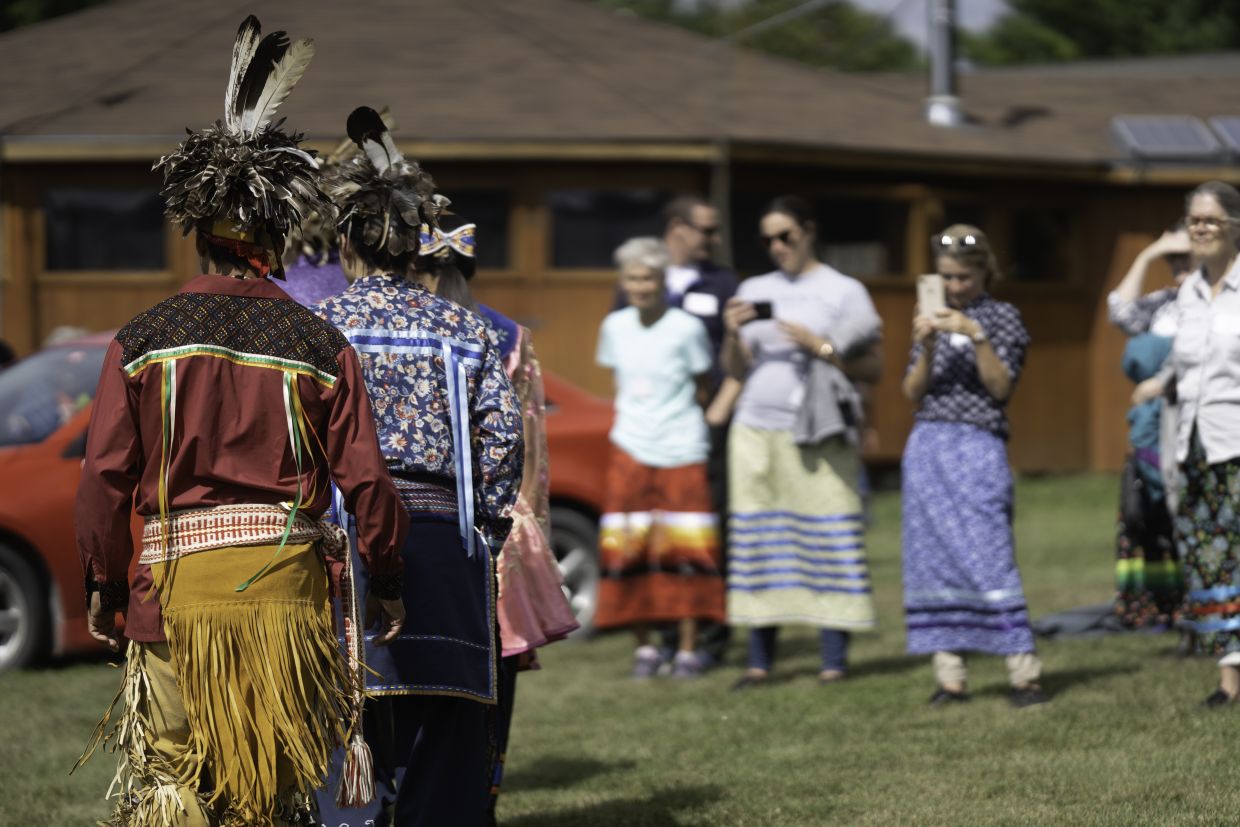 Alumni travel a Mile in Their Shoes

On Sept. 13, as rain clouds formed in the morning sky, a unique initiative brought Queen’s University alumni together on the shores of the Grand River near Brantford, Ont. The alumni, from all parts of the province and all walks of life, had gathered for one purpose: Truth and Reconciliation.

It was a day that was months in the making and part of a bigger initiative with an even bigger goal: to bring Queen’s alumni together on an experiential journey of learning and dialogue, guided by Indigenous partners.

The initiative, A Mile in Their Shoes: Truth, Empathy, and Reconciliation was organized by the Office of Advancement. It was initially prompted by alumni who expressed a desire to take an active part in the calls to action set forth by the Truth and Reconciliation Commission’s 2015 report, which stated that “all Canadians must make a firm and lasting commitment to Reconciliation to ensure that Canada is a country where our children and grandchildren can thrive.”

“This initiative would not have happened without the input of our alumni,” says Karen Bertrand (Artsci’94), Vice-Principal (Advancement). “It was their collaboration and commitment, along with the guidance of our Indigenous partners, that brought everyone together.”

A Mile in Their Shoes offered almost 40 alumni the chance to participate in three paths to move toward Reconciliation: a series of email readings that focused on biographical sketches of individuals who had been through the Residential school system; the Sept. 13 event, which took place at Soul of the Mother, a healing lodge at Six Nations of the Grand River and a self-directed, post-event course that will culminate in a virtual sharing circle in December.

The course content was curated by Ry Moran, Associate University Librarian – Reconciliation, at the University of Victoria, in collaboration with Kanonhsyonne (Janice Hill), Associate Vice-Principal (Indigenous Initiatives and Reconciliation) at Queen’s. The two guided the tone and content of all aspects of A Mile in Their Shoes, ensuring that all learning materials were both accurate and culturally sensitive.

“Remembering and honouring Survivors and all those that did not come home is critical” says Moran. “Truth and Reconciliation efforts remain incredibly important, and education is a key pathway on this journey.”

Hill agrees, adding that the event at Six Nations gives her hope for the future.

“Truth, understanding, and relationship building are necessary precursors to the hard work of Reconciliation,” Hill says. “My hope is that this event will bring us all one step closer to this work together.”

The event itself was coordinated by TAP Resources, an Indigenous-owned event management and consulting group based in Ohsweken, Ont.

“We wanted to work with Queen’s to create an event that would not only engage alumni, but that would also have a real impact in terms of how they see and understand Reconciliation,” says Tuesday MacDonald-Johnson, Founder and President of TAP Resources. “So much of what we did was experiential, and this was done quite deliberately. It was important to us that participants be moved – to think, and to take action. What I saw at this event made me feel quite sure that that’s exactly what happened.”

As a firekeeper tended to ceremonial flames, participants gathered at the lodge where they were greeted with a bowl of cold mush, identified by numbers rather than names, and addressed in the Mohawk language, a disorienting moment for many that was meant to make those attending feel a little bit of what Indigenous children would have felt when they arrived at Residential schools: confused, uncomfortable, and apprehensive.

This experience was followed by an Edge-of-the-Woods ceremony conducted by a traditional Faithkeeper of the Longhouse community, a ritual of Haudenosaunee origins, dialogue facilitated by Hill and Moran, a working lunch of Indigenous foods, a virtual tour of the oldest Residential school in Canada, the Mohawk Institute (known by Survivors as the “Mush Hole” due to its its staple food – mush), where Indigenous children suffered horrific abuse, an emotional talk from survivor Blanche Hill, and a sharing circle for participants to reflect on what they had felt and observed. Many were visibly moved by the experience, and counsellors were on hand to provide support for anyone who felt overwhelmed at any time.

The day was punctuated by opportunities to see and hear Indigenous culture, from traditional teachings to traditional dancing, singing and drumming.

“As we are getting closer to the 2022 National Day for Truth and Reconciliation, let us honour the children who never returned home, the residential school Survivors, and their families and communities,” Gov. Gen Simon wrote in a letter to the gathered alumni. “Let us reaffirm our commitment to work together to build a more inclusive society and world, no matter what challenges we face.”

A Mile in Their Shoes will continue with opportunities for participants to study primary documents, art, and multimedia in advance of a virtual sharing circle in December that will reunite participants for further discussion and a chance to plan their own contributions to Reconciliation.

A pilot project for 2022, the Office of Advancement hopes to make A Mile in Their Shoes an annual opportunity and expand the guest list, which was kept smaller this year as programming was developed.

“We wanted to create a program with impact that we could build on and offer to more alumni each year,” says Leigh Kalin (Artsci'92), Associate Vice-Principal, Alumni Relations & Annual Giving. “Reconciliation is not something we can deal with in one course or one event. It’s an ongoing commitment for Queen’s, the Office of Advancement, and our alumni – but A Mile in Their Shoes is a step in the right direction.”

“Truth, understanding, and relationship building are necessary precursors to the hard work of Reconciliation."