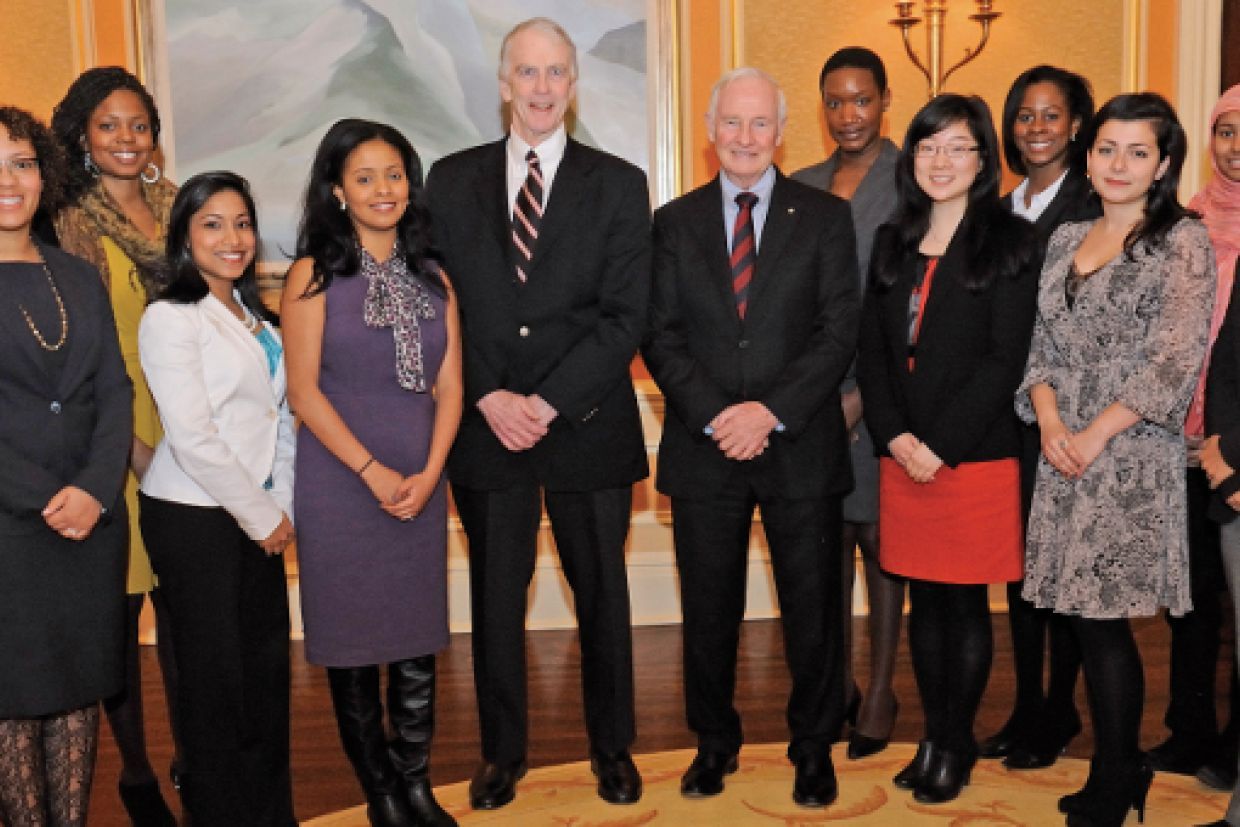 Bruce Alexander remembered for inspiring the next generation of leaders

Bruce Alexander, Com’60, LLD’11, wanted to change the lives of young people so they could go on to change their communities and the world.

That was his motivation for starting a mentorship group he called “The Shadow Cabinet,” which included students and professionals – namely women – who had diverse ethnic, religious, and academic backgrounds. His intention was to create opportunities for the group to work together and share ideas – opportunities they might not have had otherwise.

Alexander, an accomplished lawyer and public servant, used his connections to introduce the Shadow Cabinet to distinguished and influential individuals who could also serve as mentors. This included former Prime Minister Joe Clark, with whom Alexander worked as a special adviser during negotiations of the Charlottetown Accord, and other high-profile cabinet ministers and law makers.

As a mentor, Alexander brought a lifetime of experience in law, business, the public sector, and in volunteer roles. Born in Montreal, he went on to earn his Bachelor of Commerce at Queen’s and then a law degree from the University of Toronto. He rose to managing director of then Fraser Beatty (now Dentons) and, in the public sector, he served as an assistant deputy minister in the Ontario government in both the Ministry of Transportation and Communications and the Ministry of Community and Social Services. He was vice-chair of the Ontario Workplace Safety and Insurance Appeals Tribunal and a founding director of the John Howard Society of Toronto.

For much of his life, he was deeply involved in mentoring young people, with a focus on supporting those he identified as leaders.

“I wanted to work with kids who had leadership potential, not only in their own communities, but in the broader Canadian context,” he told the Queen’s Alumni Review in 2012. “I wanted to give them the connections and confidence I had when I was their age to allow them to achieve their potential.”

Alexander was also a dedicated supporter of Queen's, serving as Alma Mater Society president in 1960 and on the Board of Trustees for more than a decade. He championed multiple initiatives to promote advancement, diversity, outreach, and Queen's Football, and was a longtime reunion coordinator for his class. For his contributions to Queen’s, he received the John Orr Award in 2001 and an honorary degree in 2011. In 2016, he was recognized by the Queen’s University Alumni Association with the Alumni Mentorship Award.

“Bruce used his connections for good, and through that helped build an incredible community of women with the Shadow Cabinet – all racialized women in varying fields, with whom I have since built a solid friendship and continue to be inspired,” Chowdhury says.

Chowdhury met Alexander while she was president of the AMS – a post Alexander held some 50 years earlier.

“Since that time, he has been a relentless advocate for me and my passions, introducing me into his world of endless possibility,” says Chowdhury. “His energy was infectious, and his curiosity inspiring.”

Chowdhury says Alexander had the ability to connect with and care for everyone – no matter how different from himself – which she attributes to a sincere belief that a better world is possible.

“It's difficult for me to account how meaningful it is to have had a champion like Bruce on your side,” she says. “He adopted your dreams, goals, and wins as his own. He made you feel welcome and celebrated in spaces you didn't typically see yourself in. I am forever inspired by Bruce. He had a larger-than-life presence, and his energy is one that I will miss deeply.”

Alexander was also a dedicated member of Kingston’s rowing community. In 1975, he initiated a report on the feasibility of a rowing program at Queen’s. The report recommended the establishment of an independent Queen’s rowing club. Through his advocacy and leadership, Bruce became a co-founder of both the Queen’s Rowing Club and the Kingston Rowing Club and laid the foundation for rowing in Kingston.

Prior to receiving a QUAA mentorship award in 2016, Bruce recalled the importance he placed on mentorship in providing opportunities in his own life, crediting former registrar Jean Royce, 14th Principal John Deutsch, Political Studies Professor Emeritus John Meisel, and former university chaplain Padre Laverty – who “all had a hand in shaping (his) destiny.”

He made you feel welcome and celebrated in spaces you didn't typically see yourself in. I am forever inspired by Bruce.