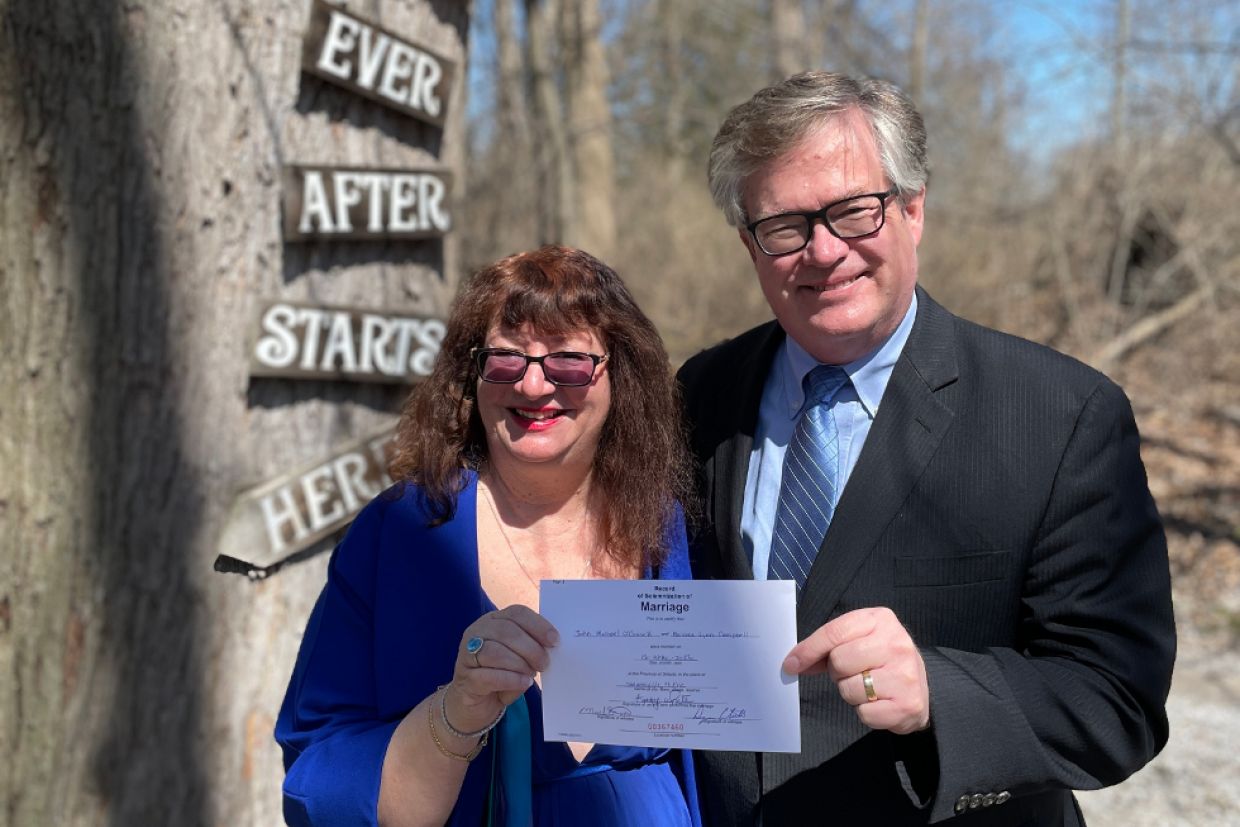 Today, Melodie Campbell (nee Offer), Com’78, has an infectious personality punctuated by smiles and laughs when she talks. But that wasn’t the case three and a half years ago.

Her husband, David Campbell, Sc’76 (whom she met at Queen’s), died from cancer. Instead of enjoying retirement together as planned, she was alone and grieving.

“I was like a shipwreck,” Campbell says. “We weren’t even 65. When you go through that kind of grief you weren’t expecting, it was like I was drowning.”

Her former Commerce classmate, Mike O’Connell, Com’78, was in a similar state of loneliness. He was recently divorced and trying to find a new way forward.

O’Connell heard about Campbell losing her husband and reached out to his former classmate last year. Soon, the messages were more frequent, then the phone calls started, and their conversations became longer and longer.

In normal times, the next stage would be to go on a few dates. In the era of COVID and lockdowns, however, their first date was essentially to move in together. They both have poor lung health and are cautious about going out in public. So they decided to ride out the pandemic together in isolation at Campbell’s home in Burlington, Ont.

They got to know each other very well – and fast. The two have a lot in common, with an especially strong bond over books. O’Connell owned Canadian Printco (a company focused on printing books) for 35 years. Campbell had several jobs including bank manager and hospital director. She started writing books on the side and today she is an award-winning crime writer with 17 books to her name.

They were engaged in November 2021 and eloped on April 12, 2022, at a drive-thru wedding chapel in Niagara Falls. The post-wedding dinner was drive-thru Tim Hortons.

Fear of COVID-19 and large gatherings were among the reasons for the elopement, but an added bonus was cost. The Commerce grads are proud they only spent $400 when other couples spend tens of thousands of dollars on their weddings.

A few of their Commerce classmates know they are now married, while others will be surprised at next year’s Homecoming when they return for their 45th reunion.

Campbell now looks back on the dark period in her life and wants others who are going through similar tough times to know things get better.

“I liken it to your life being a book,” Campbell says. “Sometimes you have marvelous chapters that can end suddenly and tragically. But the book of your life is not over. A new chapter will happen, and it might be a wonderful chapter. I am so grateful for the last nearly two years. It’s wonderful to have the spark of life again. I love Michael to bits. Love can happen twice.”