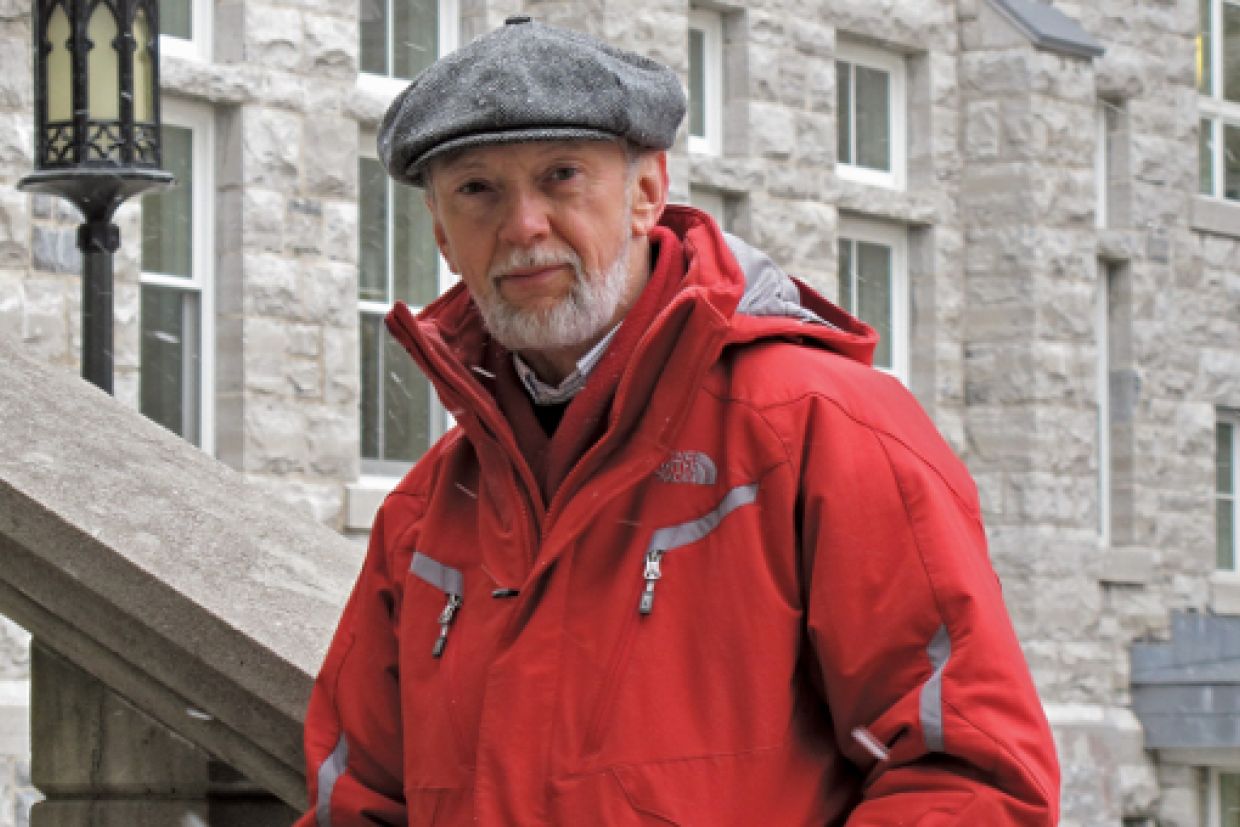 Former Alumni Review Magazine editor Ken Cuthbertson Arts’74, Law’83, is one of six members of the Queen’s community who will be honoured on Nov. 5 with the Distinguished Service Award.

The award has been handed out by University Council since 1974 to recognize individuals who have made Queen’s a better place.

For 28 years Mr. Cuthbertson served as the editor of the Alumni Review – a cornerstone for outreach to alumni since 1927 – before stepping down in 2014.

In addition to his efforts at the Review, Mr. Cuthbertson is also the editor of two books and the author of four others (with a fifth coming in 2017). His editing credits include Queen’s Goes to War, a 1995 collection of wartime reminiscences by alumni that was published to commemorate the 50th anniversary of the end of WWII, and a reissue of Congo Solo, a classic 1932 African travel book by New Yorker writer Emily Hahn.

Mr. Cuthbertson’s own writing includes three literary biographies and a historical novel. Inside, his 1992 biography of American journalist John Gunther was shortlisted for a Governor General's Literary Award in the non-fiction category. Nobody Said Not to Go, his 1998 biography of New Yorker writer Emily Hahn, and A Complex Fate, his 2014 biography of the American journalist-broadcaster William L. Shirer, received favourable reviews in the New York Times and other major publications. Ken is now busy putting the finishing touches on a book titled Hell Hath No Limits: The Great Halifax Explosion of 1917, to be published by HarperCollins in the fall of 2017. He’s also a regular editorial contributor to Queen’s Law Reports, the magazine of Queen’s Faculty of Law.

Mr. Cuthbertson’s hard work and dedication to Queen’s Advancement over the years earned him the John J. Heney Award in 2001, and he was made an honorary member of the Class of Sc'48 1/2.

He recently took time out to answer a few questions about receiving this year’s Distinguished Service Award and to reflect on his time at Queen’s.

Question: How does it feel to receive the Distinguished Service Award?

Answer: Knowing a bit about the history of the DSA award and the fact that it’s bestowed by University Council I'm delighted. I’m also honoured and humbled to be included among such a distinguished and worthy group of 2016 recipients. Adding to my delight is the realization that I join my predecessors at the Review – longtime editors (and friends/mentors) Herb Hamilton and Cathy Perkins – in what is a very elite club. (Quick . . . someone pinch me. I can’t believe I’m included in such a select company!)

Question: Why did you like best about working for the Review?

Answer: I was forever fascinated by the accomplishments of the members of the Queen’s family – past and present. For 28 years I was fortunate enough to work among, get to know, and to become friends with some of the brightest, most talented, accomplished, and engaging people I could ever have hoped to meet. Working at the Review was never “work.” I was paid to do a job I loved.

Question: What accomplishment have you achieved that you are most proud of at Queen’s?

Answer: I’m most proud of the evolution of the Review, which has evolved to become a vibrant, interesting, beautifully designed, and thoroughly professional publication. The Review enables members of the incredibly diverse and far-flung Queen’s family to keep in touch with each other and with their university. At the same time, the magazine offers the world a window on the great things that are happening here at Queen’s and in our alumni community. Like my predecessors, Herb and Cathy, I always felt the Review was special and that it played a vital role in keeping alumni in touch with their alma mater and vice versa. And I took great pride in the notion that unlike the magazines published by so many other Canadian universities, the Review recognized that Queen’s people don’t "leave their brains behind" when they graduate. With the support and encouragement of the administration and the QUAA, the Review was more than just a marketing tool. It was a publication that was willing to take chances, to celebrate the opinions, activities, and accomplishments of the Queen’s community in all its diversity. The magazine reflected the maturity and self-confidence of one of Canada's greatest academic institutions, one that didn't shy away from airing and dealing with important issues. I'm thinking of the debates about allowing prison inmates to take Queen’s correspondence courses, recognizing gay rights on campus, the “No Mean No” controversy, and street parties . . . to name just a few.  I like to think  – and anecdotal evidence certainly supports me in this view – that the Review has been an integral part of what it means to belong to the Queen’s family; since 1927, it has helped readers to carry a bit of Tricolour spirit, fraternity, and intellectual vitality with them wherever they go in the world. I hope it will always continue to do so.

Question:  What do you think makes Queen’s a special place?

Answer: That’s easy. In a word it’s “people.” It is people who are at the core of any great institution, and nowhere is that more true than at Queen’s.