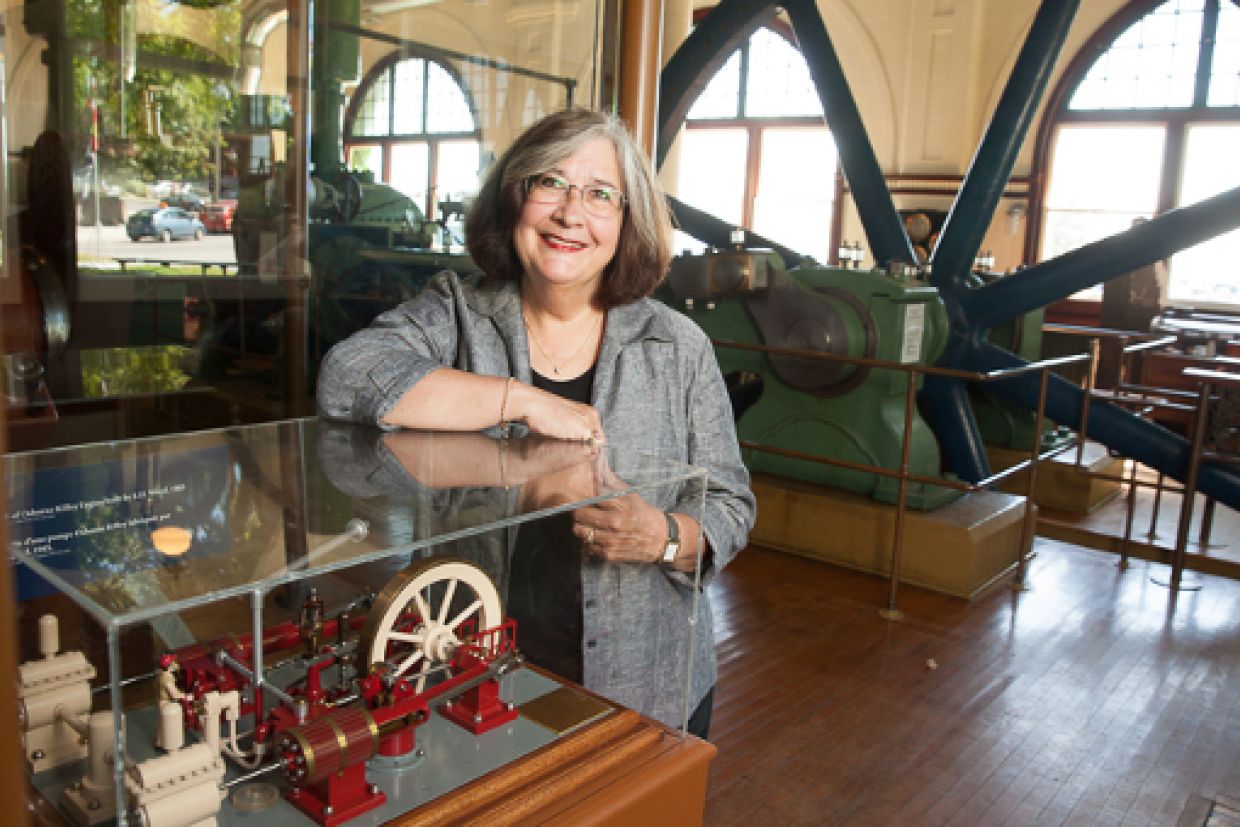 Faculty of Education professor Lynda Colgan is one of six members of the Queen’s community who will be honoured on Nov. 5 with the Distinguished Service Award.

The award has been handed out by University Council since 1974 to recognize individuals who have made Queen’s a better place.

Dr. Colgan has done a lot of community outreach on behalf of Queen’s. She is the founder and coordinator of Science Rendezvous Kingston. The annual science, technology, engineering and math (STEM) showcase has grown from 500 to 4220 visitors in six years and for four years has filled the Rogers K-Rock Centre. She has been the public face of making math accessible to everyone. For seven years Dr. Colgan wrote a weekly column in the Kingston Whig-Standard about math which lead to the development of two TVO Kids programs ─ The Prime Radicals and mathXplosion ─ and an award-winning children’s book, Mathemagic: Number Tricks. She was also a member of the University Senate where she was chair of the Operation Review Committee and Governance & Nominating Committee.

Dr. Colgan took time out to answer a few questions about receiving this year’s Distinguished Service Award and reflect on her time at Queen’s.

Question: How does it feel to receive the Distinguished Service Award?

Answer: I am humbled and honoured to receive this award because it is the result of a nomination by my peers. I am also keenly aware that the award is shared with the some 400 volunteers from Queen’s, the Royal Military College of Canada, St. Lawrence College and the community who have given me their unwavering and generous support to make Science Rendezvous Kingston possible. Knowing that my colleagues value my efforts to celebrate STEM by putting a human face to STEM research and researchers is an unsurpassed reward and award in its own right. The same is true for my work as Chair for Senate Governance Committees. It was a joy to serve in this capacity because of the multiple generosities of the committee members and the Secretariat staff. Leading change with respect to significant Senate policies and procedures was a privilege. The knowledge that my efforts, in collaboration with members of and advisors to the committees over many years, were appreciated outside of the committee meeting room is hugely gratifying.

Question: Why do you like best about volunteering/working for Queen’s?

Answer: The opportunities to learn, grow and forge new relationships. Since coming to Queen’s, my work has become “super-sized.” As a math educator, I have been given the chance to work in classrooms of unimaginable scales; dispelling the myth that math is “the bad guy” with thousands and thousands of teachers, children and parents. Why? When I first came to Queen’s, a colleague, William Higginson, introduced me to Kingston Whig-Standard editor, Steve Lukits, who gave me a chance to be a newspaper columnist. Little did I know that a loyal reader was assembling a scrapbook of all my columns which he sent to Pat Ellingson, then Head of Children’s Programming at TVO, asking her to consider the material for an education television program. That reader changed my life, and my classroom burst open, occupying the family rooms of TVO viewers across the province who tuned into The Prime Radicals and more recently, mathXplosion. The TVO experience led to a contract with Kids Can Press to write a children’s book that went on to win a prestigious award from The Mathematical Sciences Research Institute in the U.S. and an opportunity to perform mathemagic tricks for two thousand children at The Library of Congress in Washington, D.C. Imagine!

The outcomes of my role as coordinator of Science Rendezvous Kingston, similarly have been “large-scale.” I have collaborated with 400 researchers and students in other faculties and all departments with a STEM focus at Queen’s, RMCC, and SLC. I have developed positive professional relationships with citizen scientists from across Ontario. I have experienced exciting opportunities to work with APPSCI 100 students to make Rube Goldberg machines and square-wheeled tricycles and mentored graduate and undergraduate students as Faculty Advisor for Let’s Talk Science. This ever-expanding network with individuals of all ages from diverse backgrounds has enriched my life and cemented my commitment to informal STEM learning. At Science Rendezvous Kingston 2016, I had the privilege to personally welcome over 1,800 people to the Rogers K-ROCK Centre in the first 40 minutes after the doors opened: standing as “front-door greeter” and thanking them for coming to Canada’s largest STEM party. Knowing that people recognize me as the “host” of Science Rendezvous Kingston because of Gazette publications, local papers, radio and television is attributable to the value that the university and the community have for this important event and the extent to which it is promoted by participants and communications officers.

It never occurred to me, based on my experience as a mathematics educator, that I would ever be in a position to learn about the laws of the Senate of Canada or the extensive and historic documents related to the governance of a complex institution like Queen’s. My role on Senate Governance Committees not only gave me the chance to learn about an entirely new domain, but required me to make presentations and answer questions/debate issues at Senate, Faculty Boards, University Council and student government bodies. New experiences are concomitantly exciting and nerve-wracking, but knowing that I had the support of a knowledgeable and generous network: committee members, Secretariat staff, senators and administrators was empowering. I relished the challenges and welcomed every opportunity to expand my horizons through new learning and new associations. My experience with Senate Governance led to my appointment as Principal Woolf’s Academic Colleague at COU for one year: another unique opportunity to meet colleagues from across Ontario, learn about important initiatives at other post-secondary institutions and represent Queen’s in discussions about issues that ranged from mental health and on-line courses to Aboriginal education and sexual violence prevention and response programs.

Question: What accomplishment have you achieved that you are most proud of at Queen’s?

Answer: While all of my work with the communities in and around Kingston are important to me and are an extension of my commitment to informal learning and parent engagement, nothing compares to the unexpected and extraordinary success of Science Rendezvous Kingston. The inaugural event in 2011 at the Faculty of Education attracted only 500 people, but the enthusiasm of the visitors and presenters was palpable, and as the event drew to a close, “see you next year” was a common refrain. In the five years since, Science Rendezvous Kingston has grown to be the largest public STEM education event in Canada. The focus is to celebrate science, technology, engineering and mathematics as subjects and to promote STEM research, researchers and careers. A principal goal is to improve children’s relationships with STEM content and pique students’ attention in the possibilities and contributions of STEM subjects and professionals. Through a series of experiential hands-on booths, visitors to Science Rendezvous Kingston can play, engage, explore, or interact with STEM phenomena. What makes Science Rendezvous Kingston unique is the fact that we have so many return visitors every year. I have seen many of the same families year after year, and each time, they comment on the new features and time-tested “favourite” stations (like Dr. Philip Jessop’s Chemistry Magic Show). I am honoured that all of the presenters who participated in the first and subsequent years, continue to volunteer to host displays ─ it is a testament to the quality of the event and the degree to which it is valued. There are no words to express the extent of my appreciation for their support on my behalf.

Because of Science Rendezvous Kingston, participation in local robotics programs has grown in the Kingston area (now as many as six teams participate in the annual First Lego League event that I host at Duncan MacArthur Hall, and a formal partnership has developed between WAFFLES (Wild About Friends and Family Learning Engineering And Science) and the Pump House Steam Museum. The materials from The Math Midway (giant tangrams and Tower of Hanoi puzzles) will be part of The Learning Lab at The Pump House Steam Museum in Fall 2016.

Former high school volunteers have returned as presenters (e.g., The Bat Cave) and departments and organizations have already begun to inquire about the possibility of being on the program for 2017. Most notably, Science Rendezvous Kingston was selected to be part of an NSERC Science Odyssey showcase at Constitution Square in Ottawa in May 2016 because of its success and originality.

Question:  What do you think makes Queen’s a special place?

Answer: As all of my responses have indicated, Queen’s is special because of its people and possibilities. Shortly after arriving at Queen’s, I had the privilege to meet Astronaut Julie Payette when she received an Honorary Degree here. She signed my program, Aspere ad astra. While I may not have orbited the globe in a spacecraft, I have come closer to the stars than I ever dreamed possible since coming to Queen’s because I have been valued, appreciated, respected, encouraged, and trusted by those in positions of responsibility. Those feelings are personally and professionally motivational and inspirational and have contributed to my determination to do and be my best, ever-striving to climb yet another rung closer to that star. I have been stretched professionally, taking on new and challenging responsibilities and unfamiliar leadership roles, yet on that unfamiliar terrain and on ventures across some rough territory, I have been supported consistently by expert individuals from peers and external professionals to staff and students, and provided with access to a rich suite of resources that inform, guide and open doors.