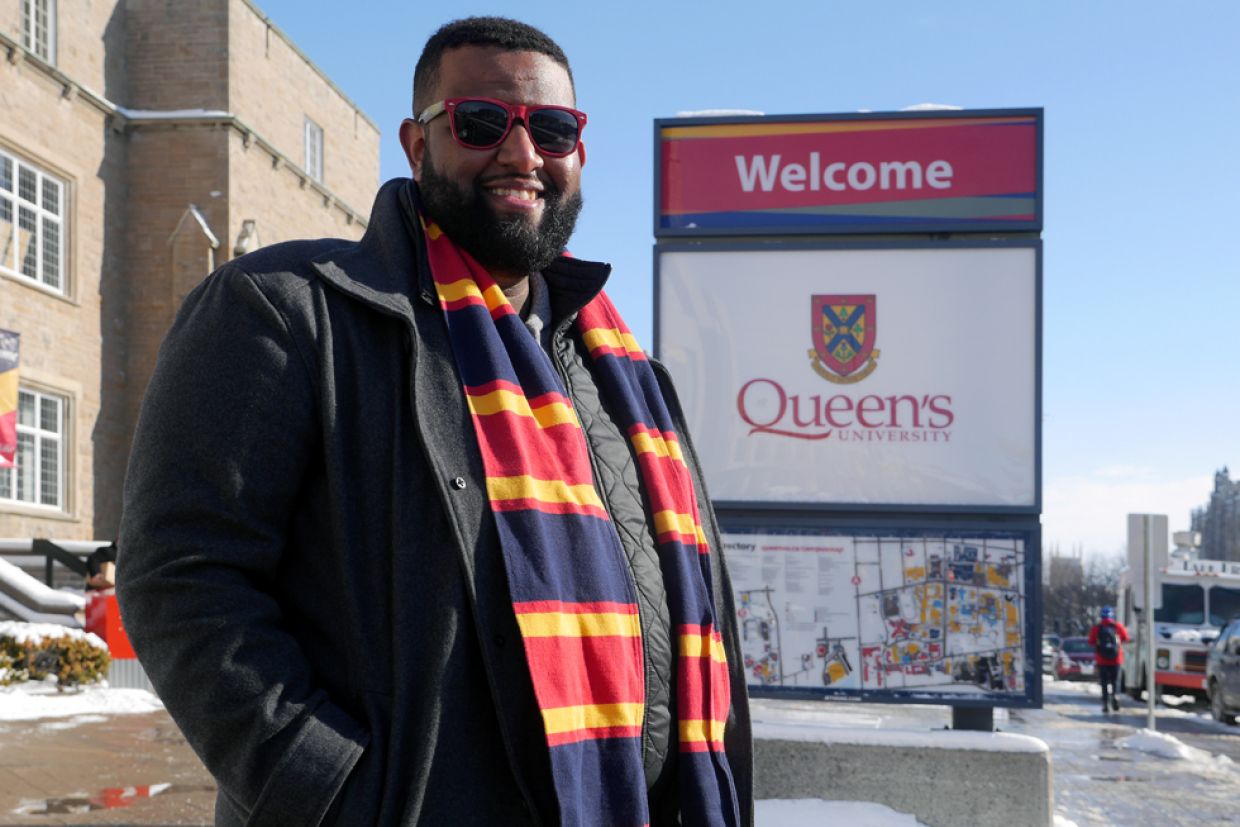 Elamin Abdelmahmoud, Artsci’11, Talks about his Career and Queen's Progress in Equity

Elamin Abdelmahmoud, Artsci’11, is a rising star. A journalist living in Toronto, Elamin is a culture writer responsible for the BuzzFeed News weekly newsletter, a podcast host for three CBC shows, and will soon release a book with McClelland & Stewart, a publisher he shares with literary heavyweight Margaret Atwood. Elamin joined us to talk about his childhood in Kingston, how his Queen’s education has influenced his career, and details on his upcoming book, Son of Elsewhere.

Moving to Kingston from Sudan

Though Elamin’s father was most familiar with Toronto when he immigrated from Sudan, a visit to Kingston convinced him that it would be the safest community to raise his family. Elamin, then 12, recalls the biggest challenge of arriving and attending elementary school. “Honestly, the language piece was probably the biggest piece for me,” he says. “I didn’t even have a chance to take in my surroundings very much, as I was just trying to figure out how to speak English and communicate with people. I only knew five or six sentences, including ‘where is the bathroom?’”

A small local Sudanese community helped with the transition. “We just hung out a lot,” he says. “A lot of those kids were born here, so their experience was a little different from mine, but they told me, ‘we are the same, so we are going to help you.’”

Queen's and his career

At Queen’s, Elamin studied philosophy before switching to gender studies in his final year.

His career started at the CBC, where he worked as a production assistant. His first full- time job was at TVO’s The Agenda. “Think of back in 2013 and 2014,” he says. “The world of journalism wasn’t asking a lot of connective questions. No one was asking, ‘how do we connect inequality and racism effectively? How do we connect wildfires and climate change effectively?’ In gender studies, I learned to look for these connections. That gave me a significant advantage of being able to critically think about a problem and dig deeper for the bigger story.”

As conversations about anti-Black racism become more commonplace on campus, Elamin reflects on his Queen’s experience. “What’s happening at Queen’s has always been happening at Queen’s,” he says. “Queen’s has always been having this conversation. The frame for it has gone from equity to diversity, but there has always been this constant thread of a struggle. I went to high school in Kingston, so I figured it was going to be the same thing. I became aware of larger conversations about racism and institutional racism at Queen’s through students and professors who have been studying these issues for a long time, and wondered what they were talking about. And they explained to me that there is so much more progress to be made. That was a lesson for me.

“While I was there, the Miss Ethiopia blackface incident happened. The Henry Report was framing most of the conversations. It’s interesting to realize that these issues end up repeating themselves. It’s helped me understand that you never really get there. You try to get there and do it as gracefully as you can, but every once in a while people are going to remind you that you are not moving fast enough. And you have to accept that, because no institution can move fast enough.”

Elamin’s new book, a collection of essays, is inspired by his experience growing up in Kingston. “The pivot points are about identity. When I moved to Kingston, I felt the need to evaporate a lot of aspects of my identity in order to blend in,” he says. “And slowly over time, that unravelled. Slowly over time, I realized that it’s not a healthy way to live, to suppress parts of my identity. The book is about revisiting those identities and making peace with them. There is a whole thought process behind inviting yourself to suppress those things and then deciding not to do that anymore.”