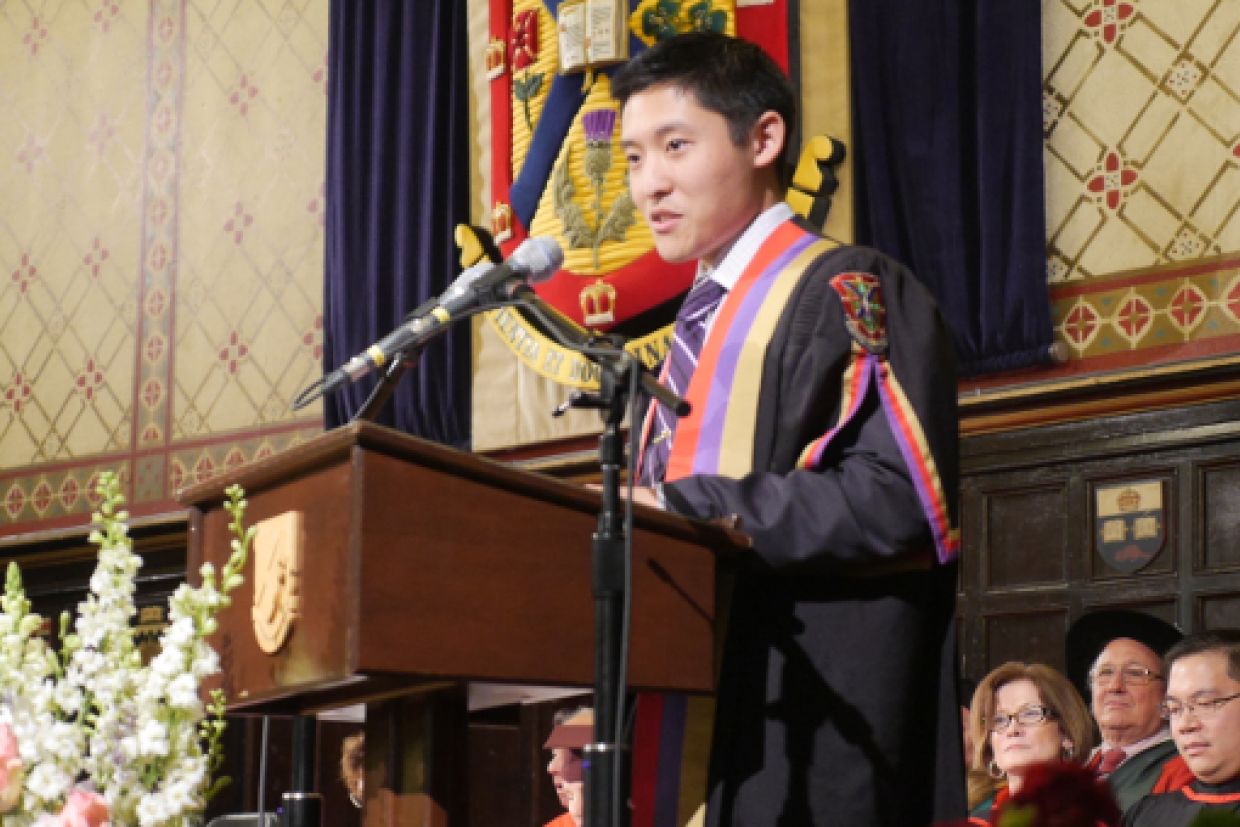 Cam Yung, Artsci’18, who served as Queen’s rector from 2016 to 2018 and worked hard to promote healthy behaviour on campus, will be honoured for his dedicated service at the Queen’s University Alumni Association’s Awards Gala on April 6.

Mr. Yung will receive the Outstanding Student Award, which recognizes students who encourage and promote alumni and student connections and is an inspiration to the Queen’s student community. Mr. Yung is one of 12 people and one organization to be honoured at the event.

“I saw from day one how involved people were at Queen’s,” says Mr. Yung, who returned to his hometown of Calgary after graduation and now works as a constituency assistant in the office of Liberal MP Kent Hehr. “You saw it through Orientation Week leaders, the student governments, and the high number of student clubs on campus. There is a culture at Queen’s that encouraged me to get involved during my time there.”

Volunteering has always been important to Mr. Yung. He was his high school’s student council president and continued to be active upon arriving at university. He was heavily involved in the Residence Society at Queen’s, serving numerous roles such as residence facilitator and vice president of Judicial Affairs.

The biology graduate was also an Arts and Science Undergraduate Society (ASUS) Orientation Week Gael and volunteered with several groups, such as the AMS Food Bank.

One of his main priorities during his term as rector was promoting responsible student behaviour. He advocated for an update to the Campus Alcohol Policy, co-chaired the Alcohol Working Group within Queen’s Student Affairs, and worked with Queen’s For The Boys to raise awareness and mitigate the negative impacts of drinking.

Agnes Benidickson Tricolour Award recipient Jennifer Williams, Artsci’16, MSc’18, worked closely with Mr. Yung on numerous campus projects. She said he was a proud Queen’s supporter who always found time to listen to students’ concerns and advocate on their behalf.

“Cam has been an inspiration to me because of the principles he embodies as a student leader,” says Ms. Williams. “He passionately advocates for students, actively listens, and is humble and honest. It has been a joy to watch Cam grow and excel over the past six years.”

Online registration for the QUAA Awards Gala closes on March 27. Visit the Queen’s Alumni website or email the QUAA to learn how to nominate an outstanding alumnus or alumna for an award.