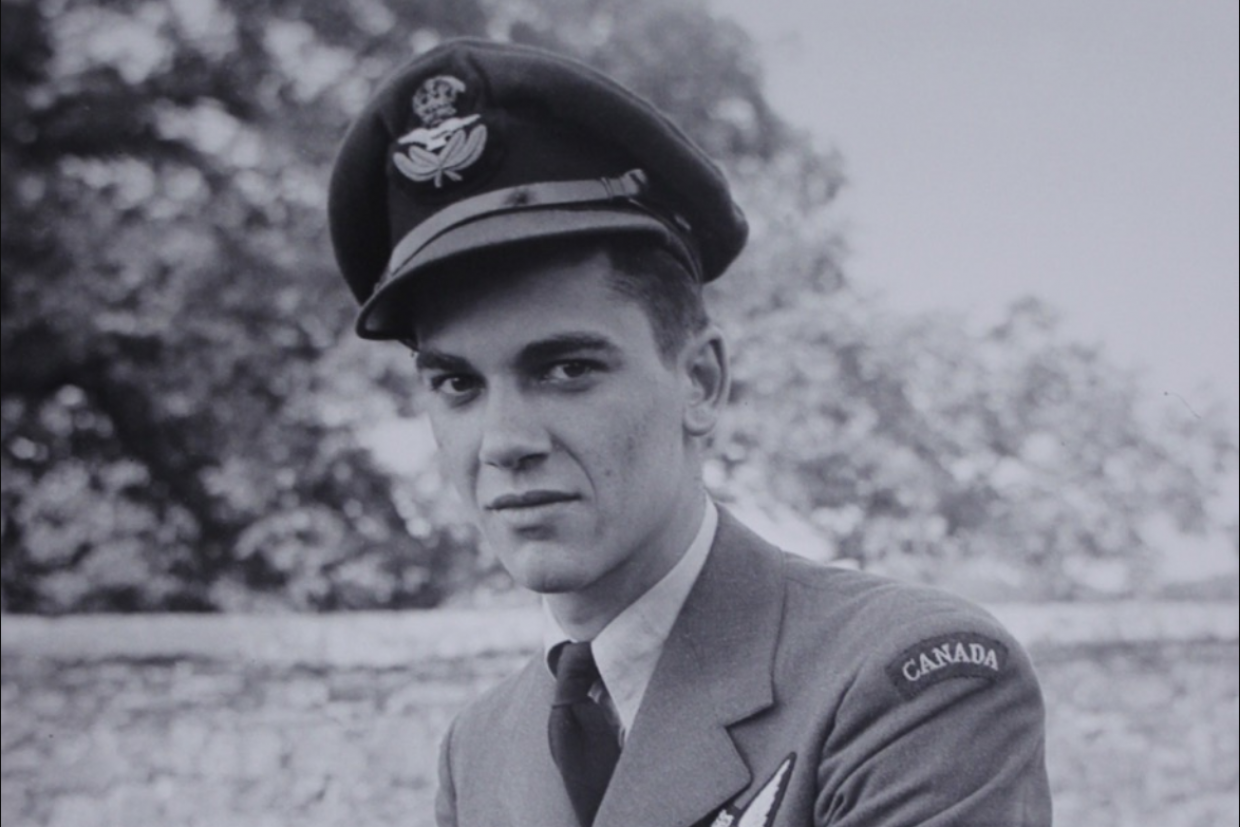 Heroism and hockey: Stu Crawford was the ultimate Gael

Stu Crawford very nearly lost his life when he was a 23-year-old bomb aimer during the Second World War. It was 1945 when his plane came under heavy fire while on a mission to Hamburg and began a perilous descent, forcing him to leap from his Lancaster with only a parachute. He survived the jump, and a subsequent walk through a field of landmines, before making it to safety and, eventually, a return to his home in Canada.

It turned out, Crawford had a lot more life to live.

A star player for the Gaels hockey team from 1947 to 1951, the long-time circulation manager of the Kingston Whig-Standard, and most recently, the star of a short film that was shown at Homecoming.

His niece, Karen Elliott, said her uncle skated and skied until he was in his 90s, and that he remained humble – and good-humoured – until the end.

“He was such a humble man,” Elliott recalled. “He’d say, ‘I don’t deserve anything for that, and we’d say, ‘Yes, you do.’ He just didn’t like the attention.”

Francis Stuart Crawford grew up in Kingston, the second youngest of four sons – all avid hockey players who learned the game playing on the frozen Cataraqui River behind the house where they grew up.

Crawford joined the Royal Canadian Air Force during the Second World War and after the war returned to Kingston to study philosophy and psychology at Queen’s, where he played hockey with the Golden Gaels. He held on to vivid memories of the crunch of his skate blades on the ice – “walking on history” – as the thunder of the crowd roared through the Montreal Forum for a game against arch-rival McGill.

“There were 8,000 fans there – 8,000 screaming McGill fans,” he told the Queen’s Alumni Review earlier this year. “You can imagine what that was like.”

Crawford worked for decades at the Whig-Standard, retiring in 1987. Until just a few years ago, he still played hockey once a week in Gananoque. He served as an honorary coach with the Gaels from 1986 to 1989 and his love of the sport was legendary among those who knew him. In 1986, Crawford and some hockey friends decided there needed to be some honour for Queen’s annual match with the Royal Military College. And so was born the Carr-Harris Cup, a celebration of a hockey rivalry perhaps older than that with McGill.

Crawford, the oldest living Gaels hockey alumnus, never lost his passion for the game or his beloved Gaels. The team was so touched by Crawford’s dedication and loyalty through the years that they had planned to honour Crawford at the 35th Carr-Harris Cup with a replica Golden Gaels sweater like the one he wore during his playing days. Sadly, the Carr-Harris Cup was suspended for the 2022 season. Crawford received the gift a little later, along with another honour from the team. On his 100th birthday on March 2, the club officially named its dressing room at the Memorial Centre “The Stu Crawford Team Room.”

"The men's hockey dressing room will forever be known as the Stu Crawford Team Room," said Queen's Men's Hockey Head Coach Brett Gibson at the ceremony. "This is a permanent testament to the character of Stu Crawford, and a constant reminder for the players to look to when they enter the room of what it means to be a Gael. We also have an article in the dressing room chronicling Stu's accomplishments over his 100 years so future Gaels realize what an impact he made on the Program."

A story about the ceremony in the Alumni Review caught the eye of filmmaker Mike Downie, who promptly assembled a crew to create A Century in the Making: The Stu Crawford Story, the very first movie produced by Downie’s Courage Films. The film was shown in Mitchell Hall at Homecoming – prompting both smiles and tears as Crawford regaled the camera with stories of a life well lived.

"Stu Crawford will remain an inspiration for all of us lucky enough to have met him," said Mike Downie. "He understood that if you're a good person, if you stay engaged and curious, if you take care of your family and friends, and say yes more than you say no, you too can live a great and meaningful life."

Dave Descent, president of the Men’s Hockey Booster Club who remained close to Crawford in later years, told the Alumni Review that Crawford was not just “a quality player” but that he emphasized “the tradition and the respect that our team brings.”

“I was just a plain old hockey player,” Crawford said near the film’s end. But those who knew him knew that Crawford was anything but plain.

“We are all saddened by the loss of this incredible alumnus,” said Karen Bertrand, Vice-Principal (Advancement). “He lived his life fully, finding joy in giving back to his team, and demonstrating the kind of resilience to which we can all aspire.”