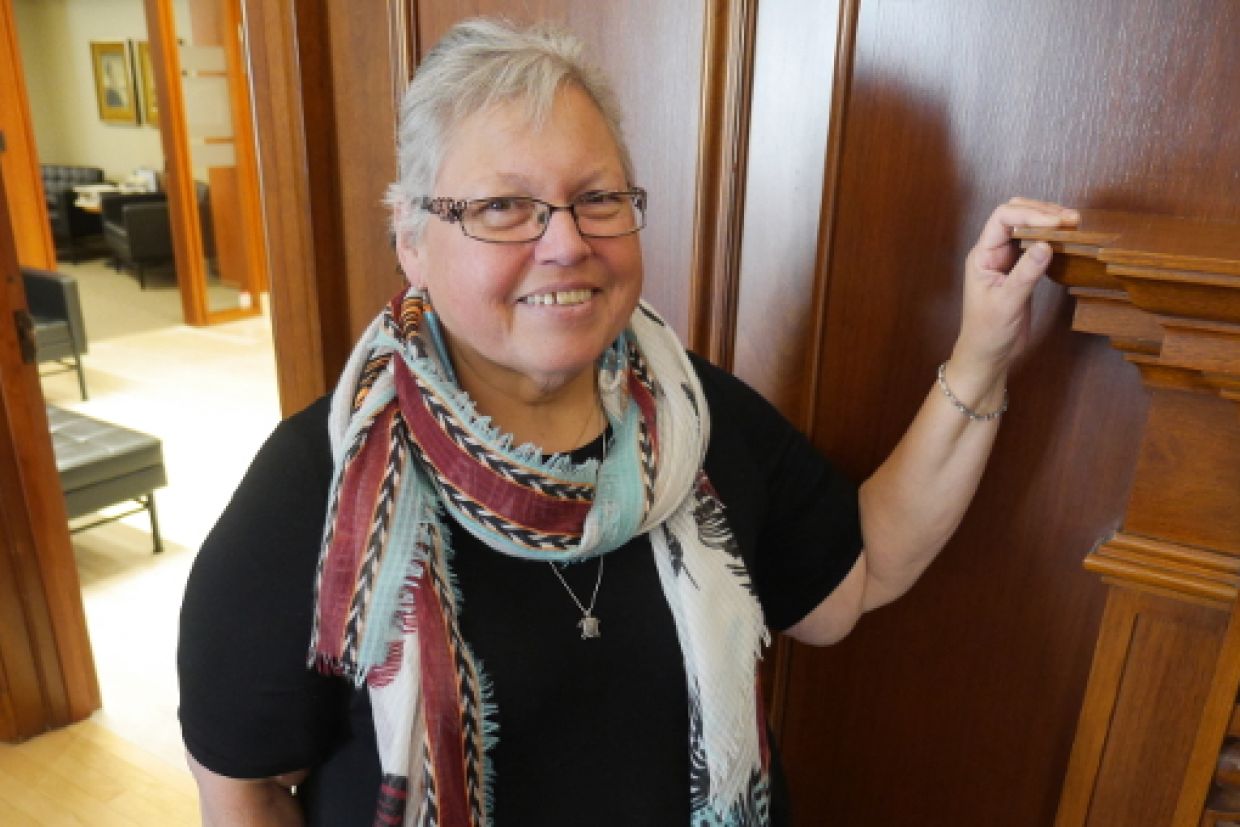 Queen’s University Director of Indigenous Initiatives Kanonhsyonne Janice Hill, Ed’99, doesn’t think of herself as a mentor because helping others is just a part of her Mohawk culture.

“Culturally it is my job to help those who come after me to realize their own worth, do good work in the world, and be good human beings. So if I can help somebody find that path for themselves, then that is fulfilling,” says Kanonhsyonne.

Many members of the Queen’s alumni community and hundreds of students who passed through the doors of the Four Directions Aboriginal Student Centre – where Kanonhsyonne spent seven years as director before being appointed the inaugural Director of Indigenous Initiatives at Queen’s – might still call her a mentor.

For her work with the Indigenous community at Queen’s that spans decades and for her unwavering dedication to creating a supportive community for Indigenous students, Kanonhsyonne is being honoured with the Queen’s University Alumni Association’s Alumni Mentorship Award. She will receive the award at the QUAA Awards Gala on April 7 in Ban Righ Hall.

“I was very surprised and really overwhelmed. Receiving the award is a huge honour,” says Kanonhsyonne.

Many Indigenous students are the first in their families to attend university. They are leaving their communities, and many have to make a cultural adjustment to life on the Queen’s campus. Kanonhsyonne, who has worked in Aboriginal education for more than three decades, went through this experience herself and works hard to make Queen’s a place where Aboriginal students want to come and can thrive and be successful.

She worked with school administrators to clear obstacles in the paths of Indigenous students, whether that was hiring a recruiter to attract more Indigenous students to campus, encouraging staff and faculty to identify as Indigenous, or expanding the capabilities of the Four Directions Aboriginal Student Centre by adding more staff and programs. She also works with students one-on-one, giving them support and advice.

One of the students she has helped is former Queen’s Native Student Association president Lauren Winkler, Artsci’17. She considers Kanonhsyonne her biggest role model and often turns to her for guidance when making decisions that affect the Indigenous student body.

“She shows me how to positively and constructively use my voice in a leadership position to uplift the voices of Indigenous students who may not otherwise get the opportunity to voice their concerns,” says Ms. Winkler.

Marlene Brant Castellano, Arts’55, LLD’91, is the co-chair of the Aboriginal Council of Queen’s University and has seen Kanonhsyonne work tirelessly to open doors for students at Queen’s over the years.

“She has drawn on her deep appreciation of Indigenous culture to clear a path for students and colleagues to realize their own capacities to transform their environment. She is an extraordinary mentor,” says Dr. Brant Castellano, who is being honoured herself at the QUAA Awards Gala with the Alumni Achievement Award.

Tickets are now available online for the QUAA Awards Gala on April 7.