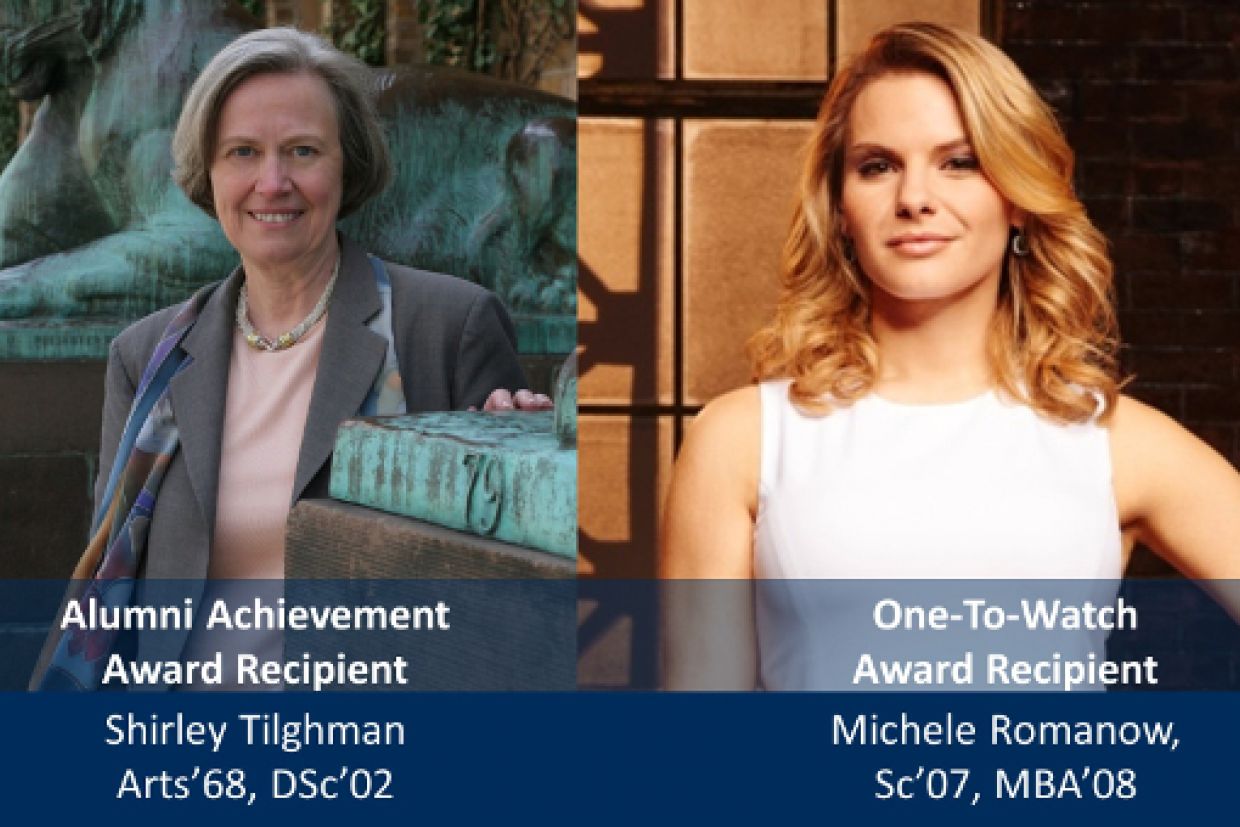 Shirley Tilghman, Arts’68, DSc’02, is a leading molecular biology researcher and was president of Princeton University for 12 years. Michele Romanow, Sc’07, MBA’08, is a successful entrepreneur who has started four companies, including the Tea Room at Queen’s, and is now a panellist on the popular CBC TV show Dragons’ Den.

They are both are being honoured at the Queen’s University Alumni Association Awards Gala on April 2 and both credit Queen’s for giving them the tools to launch successful careers.

Dr. Tilghman is receiving the Alumni Achievement Award – the highest honour presented by the QUAA. Past recipients include astronaut Drew Feustel, PhD’95, Governor General David Johnson, Law’66, and sculptor Adrienne Alison, Artsci'76. Ms. Romanow, who is only 30, is receiving the One to Watch Award, which is given to a graduate (fewer than 10 years out) who is making significant contributions to their field.

Dr. Tilghman felt Queen’s was a place that cared deeply about giving her a good education.

“My four years at Queen’s were glorious! The wonderful opportunities that the faculty in the Department of Chemistry afforded me to experience what it means to do research – as opposed to reading about it – are responsible for my becoming a scientist, says Dr. Tilghman. “The generous mentorship and encouragement at a time when few women were entering careers in science made all the difference in the world and my future.”

Dr. Tilghman, who studied chemistry, is grateful for some honest advise her chemistry professor gave her which had a profound and positive impact on her life – he told her that he did not think chemistry was right for her.

“He said I should think about what other branches of science to pursue. It sounds cruel but he was doing me an enormous favour. That’s what led me on the path where I eventually ended up – molecular biology,” says Dr. Tilghman.

Ms. Romanow’s first business venture happened while she was a student at Queen’s. She launched the Tea Room, which at the time was North America’s first zero-consumer-waste coffee shop. The project took two years to get off the ground and she had to negotiate with various school officials and student organizations. She raised capital by organizing fundraisers and entering business plan competitions. It was profitable in its first year and is still around almost a decade later in Beamish-Munro Hall.

“Giving students responsibility and the right to run things and make mistakes is really important. That was one of the greatest parts of Queen’s. I honestly do not believe I would be an entrepreneur if I hadn’t started a business so early in my career,” says Ms. Romanow, who received the Agnes Benidickson Tricolour Award in 2007.

Do you know any outstanding alumni? Email the QUAA to find out how to nominate someone for next year’s QUAA Awards.