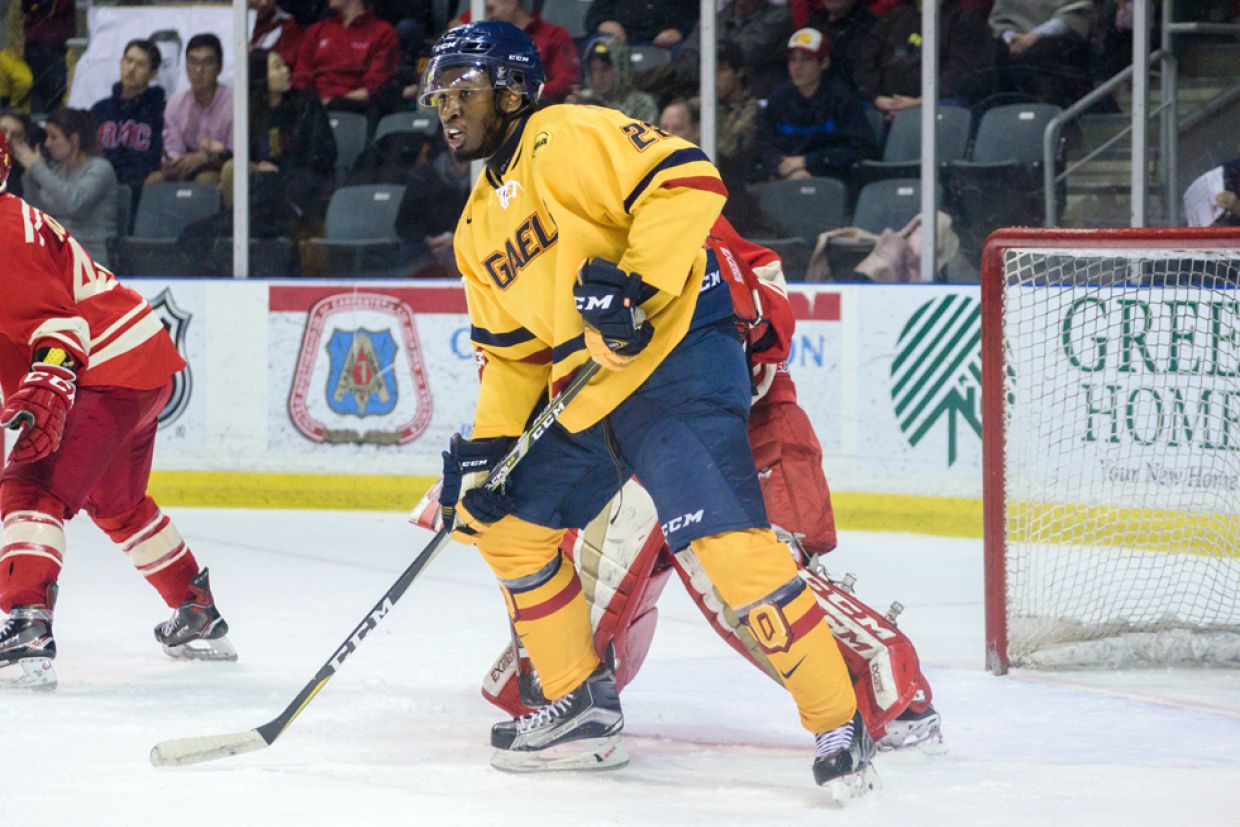 Jaden Lindo, Artsci’21, GDB’21, knows what it’s like to be the only person of colour on a hockey team.

“I want to help remove the barriers I went through and give back to the community that has given me so much,” he says. Lindo will have the opportunity to give back and help break down the barriers that impacted him as a child as the Pittsburgh Penguins Foundation have named the former Gael Manager of Community Hockey Programs.

The Penguins Foundation has been focused on improving diversity in Pittsburgh and hockey communities the last few years, and Lindo’s experiences have given him the background to excel in his new job.

Lindo has understood the importance of diversity, representation, and inclusion within the sport ever since he was a child in Brampton, Ont. Lindo grew up watching hockey on TV and from a young age knew that he wanted to go pro. He began playing hockey at age five on a local youth team, and at age six he faced his first instance of racism while playing hockey, where he and his parents were harassed during a game simply because they were not Caucasian. It wasn’t until three years later that he played with another person of colour.

Lindo was a natural on the ice. From 2012-2017, he played in the Ontario Hockey League. In early 2014, he tore his ACL, leading him to believe that his hockey career was over. Despite the injury, Lindo was drafted by the Pittsburgh Penguins in the sixth round (173rd overall) of the NHL 2014 Draft.

While he played, Lindo immersed himself in volunteering, community programming, and promoting diversity within the sport, which led him to being recruited to star in Soul on Ice, Past, Present & Future (2015), a documentary about the contributions of Black athletes in North American hockey.

Although he never played a game in the NHL, Lindo kept his hockey career alive at Queen’s. From 2017-2021, he played for the Gaels and was named MVP of the 2019 Queen’s Cup championship, which he helped the Gaels win. While a student, he continued his advocacy work and assisted the team in promoting and raising money to support the Hockey Diversity Alliance's initiatives to eradicate racism from hockey. Lindo also shared his experiences at the Roundtable on Racism in Hockey alongside numerous members of the hockey community, which Queen’s hosted in 2019.

Lindo’s passion for volunteerism and advocacy led him off-campus, where he raised funds for the Special Olympics by leading team-building exercises and promoting inclusion, from 2018 up until this year.

This strong background of volunteerism, community building, and promoting diversity and inclusion caught the Penguins Foundation’s attention as they were searching for the perfect candidate to fill the new management role. Lindo’s duties will include overseeing The Willie O’Ree Academy and hockey programming for Pittsburgh youth at city community centres.

“I got a text message when I was in one of my Graduate Diploma in Business classes from an unknown number saying that the Pittsburgh Penguins Foundation wanted to talk to me about an opportunity,” said Lindo. The text message was sent from Penguins Foundation Executive Director Jim Britt. Britt and his team had been searching for the right candidate to fill the newly created manager position for months and heard of Lindo through Soul on Ice: Past, Present & Future director Damon Kwame Mason. “It was perfect timing as my program was coming to an end, and I was struggling to figure out what path to go down,” Lindo says.

The Penguins specifically wanted to hire a person of colour for the position. They wanted the new manager to be able to relate to their diverse youth players and community members, and for the players to be able to see themselves in their coaches, staff, and mentors.

“I’ve always wanted to make a difference in hockey, whether on the ice or off,” says Lindo. This position allows him to influence future leaders in hockey and, hopefully, leave the sport in a better place than when he started. Lindo said, “I want to help remove the barriers I went through and give back to the community that has given me so much.”