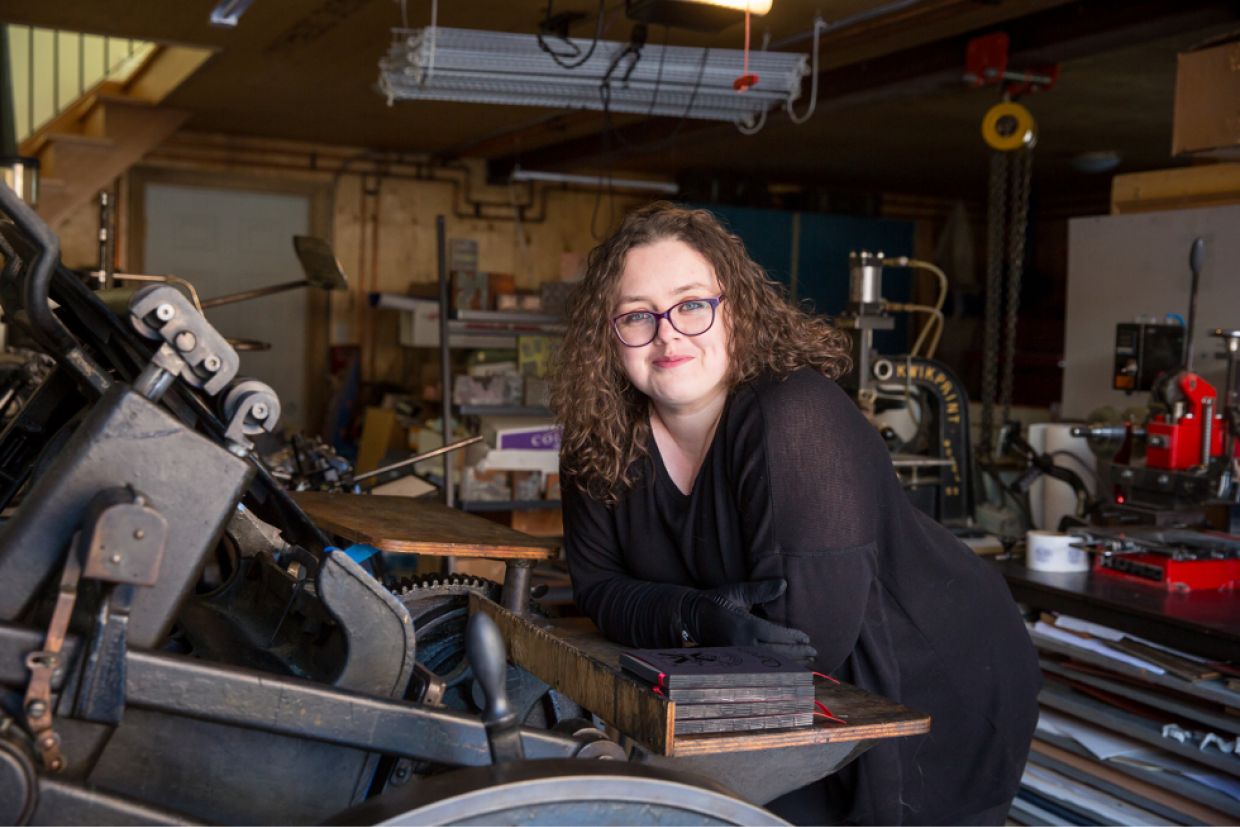 Alissa Sokolski, Artsci’09, designed and created more than 7,000 notebooks for the #180For180 initiative.

For Alissa Sokolski, Artsci’09, designing and handcrafting more than 7,000 notebooks for the Queen’s #180For180 initiative was a dream project on many levels.

Queen’s wanted to do something special for the Class of 2020, which graduated under the challenging circumstances of COVID-19. So, the #180For180 challenge was launched, and every graduate was sent a package containing a letter asking them to donate 180 minutes of their time in honour of Queen’s upcoming 180th anniversary. The package included a handcrafted vintage-style notebook — made by Sokolski’s Toronto print shop, Any Key Press — where the grads are encouraged to chronicle their experiences.

Sokolski’s design was inspired by materials published the last time Queen’s went through a pandemic — the 1918-20 Spanish Flu.

“Before we even finished our first conversation (about the project), I was looking up the Queen’s Archives and searching for reference material. As soon as you say ‘We are looking at something from 100 years ago,’ I am there,” says Sokolski, who studied Classics and jokingly calls herself a gigantic history nerd. “The first title page, as soon as you open the notebook, has the original (university) crest, and even the layout of the page is a direct copy of the 1920 Queen’s course catalogue.”

She worked with local suppliers, supporting small Ontario print and bindery shops and a Quebec-based handcrafted paper maker in an effort to keep the work as local as possible while supporting hard-hit Canadian trades. The final stages of edge painting, and adding bookmarks and elastics, were done by hand in the Any Key Press workshop by a team of four, ensuring that the project was completed quickly, in spite of extensive COVID-19 limitations.

Any Key Press offers digital printing services, but its main focus is on letterpress, which utilizes antique printing presses. The antiquated technique, which is often used for wedding invitations, was a perfect fit for the Queen’s notebook project. Sokolski’s oldest printing press, which is 100 years old (lovingly dubbed “Hank, the Beast”), was used to make the bookmarks that were included with the journals. These bookmarks were personally signed by 180 alumni with notes of encouragement to further inspire the Class of 2020.

A large part of Sokolski’s work is based around weddings and events. When COVID-19 hit in March and those industries shut down, she worried she might have to close her doors. She now says her professional future has pivoted 180 degrees because the #180For180 project reminded her of the importance of preserving her unique craft.

“This project has fueled the fire to keep going,” she says.

She was so inspired by the #180For180 challenge’s message about giving back that she donated $1,000 of her profits to Kingston’s Partners in Mission Food Bank.

“Giving back is an important thing to do, especially now,” she says. “I wanted to make a donation directly to the Kingston community. Having been a student, I am very grateful for my own experience both at Queen’s and in Kingston, so it was simply the right thing to do.”