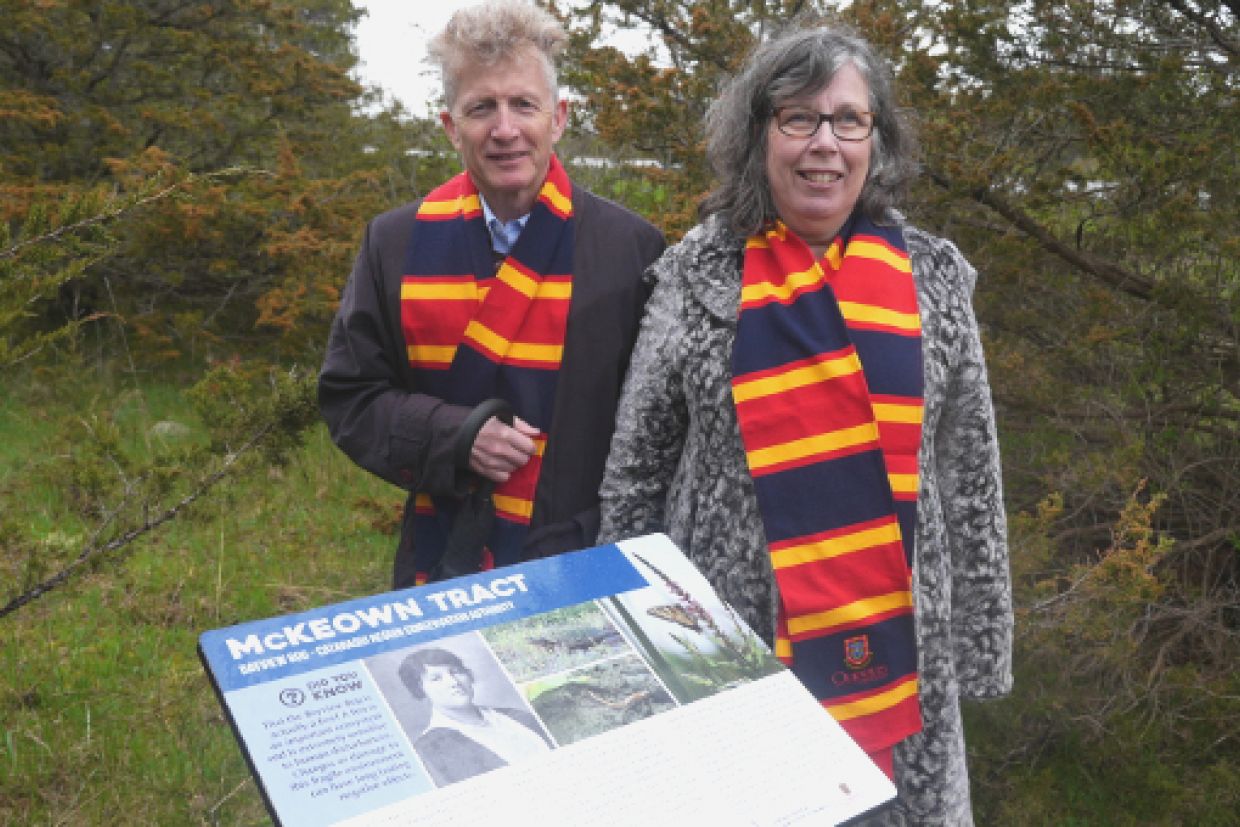 Students and researchers have access to ecologically important land and a wider range of plants, animals, and insects for field studies, thanks to the generosity of a Queen’s family.

Larry McKeown, MA’86, and his sister, Anna Kelly, Artsci’81, Ed’81, donated an 18-hectare tract of the Bayview Bog that has been in their family for decades. The land, located along Taylor Kidd Boulevard about 20 minutes west of the Queen’s campus, was donated to honour their grandmother, Kathleen McKeown (nee Ralph). Ms. McKeown, who graduated in 1916, was a popular member of the Queen’s community.

Biology professor Vicki Friesen is excited the university has access to the land because fieldwork and hands-on learning is an essential part of the Queen’s student experience.

“When students get out in the field, the light in their eyes changes,” says Professor Friesen. “It’s awesome to see. They learn more by studying organisms and their interactions in nature, rather than pictures and words in a book.  Once you see the plants and animals, they become more real and important.”

Despite the name, the Bayview Bog is actually a type of wetland known as a fen. Only a small amount of water drains out, which makes it very wet and nutrient-poor, so the land is often home to rare plants, insects, and small animals. Fens require thousands of years to develop and cannot be easily restored once destroyed. Fens are also important to reduce the effects of climate change because wetlands absorb large amounts of carbon dioxide.

“A fen is completely different from a forest or a river ecosystem,” says Professor Friesen. “So Queen’s students now have better access to see and study a wider range of plants and animals out in the wild.”

The McKeowns originally wanted to donate the property directly to Queen’s to commemorate the 100th anniversary of their grandmother’s graduation. But because it was ecologically sensitive land, it was placed under the stewardship of the Cataraqui Region Conservation Authority (CRCA). A partnership between Queen’s and the CRCA allows students and researchers access to the land.

The Bayview Bog is one of several outdoor areas available to Queen’s students and researchers. The most well-known is the Queen’s University Biological Station (QUBS) which opened in 1944 on the shores of Lake Opinicon, 50 kilometres north of Kingston. It has expanded to more than 3,400 hectares and is now one of the top scientific field stations in Canada.