Richi Tam, BCom’13, knows firsthand how it feels to be sinking in the uncharted depths of mental illness, and to resurface on a relatively safe and stable shore. 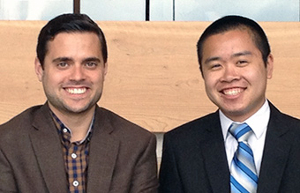 Thanks to Richi’s own tenacity – and the support of his Queen’s School of Business classmates, faculty and staff members – he has turned what might have been a life-ending experience into a testament to the strength and healing power of community.

In 2011 Richi began what he hoped would be a great adventure, after completing a stressful second year in Queen’s Commerce. But his international exchange experience at Singapore Management University soon turned dark, and his earlier struggles with mental illness came to a head in the form of auditory hallucinations and suicidal thoughts.

Fortunately Richi’s academic advisor at Queen’s School of Business was able to arrange for his immediate return to Kingston and “helped me sort things out,” he recalls now. “That was a huge boost, when I needed it most.” After taking the rest of the year to get better, Richi was ready to return to study – but with a different group of students from his Com’12 classmates. His biggest fear was that he would be treated like an outsider and might find it hard to make new friends.

As it turned out, the exact opposite occurred. “The class of ’13 made me realize I was surrounded by people who really cared – not just students, but faculty and admin, too – who were all very supportive, wanting to make sure I was okay,” he says.

In May 2013 Richi graduated in the top 10 per cent of his class and volunteered to be the group’s giving coordinator. He and classmate Kate Moraca created the Commerce Legacy Fund for Student Health and Wellness, which provides support for mental health initiatives to benefit Commerce students.

Through the Dean’s Matching Fund, a new initiative made possible by donations from several anonymous benefactors, gifts from young School of Business alumni who graduated in 2004 or later are matched 2-to-1. That fund will add $2,000 to Richi’s initial $1,000 pledge – one of the first such matches since the fund was established. Richi’s employer, KPMG Kingston, is contributing another $1,000 through its own matching program.

Now a staff accountant at KPMG, Richi is working toward his CA/CPA designation and is excited about his career opportunities ahead. Reflecting on the rollercoaster of the past several years, he says: “There was a lot of pain, but I think I’ve come a long way and am in a much better place now. It’s true that Commerce is a competitive program, but at the end of the day students are very supportive, too. I’m so grateful for the awesome people in my class.”

Richi’s journey back to good health has been a team effort, he emphasizes. With the help of his psychiatrist and a strong support system, he is managing his recovery – and will continue to do so.

Class giving campaigns are a powerful way to give back collectively to Queen’s. Annual class gifts support much-needed student bursaries and scholarships, library acquisitions, leading-edge technology and other programs and projects that are most meaningful to each graduating class.