Members of the Queen’s and Kingston communities are fondly remembering the tremendous impact of one of the university’s most prominent and beloved benefactors, Isabel Bader, LLD’07.

Bader – who passed away on Aug. 28 in Milwaukee at the age of 95 – along with her husband, Alfred, BSc’45, BA’46, MSc’47, LLD’86, made numerous transformative gifts to Queen’s, including the Bader Collection, comprising more than 500 works of art (including several Rembrandt paintings), Bader College (Herstmonceux Castle in England), and the Isabel Bader Centre for the Performing Arts. The couple endowed chairs and created numerous bursaries and awards to advance education and research.

There has been an outpouring of support on social media from many people – including school administrators, politicians, alumni, and current students – thanking Isabel Bader and reflecting on her legacy.

“On behalf of all of us at @queensu I extend my deepest condolences to Isabel’s family and to the family of her late husband, Alfred.

Alumnus and Kingston and the Islands MPP Ted Hsu, Artsci’84, released a statement saying Bader’s spirit will always remain an integral part of the community.

“Whether it be through her curatorship in Indigenous arts and culture, the Bader Collection, or the revitalization of the Agnes Etherington Art Centre, her interest in the preservation of cultural materials, her passion for the arts, her scholarship support of students at Queen’s University and through Sistema Kingston, Isabel’s presence in and devotion to our community will be missed,” Hsu said in a statement. 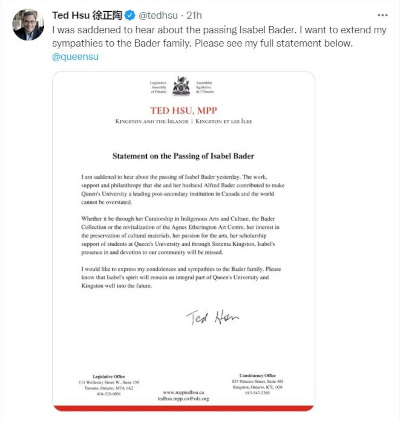 Bader, a passionate supporter of the arts, personally created several bursaries to help students in music, drama, and textile conservation.

“As a recipient of a bursary supported by her and her late husband, I can personally say how much their philanthropy meant to so many students,” Woodhall wrote on Twitter. “It afforded me an opportunity to attend the Castle that I wouldn't have otherwise had. May her memory be a blessing.”

Queen’s Vice Principal (Advancement) Karen Bertrand, Artsci'94, wrote on Twitter that Isabel was one of a kind and “her passing will be felt throughout the Queen’s community.”

Jan Allen, former director of Agnes Etherington Art Centre, commented that Bader was a “powerhouse” and she enjoyed having the opportunity to work with her.

“She had a rich and full life and made a beautiful impact for change in the arts and in transforming the lives of young scholars,” Allen wrote on Facebook.

On Instagram, Johanna Strong, Artsci’17, MA’19, said together Alfred and Isabel “changed so many lives through their generosity and commitment to education. They will be deeply missed, but they have left a wonderful legacy.”