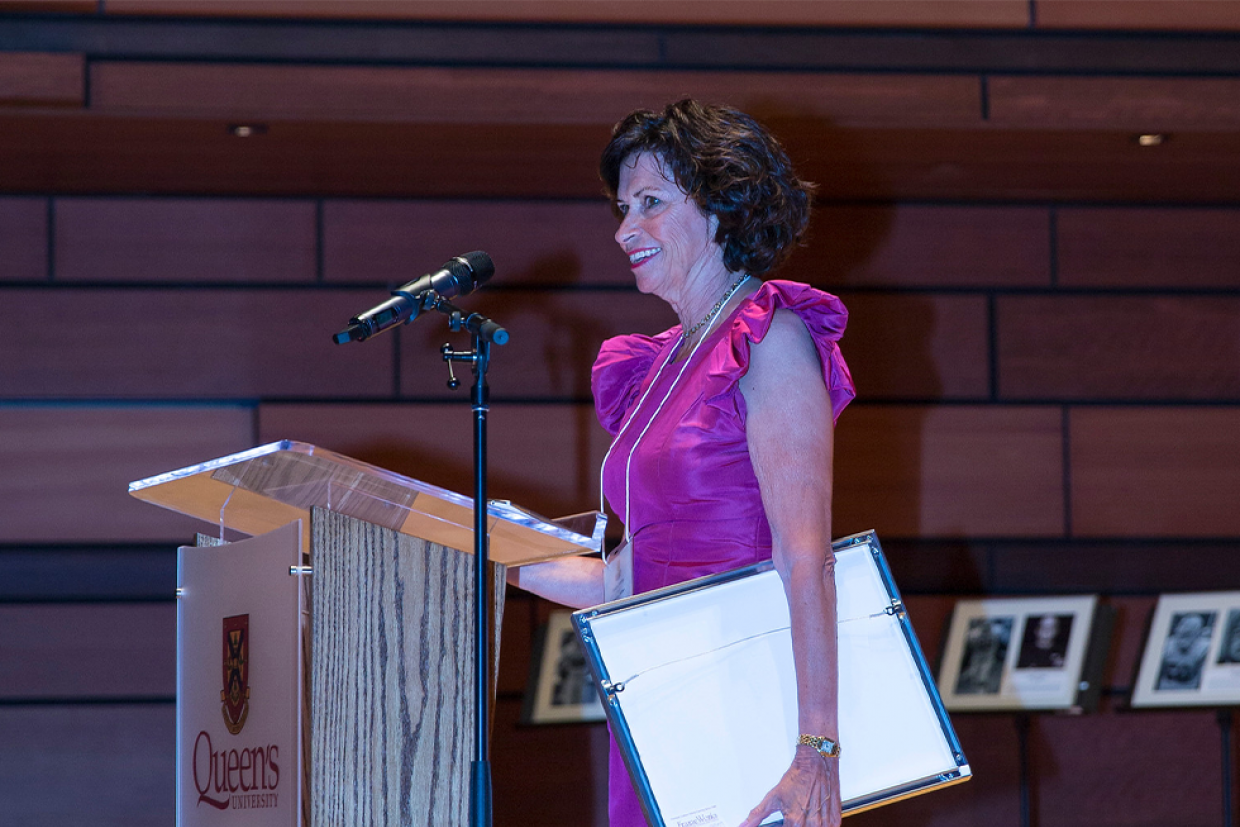 Like many who go to Queen’s University, Sandra Macdonald was captivated by the school’s spirit.

So much so, that the girl from Glebe Collegiate Institute in Ottawa soon gravitated to the grassy field that was Richardson Stadium, the site of so many triumphs for the Golden Gaels.

She was a member of the Queen’s University Bands and became a majorette, beginning a lifelong attachment to the team, the stadium and the school.

That love affair was cemented by another that was deeper and long lasting — her marriage to Kent Plumley, who was a star player on the football team from 1957-1963 and who would go on to become a member of the university’s football hall of fame.

Sandra Plumley, as she became after her marriage, died Nov. 7, 2021, pre-deceased by her beloved husband Kent in 2015. She is survived by her daughters, also Queen’s graduates, Christa Plumley, Com’94, and Julia Plumley, Artsci'96/PHE’96, and her five grandchildren, to whom she was devoted.

She will not soon be forgotten by anyone who dons Queen’s colours and plays on the field that now sits on Kingston’s west campus.

“Anyone who knew Sandra knew that she was dedicated to Queen’s,” said Karen Bertrand, Vice-Principal (Advancement). “Her journey at the university started when she was just a young woman, but it continued throughout her life. That kind of devotion is very special, and a testament to Sandra’s passion for the university, athletics, and student life. All of us in Advancement were honoured to work with her.”

Richardson Stadium is today recognized as a state-of-the-art sporting facility and much of that is due to the partnership of Kent and Sandra Plumley. Their role in the revitalization of Richardson Stadium was so important that the couple were both inducted as builders into the hall of fame in 2015, mere days after Kent’s passing. The main gate to Richardson Stadium – The Plumley Entrance – is named in their honour.

Kent and Sandra understood the need to revitalize the stadium to maintain and enhance the place and traditions of sport at Queen's and the school spirit that sits at the very heart of the university.

Sandra would get directly involved in the Stadium Pavilion project in 2006 as a member of the Fields and Stadium Campaign Cabinet, a group of alumni and faculty who worked with Athletics and Recreation to “revitalize outdoor athletics programs, allowing Queen’s to provide the best quality facilities to recruit, train and challenge top student-athletes.”

Sandra continued to remain highly engaged with the Queen’s Football program even after Kent’s passing, each fall purchasing season tickets for the Gaels, and was a long-standing donor and supporter of the Gael Force Dinner, an annual event that raised funds in support of athletic financial awards for the football team.

“I did not have the opportunity or the pleasure to know Kent, but Sandra’s passion and commitment to continue Kent’s vision for a new and improved Richardson Stadium has been both inspiring and significantly impactful,” said Leslie Dal Cin, Executive Director, Athletics & Recreation. “Sandra was an ardent ally of the Queen’s football team and university. She was a constant presence and an indispensable part of our alumni support group, for which we are eternally grateful.”

“Sandra was a ‘cheerleader.’ She was elegant and dignified and will be sorely missed by everyone that knew her. She was intelligent, empathetic, encouraging, and was a proud supporter of Queen’s Football for decades. Our condolences to the family, Julia, Christa, and all of the grandchildren.”

In addition to her involvement with the football program, Sandra was also a reunion committee leader for the Artsci'67 class for many years and was instrumental at rallying her classmates to support their class fund. The Plumleys also established family awards for worthy students in Arts and Sciences, Law, Smith School of Business, Physical and Health Education/Kinesiology and Health Studies, and Engineering and Applied Science.

“The support of the Plumley family has allowed me to attend my first-choice school of Smith School of Business at Queen’s University. Their award has opened many opportunities for me, and I am excited to major in finance and work towards my careers goals of being in high finance,” said Nadim Abdul Hamid, Com’24, a recipient of the Plumley Family Award in the Smith School of Business. “I honestly would not be here at Queen’s pursuing my dreams if it wasn’t for this award and the generosity of Mr. and Mrs. Plumley; I can attend classes and live out my dream here because of them. I am extremely honoured to be the recipient of this award, and this gift has motivated me to work hard so I, too, can leave a legacy as the Plumleys have.”

The Plumleys’ generosity touched the lives of countless people across the Queen’s community over the course of many decades. The loss, first of Kent and now Sandra, will be greatly felt by many. Their tricolour spirit will live on in the incredible legacy they created.