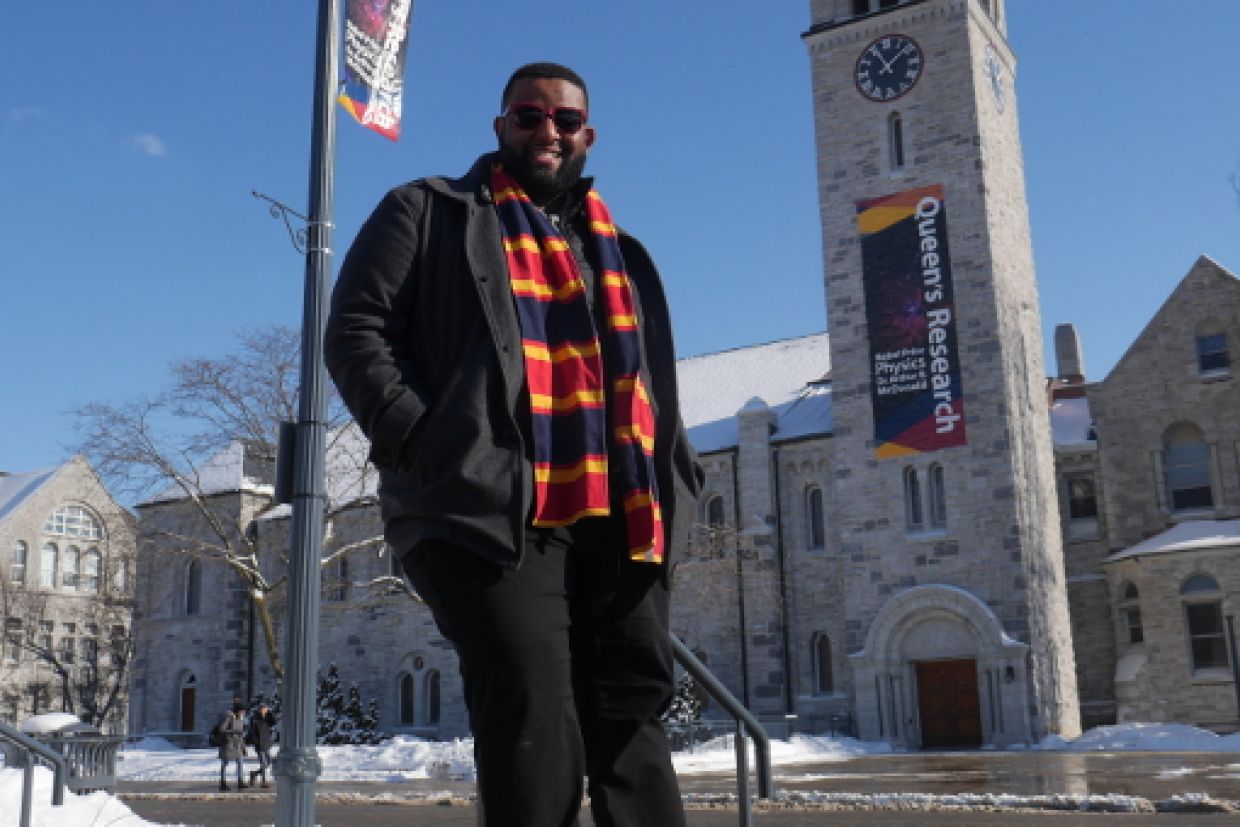 When Elamin Abdelmahmoud, Artsci’11, was a summer intern in Queen’s Marketing and Communications Department, he helped write a few speeches for Principal Daniel Woolf.

Things come full circle on April 7 when Principal Woolf gives a congratulatory speech about Mr. Abdelmahmoud, a BuzzFeed Canada editor and rising media star who is coming back to campus to pick up his One To Watch Award at the Queen’s University Alumni Association Awards Gala.

“I am so excited and so proud to be in the same company of some of the previous (One To Watch) winners. (CBC Dragons’ Den star) Michele Romanow comes to mind. Taylor Mann and Scott Mason who won for CleanSlate last year. I know them and they are wonderful people. So I am honoured to be considered in the same company as them.”

Queen’s is where Mr. Abdelmahmoud got his start in media. He never grew up dreaming of being a reporter. After a stint as News Director for Queen’s campus radio station CFRC, he discovered he loved putting together the twice-weekly newscast.

A career in media was not on his mind after graduation. He was planning to get a Master’s degree in public policy from the University of Toronto but, to his surprise, he was not accepted.

The rejection was serendipity. Instead of studying policy, he ended up working as a researcher on the CBC TV show George Stroumboulopoulos Tonight. That led to jobs at CBC TV’s The National and The Agenda with Steve Paikin on TVO until the fall of 2015, when he landed his current job as Social Media Editor at BuzzFeed Canada.

Many people might recognize Mr. Abdelmahmoud from his high-profile role as a panelist on The National, where he talked about everything from why Canadians are being asked to pay more taxes to the growing distrust faced by Muslims. The National changed formats, so the panel is gone but, Mr. Abdelmahmoud still regularly appears on other CBC shows and has a monthly column in Chatelaine magazine.

Zhaodi Culbreath, Sc’08, has enjoyed watching his former classmate grow in the media industry and take on challenging topics with grace and openness.

“His CBC Viewpoint on how Muslims are routinely portrayed and vilified in Canadian media was candid and thoughtful. Elamin has an incredibly positive demeanour and brings his passion to the forefront in all his endeavours,” says Mr. Culbreath, the former president to the Toronto Branch of the QUAA. “I have been thoroughly impressed and amazed as I’ve watched him grow and become a sought-after commentator.”

Mr. Abdelmahmoud never studied journalism, but credits his philosophy and gender studies classes at Queen’s, along with his stints at CFRC and the Queen’s Journal, for giving him the ability to connect ideas.