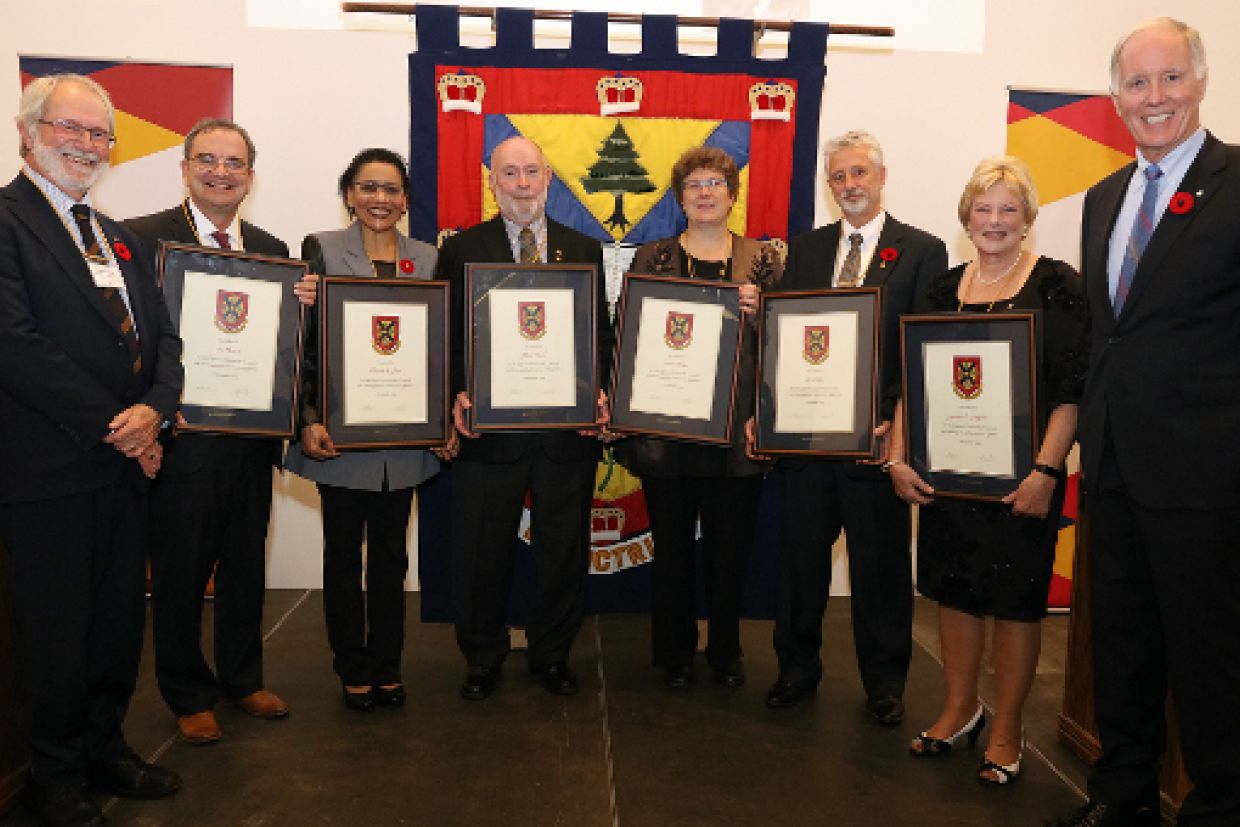 The Distinguished Service Awards for 2019 were presented to six members of the Queen’s community this past weekend at a reception honouring their extraordinary achievements. Awarded each year to staff, faculty, alumni and friends to recognize exceptional contributions to the university, the DSAs were presented by Chancellor Jim Leech and Principal Patrick Deane to Sue Blake, Artsci’75, Yolande Chan, Merv Daub, Com’66, Tom Harris, Sc’75, Janean Sergeant, Arts/PHE’78, Ed’79, and Chris Tabor.

The award recognizes exemplary service to Queen’s over an extended period of time.

The following is an edited version of the citations for each award winner.

Susan Blake has been a mainstay at Queen’s University since graduating with a Bachelor of Science degree in chemistry in 1975, holding various roles in that department before joining the Faculty of Arts and Science in 1999 as Director of Student Services. For close to two decades, Ms. Blake has successfully led work related to recruitment and admission, registration, academic advising, appeals, progression, awards, curriculum, and human resources for the university’s largest faculty. Her knowledge and abilities are legendary, with deans, associate deans, department heads, faculty, and staff relying her calmness, stability, and support. Ms. Blake’s work shepherding the approval of new programs, certificates, and courses has had a tremendous impact, in particular the recent success leading five Indigenous curriculum initiatives in partnership with the local Mohawk community and Indigenous scholars.

Yolande Chan has demonstrated remarkable service and unfailing commitment to Queen’s since arriving on campus almost 30 years ago. During that time, Dr. Chan has demonstrated her generosity through service in more than 35 major roles for Smith School of Business, Queen’s, and beyond, including the Council of Ontario Universities and the Social Sciences and Humanities Research Council.  Her service has also had a personal impact through her mentoring of women and racialized faculty, students, and staff. One of Dr. Chan’s greatest contributions to Queen’s was her role as co-chair of the Principal’s Implementation Committee on Racism, Diversity, and Inclusion.  In four months, while carrying a full workload, she co-led up to four committee meetings a week as well as town halls and small group meetings. Dr. Chan demonstrated incredible empathy and thoughtfulness, and delivered a report with recommendations that have changed, and will continue to change, the core of this institution, ensuring it is a place anyone and everyone can call home.

The roles Merv Daub has held during his time at Queen’s span a diverse number of fields. He has been a student, an athlete, a faculty member, a trustee and university councillor, an author, a coach, a construction committee chair, and more. Through them all, Mr. Daub exemplified what the Distinguished Service Award is all about: recognizing individuals who have made the university a better place through their extraordinary contributions. His many nominators noted that he consistently went above and beyond in his roles and that his work has left a legacy at the university. Mr. Daub has achieved this while finding a delicate balance between being a strong leader and selfless follower. Mr. Daub’s gentle guidance and wisdom have served as an example for many, from his time as captain of the Queen’s football team, to his professorship in Smith School of Business, membership on the university’s Board of Trustees and chair of its Audit Committee, and leadership of the committee dedicated to building Goodes Hall.

It is difficult to summarize Tom Harris’ impact on the university. From student, to faculty member, department head to dean, Vice-Principal to Provost, it has been a remarkable ride since he first arrived at Queen’s in 1971. His hard work, dedication, and leadership of Queen’s Initiative Campaign will benefit the university community far into the future. Contributions totalled $640 million, surpassing the goal of $500 million. These funds were directed to a myriad of causes, including student financial assistance, the endowment, research, and building construction. Dr. Harris has also left his mark on thousands of students, staff, and fellow faculty. Many have described him as a mentor, someone who is always willing to lend an ear and provide sage advice. Others liken him to an advocate or a coach, an individual who expresses complete belief and confidence in others and their ability to succeed, often in trying times. He has made it clear that his sincere commitment to the student experience at this university is most often his primary motivation. Dr. Harris’ time as a faculty member garnered him teaching awards, his time as dean cemented his dedication to the Faculty of Engineering and Applied Science, and his current tenure as Provost and Vice-Principal (Academic) has given him the chance to demonstrate his commitment to students in all disciplines.

A dynamic leader, Janean Sergeant made an immediate impression on Queen’s when she arrived on campus as a Physical Education student in 1974. In three of her five years playing hockey, the women’s team was triumphant as provincial champions. A true multi-season athlete, Ms. Sergeant was also part of Queen’s provincial champion field hockey team and received the Award of Merit as Queen’s top female athlete. In a stroke of luck for the university, she chose to stay at Queen’s, coaching, coordinating recreation and intramural programs, managing administrative services and the fitness centre, and leading high-performance sport operations, a role she held until retirement. Ms. Sergeant has also made significant contributions to provincial and national interuniversity sport.  She has served on various boards of directors and committees as varied as sport tech and sport equity and equality, helping to shape influential decisions on university sport and worked as a Sport Technical Manager at the International University Sports Federation Summer Games in China in 2011.

As manager of the Queen’s Campus Bookstore, Chris Tabor acted as an advocate on behalf of an entire campus of students, trained and mentored hundreds of engineering students in business and governance, spearheaded the creation of national organizations, and initiated software now used by over 75 post-secondary institutions across North America. Throughout his career, Mr. Tabor has continually gone above and beyond what is expected of someone in the role. He has, quietly and without fanfare, had a significant impact on the living and learning environment at Queen’s University and beyond. Mr. Tabor developed systems that brought the price of textbooks down to a level unseen in North America and pioneered the use of various referral fees and encouraged students to buy the least expensive materials they could find, regardless of the source. He organized and represented campuses across the country in publishers meetings where he campaigned for lower prices.

Questions about the Distinguished Service Awards can be directed to the University Secretariat by email or 613-533-6095.