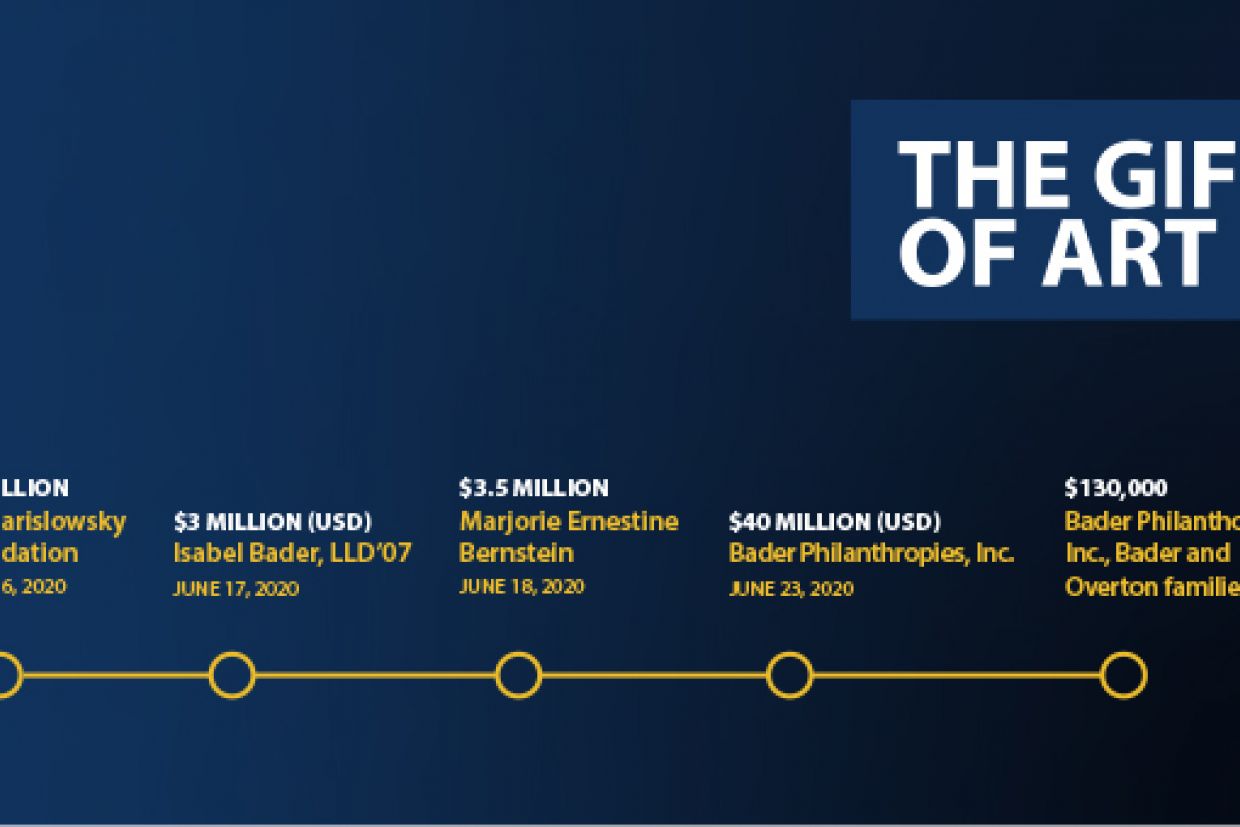 The Gift of Art

It has been a transformative two weeks as the university announced more than $60 million in philanthropic investments in the arts, including a cash gift that is the largest in Queen’s history.

The investments will help Queen’s researchers and students play a fundamental role in enabling societies to better understand, protect, and experience the world’s artistic and cultural treasures.

Here is a review of these exciting announcements.

The gift, the largest cash donation in Queen’s history, will revitalize and expand the Agnes Etherington Art Centre and has the potential to create one of the largest university art museums in Canada. A new facility will enhance Queen’s ability to care for and showcase the Agnes’s magnificent art collections, including the 200-plus paintings in The Bader Collection and the Collection of Canadian Dress.

The gift will allow the Isabel Bader Centre for the Performing Arts to host more world-class performers and emerging artists from diverse cultures and backgrounds and help contribute to a more inclusive society. The donation was made in honour of Ms. Bernstein’s late daughter, Jennifer Velva Bernstein, Artsci’89, who loved the arts and was passionate about social causes.

The gift will establish the Bader Chair in Art Conservation and allow students and researchers to become world leaders in imaging science, an emerging field that is revolutionizing art conservation. It will help the next generation of art conservators better preserve our history and heritage.

June 16: $1 million from The Jarislowsky Foundation

The gift brings leading-edge art conversation equipment to Queen’s so students and researchers can better understand the materials and techniques used to create artworks, which leads to better ways to preserve paintings and other cultural artefacts.

The announcements coincide with the Bader and Overton Canadian Cello Competition, which is taking place June 24-27 and streaming live across the country on CBC Music. The event will give national exposure to young cellists and help launch their careers. The competition is made possible thanks to support of $130,000 from Bader Philanthropies, Inc. and the Bader and Overton families.

“The arts ignite our creative pursuits and speak to the very core of our humanity,” Principal and Vice-Chancellor Patrick Deane said earlier this week after the $40-million (USD) Agnes Etherington revitalization announcement. “Even during these trying and challenging times, we have seen how the arts have provided solace and optimism bringing us together to understand our shared history and culture. The power of art cannot be underestimated, and today’s announcement is an exciting step towards making Queen’s one of the world’s foremost leaders in arts education.”

Several other gifts in recent years have also had a significant impact on the arts at Queen’s.

In 2018, Queen’s was the recipient of a generous gift in excess of $5 million from the estate of Alexander Jeffery, BCom’60. Mr. Jeffery was a longtime supporter of the arts and his gift benefits both the Isabel Bader Centre for the Performing Arts and the Dan School of Drama and Music by supporting artistic programming for students, patrons, and audiences, as well as other education and operating activities. In 2016, the Aubrey and Marla Dan Foundation made a $5-million investment in the arts at Queen’s. The Dan’s vision and generosity has allowed the Dan School of Drama and Music to become the pre-eminent school for performing arts and music education in Canada.