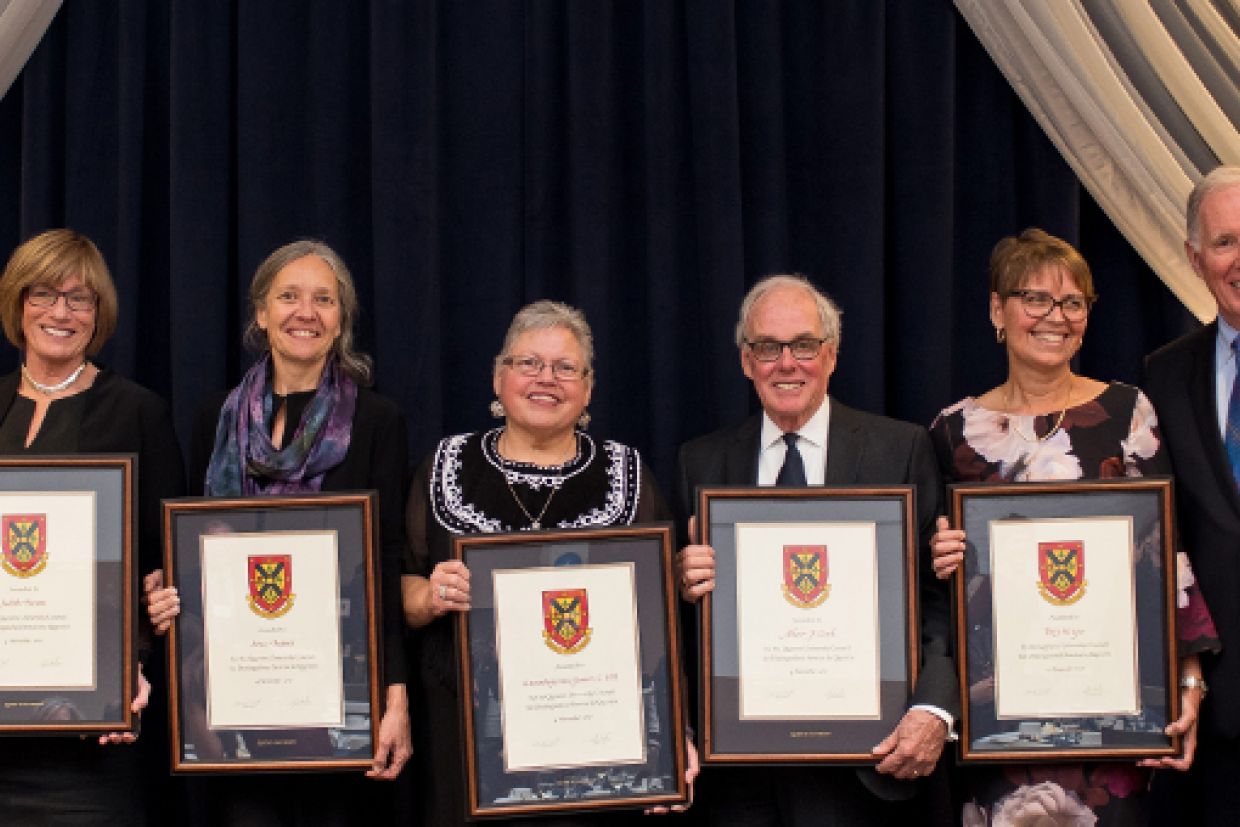 Six dedicated members of the Queen’s community are being honoured by University Council with the Distinguished Service Award.

University Council has presented the award annually since 1974 to recognize individuals who have made Queen’s a better place.

“These six people have done tremendous work for the Queen’s community. I look forward to helping honour them and celebrating their achievements. They deserve recognition for their years of dedicated service,” says Chancellor Jim Leech, MBA’73, who will present the awards during the University Council Dinner on Nov. 4 at the Ban Righ Dining Hall.

This year’s recipients have a long list of contributions to the Queen’s community.

Judith Brown is the former Associate Vice-Principal (Advancement) and Executive Director of Alumni Relations and Annual Giving before retiring in the spring of 2017. She worked closely with two of the university’s most beloved alumni and benefactors, Alfred (Sc’45, Arts’46, Msc’47, LLD’86) and Isabel Bader, LLD’07. She worked closely with the Baders as they made several transformational gifts to Queen’s, including the Isabel Bader Centre For the Performing Arts and many works of art to the Agnes Etherington Art Centre – including three Rembrandts. She played a pivotal role in establishing the university’s reputation as a careful steward of its donors and their philanthropic gifts.

Irène Bujara has worked at Queen’s since 1992 and is currently the University Advisory on Equity and Human Rights. She advises the university on its obligations under the Human Rights Code as well as other related legislation such as the Employment Equity Act. She has earned the praise of her staff and colleagues across Queen’s for providing strong leadership in handing challenging issues such as racial discrimination and sexual harassment.

Albert Clark is a former Associate Dean (Research) in Medicine and Health Sciences, and the founder and current Chair of the Queen’s University Health Sciences and Affiliated Teaching Hospitals Research Ethics Board (1991 to present). The biochemist was instrumental is helping Queen’s become a leader in human participant research by setting standards and guidelines to ensure studies are conducted ethically and safely.

Janice Hill was recently named Queen’s inaugural Director of Indigenous Initiatives after serving as the Director of Four Directions Aboriginal Student Centre for the past seven years. Since 2005, she has been diligent advocate for Indigenous students at Queen’s and in the Kingston community. She has spent countless hours on committees and working with staff and administrators to develop a welcoming and supportive environment for Indigenous students at Queen’s.

Terry Krupa is the current Associate Director, Research and Post-Professional Programs in the School of Rehabilitation Therapy and has worked hard to help establish Queen’s as a leader in mental health research. She is a much sought-after speaker at mental health conferences around the world and she regularly collaborates with researchers on local, national and global levels. She was awarded the Muriel Driver Lectureship, the highest honour bestowed by the Canadian Association of Occupational Therapists. Colleagues say Dr. Krupa is a dedicated teacher who has made a lasting impression on generations of Queen’s Occupational Therapy and Rehabilitation Science students.

Hok-Lin Leung is a Professor Emeritus and director of the China Projects Office, and founder of the Asia-Pacific Ambassadors’ Forum which is focused on sharing perspectives from the academic community on ideas related to human rights, immigration, and international agencies. Since joining Queen’s in 1979, he has done tremendous work to strengthen the ties between the university and China. He is always promoting Queen’s to Chinese researchers, government officials and potential students.

Tickets to the University Council Dinner are now on sale and can be purchased through the Queen’s alumni website.