The Queen's Endowment is an investment pool composed of funds that have been designated to university Endowment accounts. Donations received by the university are invested in the Queen's Endowment and each year certain amounts are withdrawn according to the Spending Policy. These annual withdrawals fund scholarships, academic chairs, book funds, lectureships, as well as a diverse range of university programs.

Subject to levels of risks acceptable under a "prudent portfolio" approach to investing funds of this nature, the primary objective of the Pooled Endowment Fund is to maximize risk adjusted returns in furtherance of two competing goals; the goal of releasing substantial income to support current operations and the goal of preserving the purchasing power of assets for future generations.

Tell us your story! We want to know what makes giving so important to you.

How do I make a gift to Queen’s?

*Managers of legacy investments less than 0.5% of the Queen's Endowment's market value are not shown.

The Queen's Endowment is well diversified across individual securities, asset classes, and geographies. The table below outlines the Strategic Policy Asset Mix for the fund.

See a full report of the assets held within the Queen's Endowment. 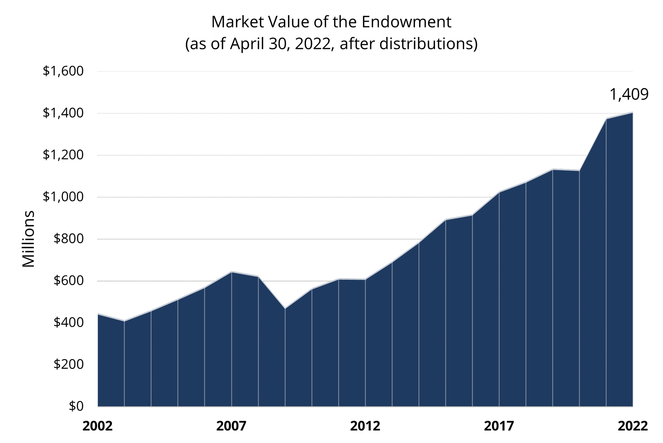 The Investment Committee is responsible for establishing the spending policy for the Queen's Endowment, which is detailed in Section 5.7 of the fund's Statement of Investment Policies and Procedures:

The current policy has been approved by the Board of Trustees. The objective of the spending policy is to release substantial income while preserving the purchasing power of the assets for future generations.

The spending rule for Queen's attempts to achieve these objectives by using a long-term spending rate of 4.0% per annum combined with a smoothing rule that adjusts spending gradually to changes in endowment market value. The amount released under the spending rule is based on a 70% weight applied to the previous year's spending adjusted for inflation and a 30% weight applied to the amount that would have been spent using 4.0% per annum of current endowment market value. The spending formula includes a spending cap at 4.5% and a spending floor at 3.5%.

As a consequence of the smoothing rule, the spending payout has a lower volatility than that of the overall fund.

The Spending Policy will be reviewed annually by the Investment Committee.

The spending formula has two implications. First, by incorporating the previous year's spending, the rule eliminates large fluctuations and so enables the university to plan for its operating budget needs. Second, by adjusting spending toward a long-term rate of 4.0% of endowment market values, the rule ensures that spending levels will be sensitive to fluctuating endowment market value levels, providing stability in long-term purchasing power.

The endowment fund's payout is set annually based on the prior calendar year's ending market value. The payout for the 2022/2023 fiscal year is 15.75 cents per unit, implying a spending rate of 3.6%:

The Queen's Endowment operates in a similar manner to a mutual fund. The value of a unit is determined by dividing the total current market value of the fund by the number of units outstanding. This value is calculated monthly by the Department of Financial Services and will increase or decrease according to investment performance.

Donations received by Queen's are unitized at the end of each month at the prevailing unit value. Income is then credited to the donor-specified cause based on the number of units held and the current dividend rate, as established by the Investment Committee.

The monthly value of a Queen’s Endowment fund unit is shown below.

An amount is withdrawn annually from the Queen's Endowment fund to recover a portion of the internal administrative expenses relating to endowment management. This year, $2,087,000 is being withdrawn for this purpose, which amounts to approximately 0.15% of the Queen's Endowment's total assets. This amount is exclusive of fees related to external investment management. Current combined investment and administrative annual expenses are approximately 0.37% of total assets, plus HST. This figure excludes fees for our private equity investments, the returns for which are reported net of fees.