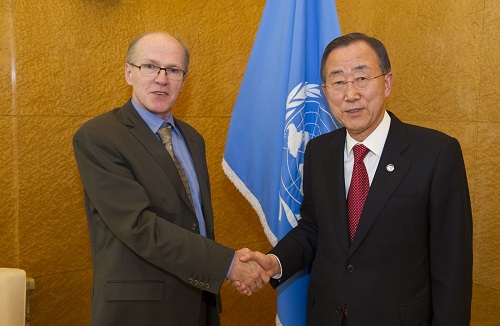 McGarry’s work has had an important public policy dimension and impact.  He has appeared as an expert witness before the International Relations Committee of the U.S. Congress; participated in briefings of the UN Security Council; and worked with several governments around the world. His work on power-sharing and policing reform in Northern Ireland has been seen as influential in the resolution of its conflict. In 2008-09, McGarry worked as the  "Senior Advisor on Power-Sharing" to the United Nations (Standby Team, Mediation Support Unit), the first person appointed to this position. He is currently the lead advisor on power-sharing and governance in the UN-backed negotiations in Cyprus.

McGarry was appointed as a Canada Research Chair in 2002 (renewed in 2009 and 2016).  He was elected a Fellow of the Royal Society of Canada in 2010 and won the Trudeau Fellowship Prize in 2011.  In 2013, he was awarded the Queen Elizabeth II Diamond Jubilee Medal and the Killam Prize (Social Sciences), the first political scientist to win the latter award. In 2014, McGarry was awarded the Innis-Gérin Medal, the Royal Society of Canada's highest honour for a social scientist. In 2015 his research on conflict resolution was recognized by the Council of Ontario Universities (COU) as one of the top 50 examples of "game-changing" research conducted in Ontario during the past 100 years. In 2016, he was the co-winner of the Distinguished Scholar Award from the Ethnicity, Nationalism and Migration Section of the International Studies Association; was awarded the Molson Prize (Social Sciences and Humanities) by the Canada Council for the Arts and Social Sciences and Humanities Research Council, and was appointed an Officer of the Order of Canada.

McGarry has been a regular contributor to public media, in Ireland, the United Kingdom, the United States, and Canada.  He has written op-ed pages for several newspapers, including The Globe and Mail, and has also been interviewed for CBC TV, CBC Radio, CTV, National Public Radio, and TVO.

Born and brought up in Ireland, McGarry now lives in Kingston, Ontario.

For more details on political studies courses, please refer to the Undergraduate and Graduate pages.