*Please note: all POLS graduate courses are held in room B313 in Mackintosh-Corry Hall. To locate the building, please refer to the campus map. To locate the classroom, please see below: 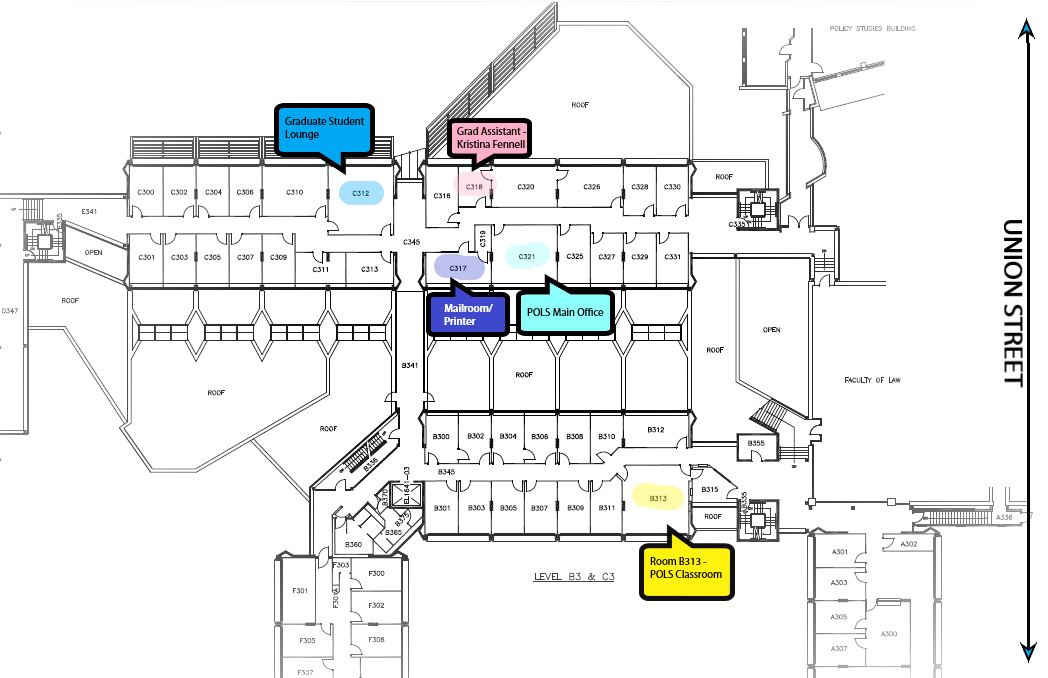 Details about courses that will be offered and their instructors can be found below. Please note that these courses are subject to change.

Field courses (POLS 910, POLS 930, POLS 950, POLS 960, and POLS 980) are the PhD-level equivalents of the MA-level core courses (POLS 810, POLS 830, POLS 850, POLS 860, POLS 880) offered in each field. PhD and MA-level courses are offered jointly in each related field. Doctoral students will be registered under the field course number and Master’s students will be registered under the core course number. Doctoral students will receive a supplementary reading list that will provide additional depth on the topics covered in the core course to help them prepare for their field examinations. In years when a field cannot offer the 800-level core course, the doctoral field course will be offered as a reading course to doctoral students taking it for field exam preparation.

Description: An introduction to the political history of Quebec: the development of ideologies (including nationalism), constitutional developments, and the building of the Quebec state during the Quiet Revolution. Some contemporary issues in Quebec politics, and the relationship between Quebec and the rest of Canada.

Description: An examination of the importance of elections to the maintenance of democratic systems. Six themes are discussed: the history and theory of democratic participation; the legal framework; campaign organization; why people vote the way they do; the manifestation of social cleavages during campaigns; and the future of electoral participation. Canadian examples are placed in a comparative context.

Description: A systematic examination of political systems in order to account for significant similarities and variations among them.  At the core of the field are two issues: what are the major contending approaches to determining what is significant, and what is the nature of the comparative method? This course aims to develop criteria for choosing between approaches and research strategies for empirical work.

POLS 832* - Theories and Politics of Nationalism

Description: This course examines major theoretical debates and influential empirical studies that address the following sets of questions: What do we mean by “nationalism” and “nationhood”? What is “national sovereignty” and what does it have to do with statehood and democracy? What is the “glue” of nationalism: what binds and divides nations? How is nationalism changing in the 21st century?

Description: This course explores theoretical and empirical questions at the intersection of politics and law. The course examines the function of constitutions, how judges on constitutional courts make decisions, and the function of judicial decision making situated more broadly in a democratic society. When do courts matter and for whom?

Description: This course is a graduate level survey of major themes in Indigenous politics through a comparative analysis of selected cases. The goals are to provide a foundation of major themes and methodologies within the field that will allow students to engage in the emerging literature and diversify their methodological portfolio.

Description: This course will explore a variety of theoretical and empirical issues related to the politics of ethnic conflict. The politics of ethnic conflict encompass a wide range of issues that present distinct challenges to states and societies. Themes invested in this course include the construction of ethnic identities, sources of conflict, types of mobilization, state ethnicity relations, changes in territorial and social boundaries, and the complex interaction between ethnicity and democracy.

Description: A critical survey of the main theoretical approaches to development, including modernization theory, neo Marxism, underdeveloped theory and neo liberalism. These are considered in relation to issues of ethnicity and culture, the role of the nation state in development, technology and industrialization and the globalization of the world economy.

Description: The course offers an advanced study of how states around the world respond to ethnic, national and religious diversity. It covers the full range of state responses, from genocide and ethnic expulsions to assimilation, power-sharing and territorial autonomy.

Description: An exploration of issues of justice in international politics from a normative and philosophical perspective. The course will explore the nature of our duties to people in other countries, the basis of the nation state and the limits of its territorial claims, and the justification of global institutions. The course will cover topics such as just war theory, humanitarian intervention. secession, migration, human rights, and global distributive justice.

Description: An examination of the reorientations in contemporary political thought. Topic TBA.

Description: The word "science" comes from the Latin scientia which means "having knowledge".  What is the relation between science and normative political ideals like democracy, justice and equality?  The topics covered in any given year will vary, but may include the ethical, legal and social consequences of advances in the biomedical or environmental sciences.

Description: This course is a comprehensive examination of the evolution and current state of the field of International Relations (IR). It covers international theory, the structure of the international system, key concepts, readings from the canon, and themes in the study of IR such as war, security, foreign policy, the state, gender, global systems, and concepts of power. This course also locates IR in relation to Global Political Economy (GPE) and other related fields of study.

Description: The course examines major trends in American foreign policy covering domestic as well as external variables in pre and post war administrations. Emphasis is placed on the USA's global role, the part it plays in international organizations and alliance systems, and the conflicts and controversies that characterize them.

Description: This course is about the role of race and racism in international politics. The goal of the course is to provide a foundation into critical race approaches to understand IR’s disciplinary origins, its theories, and how they help shape the world order. The course integrates various concepts, theories, and issues from different subfield to bring back the concept of “the color line” into our conversations about global politics.

Description: An exploration of the theory and practice of global governance which traces the emergence of the concept in modern international relations; the academic and public policy debates to which it has given rise; and its application in the design and work of selected international institutions.

This course addresses the diverse and developing field of Gender and Politics in the discipline of Political Science. The focus will vary depending on the instructor, addressing topics such as: representation; feminist methodology; identity; gender and work; gender and citizenship; the politics of the family; queer theory; intersectionality of race, gender and class; and gender and globalization.

Graduate students are permitted to take one external course that is not offered in the Political Studies department. Below are links to external departments that may be of interest. Enrollment in external courses is subject to availability. All course selections should be discussed with the Graduate Coordinator.

The non-credit Course of Research Ethics (CORE) is mandatory for all incoming graduate students who will engage in research involving human subjects. It is a web-based tutorial providing familiarity with and practical application of Canada's national standard of ethics for research as outlined in the Tri-Council Policy Statement. For more information and to access the course, please go to the Government of Canada's website

For detailed descriptions of the Political and Legal Thought courses, please refer to each link organized by department:

The material on this website is copyrighted and is for the sole use of students registered in the following courses. The material may be downloaded for a registered student's personal use, but shall not be distributed or disseminated to anyone other than students registered in the following courses. Failure to abide by these conditions is a breach of copyright, and may also constitute a breach of academic integrity under the University Senate's Academic Integrity Policy Statement.