Kingston Police are continuing the investigation of an incident where an officer was injured during St Patrick’s Day events. The incident occurred on March 19th, 2022 at 2:18 p.m. on Aberdeen Street.

Seconds prior to being assaulted with a beverage container, the victim officer was attempting to arrest a male party. This male pulled away and fled, causing the officer to fall to the pavement. The male was quickly apprehended and arrested by other officers. However, at the time of the initial struggle, officers were unaware a magazine with ammunition was dislodged and landed on the pavement.  Investigators reviewing the video observed the magazine was immediately picked up by a female party-goer.

This female is described as having blonde hair, a white jacket, green shirt with 41 on the front and a white skirt. This female joined three other people, and they are last seen walking west on Johnson Street.

Please view the photos below, and contact Sergeant Jim VELTMAN at 613-549-4660 x 6300 or email, if you have any information regarding the officer being assaulted or the parties involved in taking the magazine with ammunition. 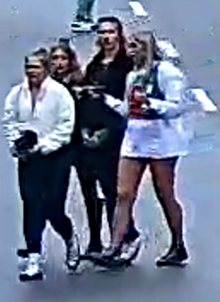 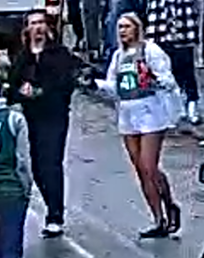