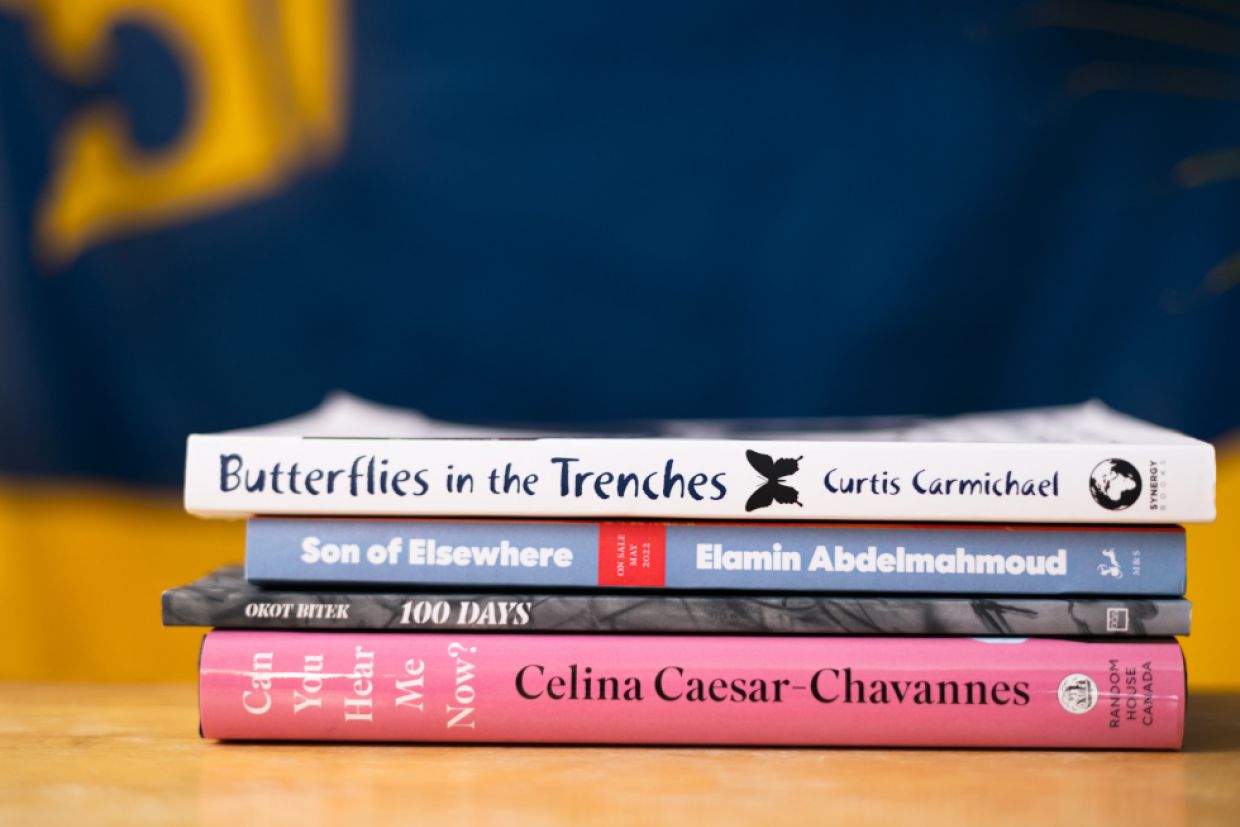 Four books by Black alumni, staff that reflect on identity, belonging, and humanity

To celebrate Black History Month, we are featuring four must-read books from Queen’s alumni and staff that explore themes of identity, belonging, resilience, and humanity.

In their books, alumni Elamin Abdelmahmoud, Artsci’11, and Curtis Carmichael, Artsci/PHE'16, and adjunct lecturer Celina Caesar-Chavannes, Queen’s Senior Advisor of Equity, Diversity, Inclusion Initiatives and share powerful accounts of how their Black identities shaped their experiences and contributed to their successes – personally and professionally.

In her book of poems, Dr. Juliane Okot Bitek, assistant professor in the Department of English at Queen’s, reflects on the meaning of memory two decades after the 1994 Rwanda genocide.

Read more about these inspiring and important works and the authors behind them. This is by no means an exhaustive list. Discover more works by Black authors at Queen’s, including by seven new faculty members to the Faculty of Arts and Science’s Black Studies Program.

Son of Elsewhere: A Memoir in Pieces by Elamin Abdelmahmoud, Artsci’11

In Son of Elsewhere: A Memoir in Pieces, gender studies graduate Elamin Abdelmahmoud recounts his childhood growing up in Kingston after immigrating from Sudan with his family at age 12. This collection of essays sees Abdelmahmoud discuss how life in Kingston – and in Canada – meant learning to balance a new racial identity and the false assumptions that came with it. Abdelmahmoud also discusses how being Muslim shaped his experiences in the aftermath of the Sept. 11, 2001, attacks on the World Trade Center in New York.

“The pivot points are about identity,” Abdelmahmoud says, who is now a culture writer for Buzzfeed News and CBC podcast host. “When I moved to Kingston, I felt the need to evaporate a lot of aspects of my identity in order to blend in. Slowly, over time, that unravelled. Slowly, over time, I realized that it’s not a healthy way to live, to suppress parts of my identity. The book is about revisiting those identities and making peace with them. There is a whole thought process behind inviting yourself to suppress those things and then deciding not to do that anymore.”

Son of Elsewhere: A Memoir in Pieces is set to be released on May 17 and is now available for pre-order. You can also read more about it in the spring issue of the Queen’s Alumni Review.

Can You Hear Me Now? by Celina Caesar-Chavannes

Celina Caesar-Chavannes became the first Black person elected to represent the federal riding of Whitby, Ont., because she wanted to make a bigger difference in the world.

Before entering politics, Caesar-Chavannes was a successful entrepreneur, launching and growing an award-winning research management consulting firm with a focus on neurological conditions.

She was elected to the House of Commons in 2015, where she served as a Liberal member of Parliament and parliamentary secretary to the prime minister and minister of International Development et la Francophonie. In 2019, she chose not to seek re-election and, in March of that year, announced she would sit as an independent until the end of her term. While in office, Caesar-Chavannes advocated for people living with mental illness, as well as equity and justice. She has won numerous awards for her work, including being named one of the Most Influential People of African Descent, Global 100 Under 40, Politics & Governance and Black Parliamentarian of the Year in 2017, and was featured in the April 2018 edition of O, The Oprah Magazine. In 2019, she was named Chatelaine’s Woman of the Year.

She is now the senior advisor of Equity, Diversity, Inclusion Initiatives at Queen's, an adjunct lecturer, and student within the Department of Neuroscience.

In Can You Hear Me Now? How I Found My Voice and Learned to Live with Passion and Purpose, Caesar-Chavannes explores her childhood and her life as a young Black woman, entrepreneur, and politician and reflects on how her mistakes and vulnerabilities – as well as her strengths – made her a better leader. She encourages readers to use their identity and authenticity to make a difference. As she writes: “This is not your typical leadership book where the person is placed in a situation and miraculously comes up with the right response for the wicked problem. This is the story of me falling in love, at last, with who I am, and finding my voice in the unlikeliest of places.”

Read more about Caesar-Chavannes and Can You Hear Me Now? on her website. And read a Q&A with her in the spring 2021 issue of the Queen’s Alumni Review.

Butterflies in the Trenches by Curtis Carmichael, Artsci/PHE’16

Curtis Carmichael’s life and mission to break the cycle of poverty for today’s youth inspired Butterflies in the Trenches, the world’s first augmented reality memoir. Butterflies in the Trenches is the candid story of Carmichael’s early life in public housing projects in Scarborough, Ont. He shares raw and intimate stories from his childhood as a drug dealer and hustler and explores the effects of poverty, systemic racism, and police brutality on Black and low-income communities. He wrote the book to inspire children and teens to become self-sufficient, support their communities, and break the cycle of poverty.

Carmichael’s determination earned him a scholarship at Queen’s where he was best known as a star wide receiver and winner of 2016 Russ Jackson Award as the U SPORTS “player who best exemplified the attributes of academic achievement, football skill, and citizenship.” Today, Carmichael is an award-winning social entrepreneur, STEM educator, keynote speaker, technologist, cross-Canada cyclist, and advocate for racial justice. He is also the founder of Ride for Promise, a film and conversation about Carmichael’s cycling journey across the country to challenge Canadians on their perceptions of racialized youth growing up in marginalized communities.

In addition to the book, Carmichael brings Butterflies in the Trenches to life with more than 100 photographs featured in an augmented reality mobile app, podcasts, and videos.

In December, Carmichael joined the QUAA Alumni Volunteer Series to talk about his book. Find a recording of that talk on the Queen’s Alumni website.

Learn more about Carmichael's memoir and his advocacy work and read an interview with him in the fall 2021 issue of the Queen’s Alumni Review.

To mark two decades since the Rwandan genocide, poet, scholar, and assistant professor in the Department of English Dr. Juliane Okot Bitek wrote a poem a day for 100 days ― each poem recalling the senseless loss of life and innocence of the estimated 800,000 Tutsi and Hutu people that were killed.

In 100 Days, Okot Bitek draws on her own family's experience of displacement under the regime of Idi Amin in Uganda, pulling in fragments of the poetic traditions she encounters along the way: the Ugandan Acholi oral tradition of her father ― the poet Okot p'Bitek; Anglican hymns; the rhythms and sounds of the African American Spiritual tradition; and the beat of spoken word and hip-hop.

“(100 Days) applies to all kinds of landscapes and times, including here and now,” says Okot Bitek. “How a reader interprets it is not about how meaningful it is to me, but to them.”

Learn more about Dr. Juliane Okot Bitek on her website. 100 Days can be purchased from the University of Alberta Press or at a local bookstore.

To recognize Black History Month, events are planned across Queen’s for the month of February, including Black fashion events, art exhibitions, educational panels and anti-racism sessions, Black queerness and selfcare workshops, as well as dance and music expos. Check the full schedule on the Human Rights and Equity Office website.