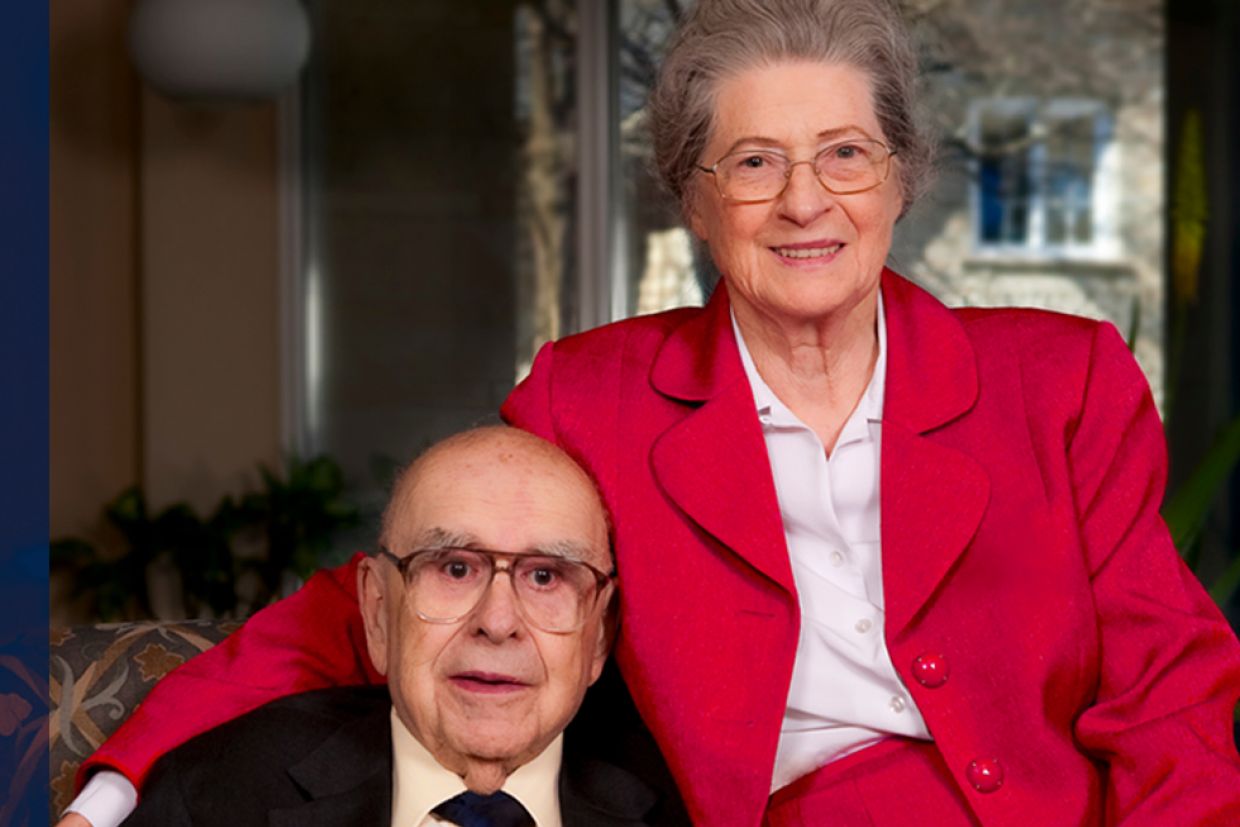 Generations of generosity: The Bader family tradition of philanthropy

In the fall of 1941, just 30 days after Queen’s celebrated its centennial anniversary, a new student set foot on campus for the first time. It was the beginning of a relationship that is now entering its ninth decade.

When Alfred Bader, arrived on campus on Nov. 15, 1941, no one could have imagined that he would go on to become the university’s most prolific benefactor.

In fact, Bader was anything but a typical Queen’s student. On his own after losing family in the Holocaust, the Vienna native was less than a year removed from a bat-infested internment camp in Fort Lennox, Quebec, reserved for “enemy aliens,” the result of a misunderstanding that turned a 16-year-old refugee into a prisoner of war.

Martin Wolff, a German-Jewish journalist and historian living in Montreal, secured Alfred’s release from the camp, welcomed him into his family, and encouraged him to continue his education. When McGill and the University of Toronto turned down Alfred’s applications, he applied to Queen’s and was accepted immediately, despite the fact that the fall term had been underway for two months.

“Many of the professors and Registrar Jean Royce…treated me wonderfully – as an individual, not as POW #156,” he said. "This kindness brought me out of my shell."

Once he was out of his shell, Alfred flourished at Queen’s, making friends and winning awards for his research. He even won a public speaking scholarship for his performance with the Debating Society, which he joined as a joke, thinking his thick European accent would make him an ineffective debater.

Alfred would spend six years on campus in total, earning bachelor’s degrees in chemistry and history, and a Master’s in chemistry.

From Queen’s, Alfred moved on to Harvard to earn a doctorate in chemistry, and then to Milwaukee, where he worked as a research chemist at the Pittsburgh Plate Glass Co.

While at Pittsburgh Plate Glass, he realized that there was room in the market for a small company that could supply research chemicals to other small companies. “He recognized a worldwide market for these fine chemicals that appear on everyone’s lab bench,” says Tom Harris, Sc’75, a former Queen’s provost and Vice-Principal (Advancement) and a longtime research chemist himself. “So much research was made possible because of his company. He created products and services so enabling that it would be hard to imagine advances in basic sciences and pharmaceuticals without them.”

Alfred’s company, now known as Millipore Sigma, would become one of the U.S.’s 100 largest chemical companies. He served as its president, its chair, and, upon his retirement in 1991, as chair emeritus. A year later, he was voted out of the company in a dispute with its board of directors. While he described the incident as “a staggering blow,” he added that it gave him the freedom to focus on two of his greatest passions, art and philanthropy.

Alfred began collecting art at age 10. He purchased his first painting, a portrait of himself, at 16, while living in the internment camp. He would eventually graduate to European art of the 14th through 19th centuries, becoming one of the world’s pre-eminent private collectors of paintings from the Dutch Golden Age, with a special focus on Rembrandt van Rijn.

His philanthropy started almost as early as his art collecting. In 1948, just a year after he left Queen’s, Alfred’s sponsor and friend, Martin Wolff, died, leaving him the then-princely sum of $1,000. Grateful for the difference Wolff made in his life, Alfred decided to pay the favour forward and made his first gift to Queen’s, establishing the Martin Wolff Scholarships in Civil Engineering.

That gift launched a philanthropic legacy that has grown to 19 scholarships, bursaries, fellowships, and awards, benefiting 1,029 students over the years.

In 1967, Alfred’s philanthropy to Queen’s evolved when Frances Smith, the curator of the Agnes Etherington Art Centre, asked him to donate one of his paintings to the university’s art museum. He obliged by donating an early 16th-century painting that had previously belonged to his grandfather. Since then, Alfred’s relationship with the Agnes grew, and with a vision of making these significant paintings available to students and scholars on Queen’s campus and around the world, he entrusted the museum with a significant portion of his collection.

Today The Bader Collection is Canada’s most comprehensive collection of authenticated paintings by Rembrandt and his circle. Alfred included three original Rembrandts in the donation to the Agnes, culminating in his 2015 gift of Portrait of a Man with Arms Akimbo.

Isabel Overton Bader, LLD'07:  An inspiration and a philanthropist in her own right

On July 9, 1949, Alfred returned to Europe, booking passage on the SS Franconia, which set sail from Quebec City to Liverpool. On the fifth day of the seven-day voyage, he met Isabel Overton, a northern Ontario native who was celebrating her recent graduation from Victoria University in Toronto by traveling to England to explore her family’s roots. Nine days after they met, Alfred proposed marriage.

Although Isabel turned down the proposal, the pair spent time together in England and exchanged almost 80 letters over two years. Their relationship ended over religious differences in 1951, and Isabel relocated to East Sussex, England to launch her teaching career.

Alfred remained in Milwaukee, married, and raised two sons. Yet he couldn’t forget Isabel. He reunited with her in England in 1975 for what Isabel insisted would be a one-time visit. Two years later, they rekindled their correspondence, and by 1982, they were married.

While Alfred continued to support his alma mater through student financial aid initiatives, research chairs, and gifts of art, it wouldn’t be long before his relationship with Isabel inspired new directions in his philanthropy.

In 1993, while returning to East Sussex with Isabel, Alfred purchased Herstmonceux Castle, a 15th-century castle on a 500-hectare estate, and donated it to Queen’s, perceiving its unique potential to attract and educate students from around the world. Today the castle is home to the Bader International Study Centre, the university’s U.K. campus, and the home of a highly experiential overseas study opportunity.

In 2014, in celebration of Isabel’s passion for music and drama, he contributed the lead gift to create a state-of-the-art multi-disciplinary performing arts centre on the Kingston waterfront, which is now known as the Isabel Bader Centre for the Performing Arts.

Isabel was Alfred’s constant companion on his visits to Queen’s. She would tour the campus with him and operate the overhead projector during his lectures. After Alfred’s death in December of 2018, she deepened her personal relationship with the university, partnering with Queen’s to create impact on the educational research, student and broader communities.

Over the last three years, the soon-to-be-95-year-old Isabel has been busy perpetuating Alfred’s philanthropic legacy and carving out her own. Last year she endowed North America’s second – and Canada’s only - academic chair in art conservation at Queen’s, creating an important opportunity to advance scholarship in this growing field, and educate the next generation of art conservators, who will study and treat cultural, historic and artistic objects in Canada and around the globe.

Understanding the importance of both nurturing emerging Canadian musical talent and supporting the growth and development of young children through connections to music, she has championed important initiatives at Queen’s which accomplish these goals, including Canada-wide violin and cello competitions organized by the Isabel.

Most recently, Isabel has advocated for and partnered with Queen’s to support the vital process of reconciliation, facilitating gifts to create the Indigenous Outdoor Gathering Space behind Mac Corry Hall and an endowed curatorship in Indigenous arts and culture.

Alfred shared his love of art with his sons, David and Daniel. In 2001, Alfred gave Daniel one of his favourite paintings, Rembrandt’s Head of an Old Man with Curly Hair, which, until then, had hung in his living room.

In 2019, Daniel and his wife, Linda, donated the painting to the Agnes. “Not only is the work an exquisite rendering of old age and light that complements the three Rembrandt paintings in The Bader Collection, but its presentation to the Agnes honours Alfred’s memory in a tremendously appropriate manner,” said Dr. Jacquelyn N. Coutré, Bader Curator and Researcher of European Art at Agnes at the time of the gift.

As president of Bader Philanthropies, Inc., the family’s Milwaukee-based charitable foundation, Daniel has overseen several donations to the university over the last few years, including the largest monetary donation in Queen’s history, a $40-million USD ($54-million CAD) gift in support of Agnes Reimagined, the campaign to revitalize the Agnes and redefine the 21st-century art museum as a dynamic culture-making hub that mobilizes the power of art to create a more equitable, inclusive, and sustainable world.