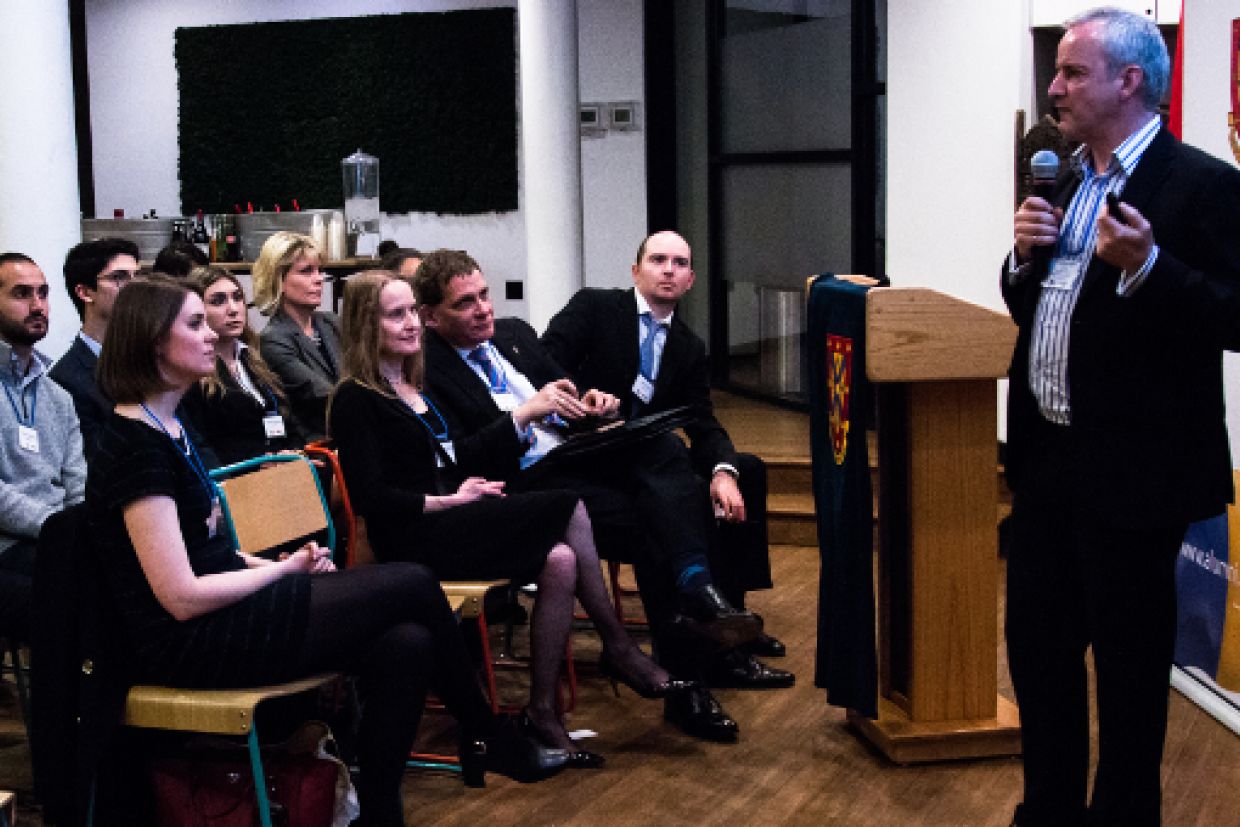 Greg Bavington, Sc’85, speaks to alumni in New York City in 2017 about innovation. 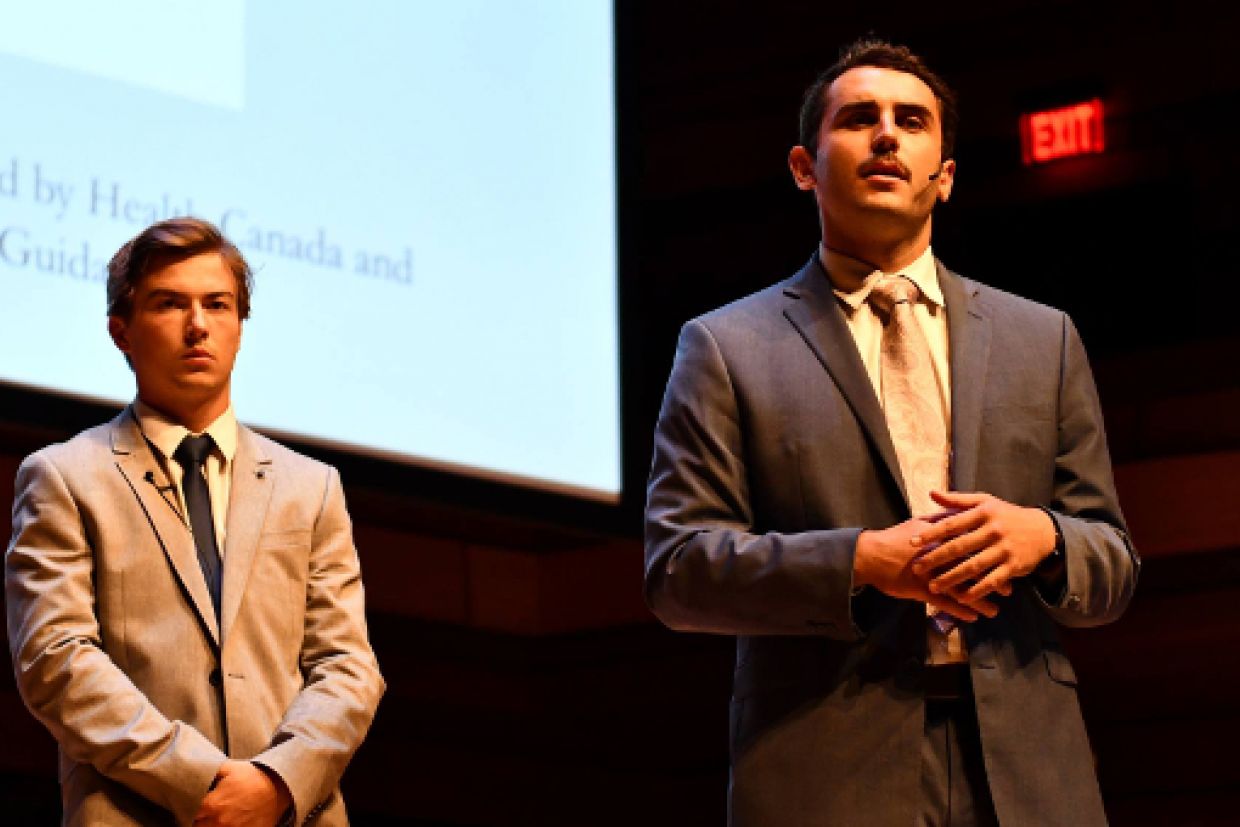 Student entrepreneurs taking part in the DDQIC Regional Pitch Competition in August are being mentored by global network volunteers. 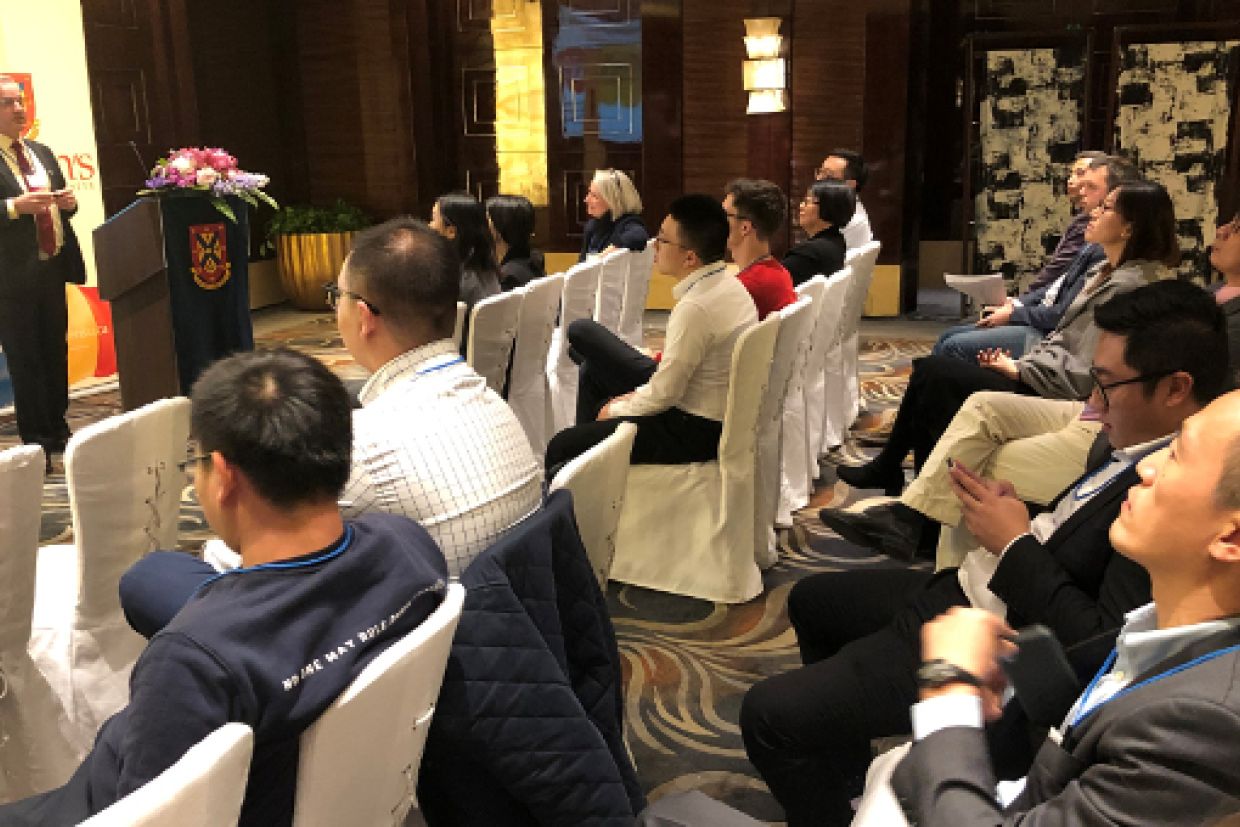 Greg Bavington, Sc’85, speaks to alumni at the launch of the Beijing innovation hub in 2018.

International alumni are stepping up to help turn student entrepreneurs into startup CEOs.

Close to 70 alumni in seven cities around the world have volunteered with the Dunin-Deshpande Queen’s Innovation Centre (DDQIC) Global Network, an initiative that leverages the existing alumni network to create innovation hubs in major centres of commerce such as London, Shanghai, and New York City.

The main duty for about 10 of those business-savvy alumni in August will be working with teams from the Queen’s Innovation Centre Summer Initiative, a 17-week paid summer internship for students to develop their entrepreneurial ideas into concrete business plans. The program culminates at the DDQIC’s Regional Pitch Competition which offers up to $30,000 in seed funding. During the first week of August, global network volunteers will ask tough questions and give expert advice to help young entrepreneurs perfect their plans and startup pitches before the competition’s Aug. 22 final.

The global network is also available to help young entrepreneurs who are ready to take on the enormous challenge of entering a foreign market. Alumni can provide valuable support, such as connecting entrepreneurs with local business people in a new city or navigating cultural nuances.

Pitch competition judge Anton Toutov, Artsci’11, is the head of the DDQIC’s Los Angeles innovation hub and knows firsthand the importance of mentorship. He founded his own chemistry and biotechnology company, Fuzionaire, while completing his PhD at the California Institute of Technology. He received valuable guidance from mentors on everything from filing patents to how to set up the corporate structure of his company.

“Queen’s has an amazing alumni network so students should take any opportunity to tap into it,” says Dr. Toutov. “Entrepreneurship is throwing yourself into a situation of extraordinary uncertainty, and you try to figure out how the world works. So it is enormously valuable to have people who can open a few doors and help avoid landmines.”

The DDQIC launched its first innovation hub (also known as a node) in London, England, in 2016. Since then, the network has expanded to New York City, Los Angeles, San Francisco, Shanghai, Hong Kong, and Beijing.

Heather Christie, Artsci’09, volunteers with the London innovation hub because it allows her to stay connected to the university and help the next generation of Queen’s students. She says a good team and proper support are essential for business success, and she feels alumni have the expertise to bring a student’s product idea to fruition.

“One individual can’t bring a great idea to the world,” says Ms. Christie, a director with the asset management firm BlackRock. “It takes a huge network of people helping, supporting, and providing advice. The more (mentorship and guidance) Queen’s alumni and the DDQIC can provide to student entrepreneurs, the better.”

Mr. Bavington often tells new entrepreneurs that unless their company is making hockey pucks and lacrosse balls, it’s important to think about expanding internationally early on.

“Canada is a small market,” says Mr. Bavington. “Expanding into global markets is crucial but quite daunting for someone who has little experience running a startup. Having international alumni available to consult with about foreign competition and government regulations makes exporting to another country a little less stressful.”

Visit the DDQIC website for details about becoming a global network volunteer.