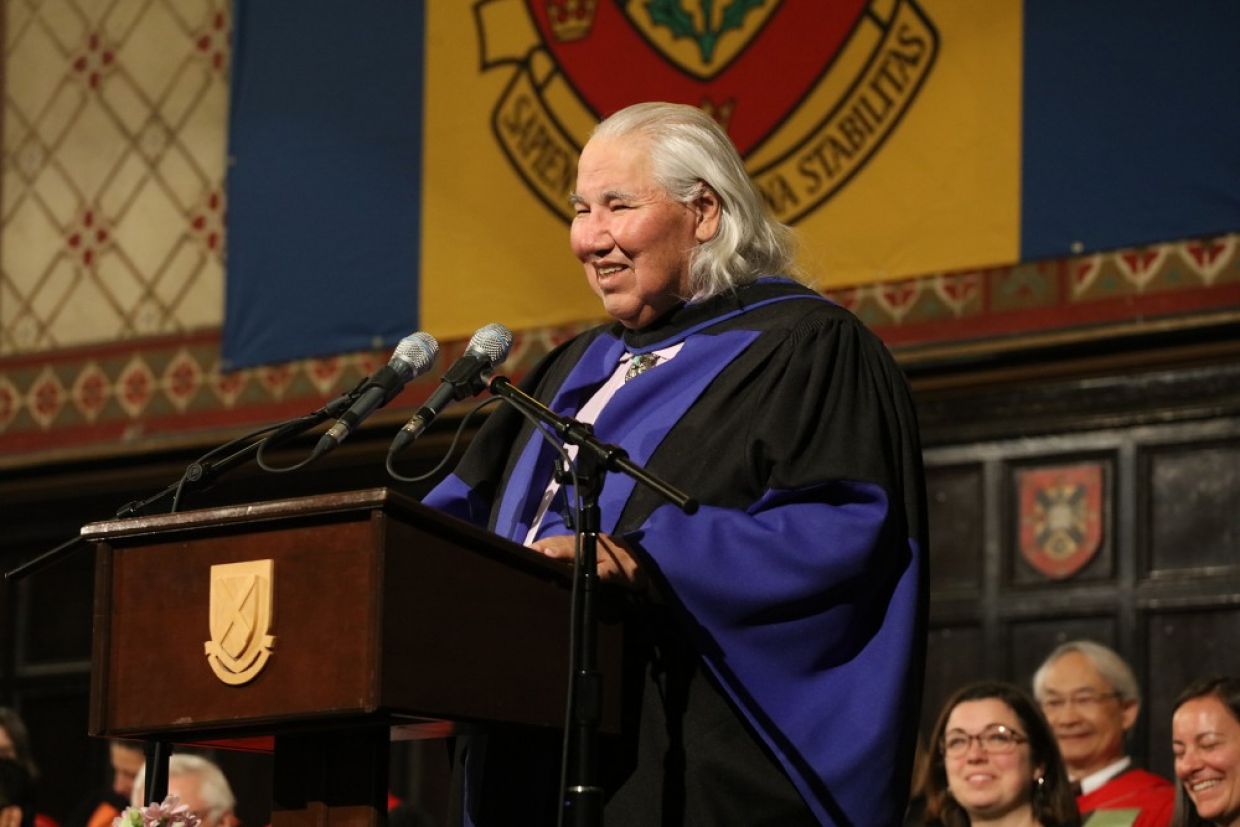 The Honourable Murray Sinclair received an honorary doctorate from Queen's during a fall convocation ceremony in 2019. (University Communications.)

The Honourable Murray Sinclair, C.C., MSc, LLD’19 (honorary) 15th Chancellor of Queen's University, has been named a Companion of the Order of Canada.  Chancellor Sinclair was one of 135 appointments to the Order of Canada, announced Wednesday, Dec. 29, by Her Excellency the Right Honourable Mary Simon, Governor General of Canada. The list also included five other members of the Queen’s community.

Chancellor Sinclair has had many accomplishments throughout his career, including acting as Manitoba’s first Indigenous judge. He was the former chief commissioner of the Truth and Reconciliation Commission and recently retired from the Canadian Senate. Chancellor Sinclair has received honorary doctorates from 14 universities, including Queen’s in 2019. He currently serves as general counsel to Cochrane Saxberg LLP, Manitoba’s largest Indigenous law firm. Chancellor Sinclair is perhaps best known for chairing the Truth and Reconciliation Commission and oversaw its ground-breaking final report in 2015.

The Order of Canada is one of the country’s highest civilian honours, recognizing those with outstanding achievements who are dedicated to shaping their communities, taking an innovative approach to their work, and who aspire to serve the nation.

Below is the list of Queen’s University community members who were also named to the 2021 Order of Canada:

Dr. Connie J. Eaves, O.C.,  Arts’64, MSc’66, was recognized for her work in advancing our understanding of cancer development as well as leadership both nationally and internationally in stem- cell biology. She was a 2019 inductee into the Canadian Medical Hall of Fame for her work on stem-cell research with translational impact on bone-marrow transplant treatments for leukemia and breast cancer, which had impacts internationally. Dr. Eaves is a professor in the Department of Medical Genetics at the University of British Columbia and a Distinguished Scientist at the Terry Fox Laboratory.

The Honourable Justice Hugh L. Fraser, O.C.,  Arts’73,  Artsci’74, has been named for his transformative contributions to Canadian sport as an internationally recognized expert in sports law and as a former Olympian. Justice Fraser was a member of the Canadian Human Rights Tribunal and is known for his ruling on the landmark Ipperwash case. In addition, the Fraser family has left a legacy of significant contributions to the Queen’s community. The Cecil Allan Fraser Bursary is a student-led bursary that was established in his father’s name for future Black law students. Justice Fraser was also a former University Council Member and was inducted into the Track and Field Hall of Fame in 1994. In recent years, he joined JAMS, the largest worldwide provider of alternative dispute resolution services.

Graham Farquharson, C.M.,  MBA’69, is known for his work in developing and managing Canada’s first mine north of the Artic Circle, located in Nanisivik on Baffin Island. As the President of Strathcona Mineral Services, he was named for his innovative leadership and philanthropic support of community organizations. The Graham Farquharson Knowledge Translation Fellowship with Physician’s Services Incorporated provides salary support for new and mid-career investigators who demonstrate the ability to complete high-impact research.

Patricia M. Feheley, C.M.,  Artsci’74, was recognized for her long-standing contributions to the Canadian art scene, and for her promotion of Inuit art and culture. Feheley is a pillar in the Canadian Inuit art scene. As Director of Feheley Fine Arts, her mission is to assist Inuit artists to obtain national and international recognition. Patricia has represented artists, led exhibitions as well as counselled government and organizations on how they can support Inuit culture.

George M. Thomson, C.M., Arts’62, LLB’65, has taken an innovative approach to leadership as a judicial educator and mentor. In addition, he is recognized for his significant contributions to family law in Canada. Currently the Senior Director-International, National Judicial Institute, Thompson has had a successful career that included Director of Education for the Law Society of Upper Canada, chaired a provincial committee on social-assistance reform and a term as Skelton-Clark fellow at Queen’s University.

The Order of Canada was established in 1967. Queen’s alumnus and Member of Parliament John Matheson, Arts’40, LLD’80, was a driving force in its development. He said the Tricolour Society at Queen’s served as a model for the Order.