Ruth and David Pattenden were supposed to make a quick trip to the doctor’s office to get Ruth’s blood test results and then have lunch. Instead, Ruth was sent to Kingston General Hospital for more tests.

“We knew she had sensitive lungs but we didn’t think it was anything serious,” says David, who was married to Ruth for 54 years. “Once we went to the hospital, she was put in a room immediately. She never came home.”

Three weeks later on Aug. 25, 2016, she was taken off life support due to complications from interstitial lung disease.

To help prevent the same tragedy from happening to others, the Ruth Pattenden Fellowship in Interstitial Lung Disease is being launched at Queen’s, thanks to a $1 million gift from the William J. Henderson Foundation.

“I was completely unaware of the disorder and how serious it was until I went through the terrible experience of losing my wife,” says David, who is a director of the William J. Henderson Foundation. “The foundation wanted to fund research that would have a practical and immediate impact on clinical care of interstitial lung disease.”

The disease is characterized by progressive scarring of lung tissue which makes it difficult to breathe. Once the scarring occurs, it is irreversible. Medication may slow the damage, but people never regain the full use of their lungs. 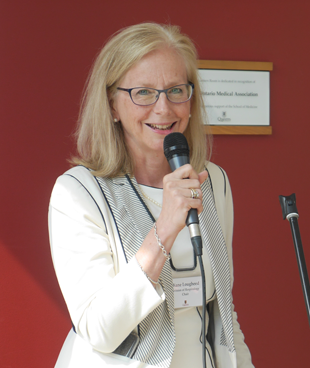 The fellowship provides doctors with special training to diagnose and treat people with the disease.

Dr. Diane Lougheed, chair of the Division of Respirology in the Department of Medicine at Queen's University and Kingston Health Sciences Centre, says the fellowship will allow doctors to provide better care.

"This fellowship will allow us to provide comprehensive clinical training to respirologists," says Dr. Lougheed.

It was an easy decision for the William J. Henderson Foundation trustees to create this new fellowship. The organization has a long history of supporting medical research at Queen’s. The foundation was set up by Judge William Henderson, a 1938 Queen’s Arts grad who passed away in 2006. Judge Henderson was grateful to Queen’s and local hospitals for the high quality of medical care he received later in life when he encountered health problems. Ruth Pattenden and Judge Henderson were also very close friends.

“If the judge were alive today, he certainly would have wanted to fund research on the disease that killed Ruth,” says David, who has five degrees from Queen’s (Arts'67, MA'69, Law'71, MEd'74, LLD'03).

Anyone wishing to support the Ruth Pattenden Fellowship in Interstitial Lung Disease can make a donation through the Give to Queen’s website.