Among the most important aspects that determine your employability are your skills and your ability to convey those skills to potential employers. This month at Gradifying we have been writing about ways of reaching out into your community to connect with colleagues and potential employers using social media.

There are some tried and true avenues. Amanda introduced us to the Twittersphere, and Jeremy took us deep into the Twitter underbelly and described how it can be used to network like a boss. He gave us a pretty incredible story it being used for networking at conferences, and if I didn’t know he’s a stand-up fella I’d call fish story. (But he is a stand-up chap, and I stand beside his stories.) 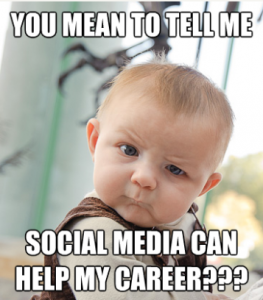 It’s never too early to connect.

We have all heard of LinkedIn, and some of us are connected with it. Sharday introduced a new initiative of the School of Graduate Studies with probably the most direct and effect method for Queen’s graduate students, using a LinkedIn group named Queen’s Connects Career Network.

There are a number of other ways for us grad students to connect with Queen’s and the plethora of resources it has to offer. Queen’s School of Graduate Studies has a Facebook page, which is a good way of learning about events and workshops that are happening for graduate students. These posts are more selective and spaced out than all that the SGS has to offer, and to keep most up-to-date you can keep you eye on the weekly SGS Newsletter that is emailed out by Colette Steer.

For those not familiar with Flickr, it’s a repository for photos and images. Queen’s and an extensive collection of images in their Flickr page, as does Queen’s SGS. Aside from being beautiful photos and memories for many, you may find them useful if you’re setting up an event related to Queen’s and would like to have some images at hand.

These social media outlets are great ways to link with your broader community and to take advantage of the connections already made here at Queen’s. We’ve all heard stories of how people have been cavalier with social media in their personal lives and it has had crippling repercussions for them professionally. There are literally thousands of blog posts and articles on do’s and don’ts with social media, all of them venn diagrammatically overlapped to the tune of 85.26% (I just made up that number … and “venn diagrammatically”, for that matter), so I’m not going to pretend to contribute something new. Instead, here are “6 Social Media Mistakes that Will Kill Your Career” (a gripping and terrifying title) and a tip sheet produced by University of Toronto Mississauga on how to use social media in your career.

So, remember, using social media to facilitate your career is a double-edged sword. Use it extensively, but be attentive that when you put something out there, it’s out there, everywhere, forever.