This year, TEDxQueensU has partnered with the Queen’s School of Graduate Studies (SGS) to organize a TEDx Salon event. The purpose of the Salon event is to showcase graduate student research and interests. The Salon event is described as a unique gathering, where attendees will listen to speakers and engage in a discussion. 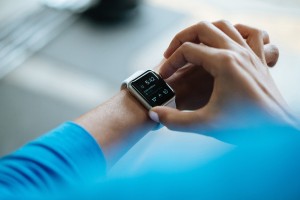 The first Salon event was held on October 17th – on the topic of Wearable Technology. Wearable technology are smart electronic devices that can be worn on the body as implants or accessories. A few examples of wearable technology include smart watches, smart glasses, and activity trackers. Wearable technology has been incorporated into many areas such as commercial use, healthcare, navigation systems, and law enforcement.

I decided to attend the Salon event for three reasons. First, as an Information Systems researcher, I’m interested in how companies can exploit technology to gain advantage. The Salon event is a chance for me to learn more about a technology that is receiving a lot of attention in the business world. Second, I’m curious to see how technology research in other fields are being done. The speakers for this event hail from sociology and rehabilitation science. Last, I’m curious about TEDx events in general. The Salon event description hints at an intimate gathering where attendees discuss their opinions in a friendly atmosphere – this piqued my interest.

At the beginning of the Salon event, the attendees were randomly assigned to groups of four to seven people per round table. The event started with a 10-minute TEDx Talk video on how a non-profit organization is using smart phones to provide eyecare to people in rural areas. It was amazing watching how smart phones and 3D printers were used to bring effective and cheap eyecare to those in need. After the video, we listened to the three presenters. Each presenter gave a talk on the use of wearable technology in distinct areas – public safety, physical rehabilitation, and citizen sensing. 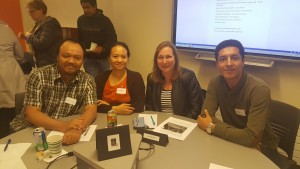 My discussion group. I’m in the orange blouse and the lady next to me is the facilitator. The two gentlemen are fellow attendees. Another group member is camera shy and took this picture instead.

The second part of the Salon event involved a case-study discussion. The case study described a scenario in which a municipal government partnered with a company to collect data. The data collection is done by citizen volunteers via the use of a wearable technology. Each group (table) was given two to three questions along with a facilitator. At the end of the discussion period, a representative from each group would have the floor to highlight key points from his/her group discussion.

During the event, I got the chance to talk to a fellow graduate student and attendee – Shikha Gupta. Shikha is a second year PhD student in rehabilitation science. She attended the Salon event for reasons like mine: to learn more about the topic and to see how those in other disciplines would study the topic. She commented on how attending the Salon event made her realize the tendency in her field – to view wearable technology as entirely positive. She now realizes the negative potentials such as privacy concerns. Shikha plans to attend future TEDxQueensU events and would recommend such events to her friends. 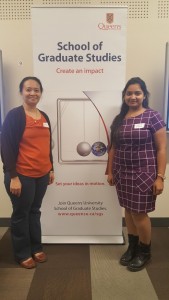 Me and Shikha Gupta.

I got more out of attending the Salon event than I thought I would. Because I’ve been working on my thesis for some time, I often feel isolated. The Salon event provided a chance for me to talk about my research and discuss how my work intersects with research on wearable technology. I was also surprised to find myself enjoying the discussion session. As an introvert, it is often difficult for me to interact with unfamiliar people. The discussion was engaging. My group members seem interested in what I have to say, and vice versa. Furthermore, I was inspired by the presenters and seeing how each presenter relates their work to practice. Let’s just say that I feel my research mojo being re-energized and I’m now brainstorming ways to make my work more useful for practice.

I look forward to attending similar events in the future. If you are also interested, you can keep an eye out for announcements at TEDxQueensU website or Facebook page.