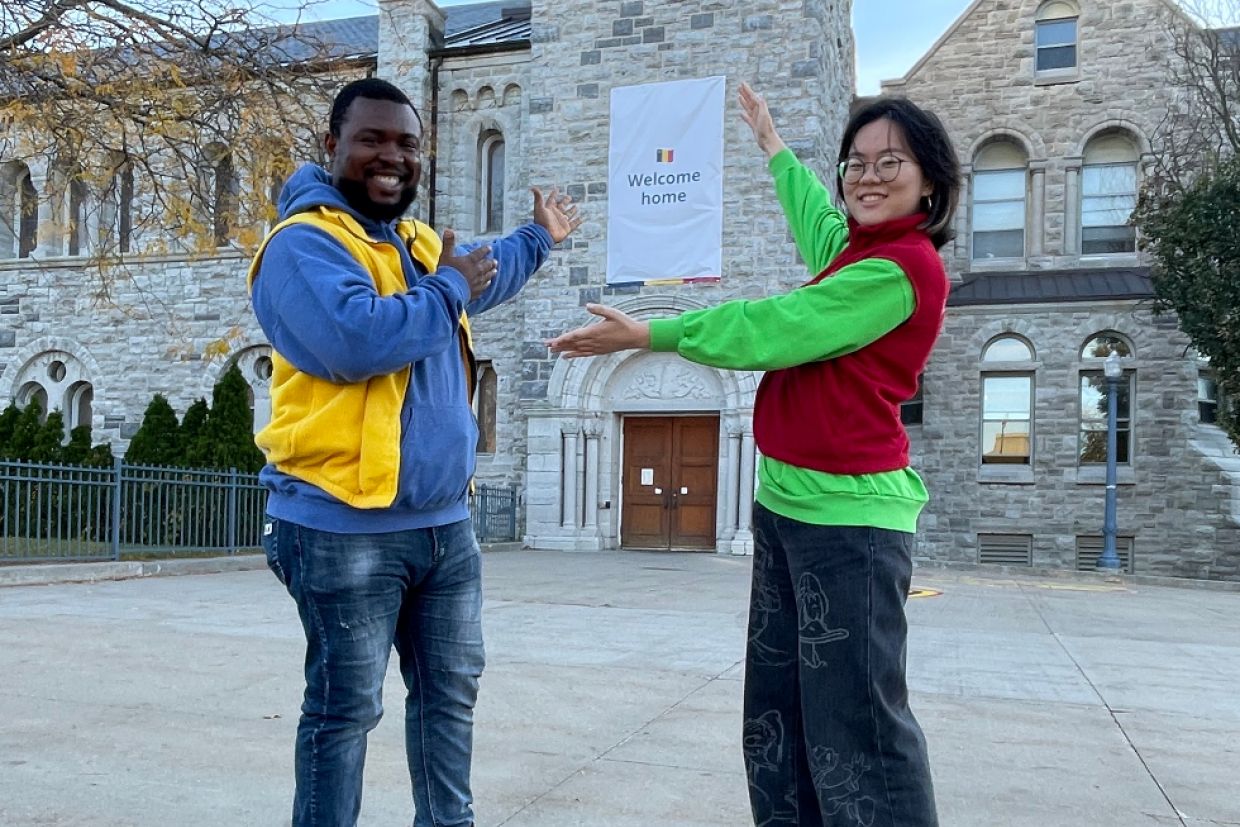 Queen's staff and student volunteers welcomed alumni back to campus during Homecoming in October.

Here is look at some of the top Queen's moments and news from the past 12 months.

Feb. 16: Agnes Reimagined moving forward
An internationally recognized architectural firm, KPMB Architects, was selected to oversee the design phase of Agnes Reimagined, the major construction project that will revolutionize and change the Agnes Etherington Art Centre. The Agnes Reimagined campaign was kicked off with a transformational gift of $54 million from Bader Philanthropies, Inc.

April 1:  April Fool’s Day prank
Did you know an etymologist discovered a decades-old Gaelic translation error that resulted in Queen’s teams mistakenly being named the Gaels? The university changed our sports teams’ name to the correct translation: the Fighting Squirrels. It’s not true but it resulted in a popular social-media post on April Fool’s Day.

April: Times Higher Education Impact Rankings
For the second year in a row, Queen’s placed in the top 10 globally in Times Higher Education Impact Rankings (out of more than 1,500 post-secondary institutions). The rankings measure how well universities are advancing the United Nations’ Sustainable Development Goals (SDGs), a universal call to protect the planet and people in areas such as eradicating poverty, and advancing climate action and clean energy.

May and June: In-person convocation returns
After the COVID-19 pandemic cancelled in-person convocations in 2020 and 2021, new grads finally had the chance to walk across the stage and receive their degrees. Graduates who missed their convocations the previous two years, plus the 2022 grads, were all invited, resulting in the venue moving to the Leon’s Centre to accommodate the higher numbers.

June: Order of Canada
Three members of the Queen’s community were appointed to the Order of Canada, one of the country’s highest honours. Moira Hutchinson, Arts’64, MA’68, is an advocate who promoted change through socially responsible investing, Professor Emeritus Ian Hodkinson is the founder of the Queen’s Art Conservation program, and R. Jamie Anderson is an investment banking leader who is also a Queen’s volunteer and supporter.

June: Farewell celebration for Chancellor Jim Leech
After becoming Queen’s 14th Chancellor in 2014, Jim Leech, MBA’73, spent the next eight years helping more than 40,000 graduates during convocation ceremonies, providing leadership to many boards, and supporting many philanthropic initiatives. On June 24, friends and colleagues held a celebration at Grant Hall to praise his dedication to Queen’s students and tireless efforts that helped improve life at Queen’s.

August: Death of Isabel Bader
Isabel Bader, LLD’07, passed away at the age of 95. She and her late husband, Alfred, transformed Queen’s through their immense generosity. Among their many notable gifts were The Bader Collection (comprising more than 500 works of art, including four Rembrandt paintings) and a centre for the performing arts. They endowed chairs and created numerous bursaries and awards at Queen’s to advance education and research.

August: New Albert Street residence opens
A new five-storey residence opened at 156 Albert St. provided housing to 320 new undergraduates and 10 dons. The residence has some unique elements, including nap pods, a prayer space, indoor bicycle storage, and an outside courtyard that serves as an Indigenous gathering space.

October: Canada’s most powerful women
Six alumnae and one Queen’s student were named to the list of Canada’s most powerful women. Included on the list were Deryn Rizzi, Artsci’97, Ed’98 (the fire chief and director of emergency management with the City of Mississauga) and Ishita Aggarwal, Meds’23 (founder of Mom’s The Word, a non-profit organization that hosts free prenatal workshops for homeless and low-income women).

October: Return to in-person Homecoming
Welcome home! After two years of online Homecoming, about 2,000 alumni from as far away as Albania, Australia, Ghana, Poland, and Switzerland came back to campus on the Oct. 28-30 weekend.

November: Chancellor Murray Sinclair has official installation ceremony
The Honourable Murray Sinclair was officially installed as Queen’s 15th chancellor during a special in-person/virtual ceremony. Sinclair is the first Indigenous person to serve in this role at Queen’s.

November: Alumnus’s book makes New York Times’s top 100 list
Congratulations to Elamin Abdelmahmoud, Artsci'11. Not only was his debut book, Son of Elsewhere: A Memoir in Pieces, a bestseller, it was also named to The New York Times 100 Notable Books of 2022.