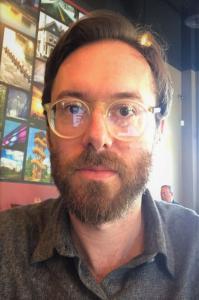 Dr. Dustin Atlas is the  Director of Jewish Studies and Assistant Professor in the School of Religion at Queen’s University. He specializes in contemporary Jewish thought, identity and aesthetics, especially works that concern fragility, imperfection, and non-human creatures.
His work attempts to build bridges between Jewish Studies and the broader field of Religious Studies, using Jewish thinkers to understand contemporary Judaism in light of recent political, intellectual and ethical trends (especially post-colonialism, new materialism, animal studies, and affect theory). His scholarship seeks to show how Judaism, Jewish thought, and Jewish politics have begun to shift from an exclusive concern with nations (humanism, cosmopolitanism, ethnicity, and Zionism) to adapt to a globalized world view (post-human, trans-national, and post-Zionist).
His current book project work (Buber Talks: Jewish Dialogue and the Nonhuman World) uses the work of Martin Buber to interrogate contemporary post-human concerns in Jewish thought, politics, and life, exploring the ways in which Jewish thought allows us to engage the non-human. In addition to this, he is working on the teaching of religion in Palestine.