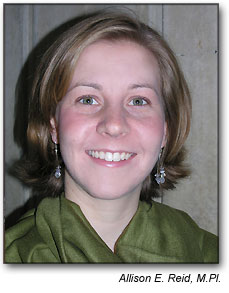 Allison enrolled at SURP in 2003, after completing an Honours B.A. at the University of Toronto with a double major in Architecture and Urban, Economic and Social Geography. While attending SURP, Allison worked for two summer terms at the City of Mississauga in Urban Design. During these terms, she contributed to several interesting projects, including the City's Accessibility Design Guidelines and the Urban Design Handbook for Low-rise Multiple Dwellings.

Upon graduation in 2005, Allison joined the Urban Design section of City Planning at the City of Toronto. As an Assistant Urban Designer, she worked primarily on urban design guidelines and was involved in the production of the Percent for Public Art Program Guidelines  and the Design Guidelines for "Greening" Surface Parking Lots

Promoted to Urban Designer in 2007, Allison continues her work on urban design guidelines - updating the Infill Townhouse Guidelines and the Urban Design Streetscape Manual. She is also involved in coordinating the biennial Toronto Urban Design Awards program and a Study of the Public Realm Surrounding Eleven Major Cultural Institutions.

When asked what skills developed at SURP were most important to her success, she replied: "Most notably, the many presentations to classmates and clients, the use of computer programs such as Excel, AutoCAD and GIS in course work, and the hours of consensus building and coordination on group projects."