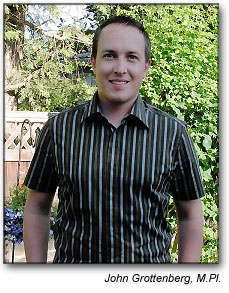 John enrolled in SURP in 2006 after completing a B.A. in Geography at the University of British Columbia and then taking a couple years off to work and travel in places including the South Pacific, Australia, and Southeast Asia.

While attending SURP, John concentrated in the Land Use and Real Estate Development stream. His Master's report focused on the planning and urban design elements of downtown Vancouver waterfront parks. Aspects of SURP that John particularly enjoyed include the land use project course, the numerous presentations, the group projects and other opportunities for teamwork, and the program's close-knit community feeling.

Upon graduation in 2008, John began working in the Strategic Transportation Planning Branch at the City of Vancouver. He assisted with a variety of projects, including separated bike lanes and public space initiatives in Vancouver's downtown, as well as the Transportation 2040 Plan.

Since 2011, John has been working in the Vancouver Downtown Division of Planning. He was a key member of the team that prepared the award-winning West End Community Plan, adopted by City Council in November 2013. Since then, he has been focused on plan implementation, including public space improvements, development and rezoning applications, and a toolkit for multi-family laneway infill housing.