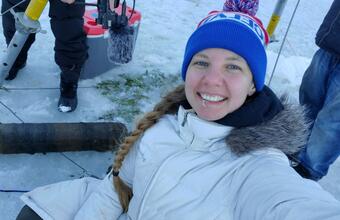 Monica originally planned to research the impact of human activity on Long Lake, a large lake in Northern Ontario. Before submitting her research proposal, Monica contacted the Indigenous communities bordering Long Lake to ensure she had permission (and collaboration) to conduct her studies. “We need to respect the answer no. You’re not really asking unless you’re willing to accept a negative answer.” Although the Long Lake project was approved, it was unfortunately delayed due to the pandemic. This led Monica to modify her project and also study core samples from Crawford Lake in Milton, Ontario.

Crawford Lake is meromictic, meaning that the top and bottom water layers within the lake do not mix, which in turn lead to accumulating layers of sediment. The unique conditions in Crawford Lake created varved or seasonal deposits of minerals, algae, and other material that can be analyzed to study climate changes. Similar to her initial research proposal, Monica performed a ceremony at the request of an Indigenous elder which included using cedar branches to care for and honour Crawford Lake before collecting samples.  Monica uses core samples of these layers to compare the rates of climate change during the Holocene (beginning 11,700 years ago) to the modern era, or Anthropocene.

Monica actively practices her Anishinaabe heritage, but it was not always the case. Her family has been non-status for several generations, and their Indigenous heritage was not discussed. “Only when I got to university did I start exploring the complexities of why it was considered shameful.” Transitioning from Lakehead to Queen’s also came with a big culture shock. Monica found that many Queen’s students hailed from generational higher education, which differed from her lived experience. “It was very difficult for me. But the differences became integral to my personality. I was much more able to see myself and understand myself by seeing what I was not. And once I got to see myself better, I was able to find solidarity with those like me.” Monica’s advice for Indigenous students is to find community and secure spaces to address their traumas together. In her opinion, the issues faced by Indigenous persons differ from persons from the dominant society. As such, it’s important to have a community and a guide, therapist or mentor who understands.

The Four Directions Indigenous Student Center is open to everyone, including those who, like Monica, are non-status Indigenous persons. The topic of status is nebulous and controversial. In Monica’s words, “the biggest issue with status is that the Canadian government are the only ones who can decide who is Indigenous. It’s as ridiculous as France deciding who is a citizen of Norway.” In her opinion, communities need to decide their own membership qualifications free from the influences of capitalism and colonialism.

Simultaneously, Monica is aware of the privileges she has experienced. For example, she passes for ‘settler,’ and did not grow up on a reservation. When Monica does interviews (like this one), she is receptive and accountable. With regards to her work with the Center for Teaching and Learning (CTL), Monica is similarly open to discussion and change. “I’m good for the position, but I’d like to make the space ready for when someone more qualified who has more lived experience than I do can access the position.” The notion of willingly stepping down from positions of authority, rather than being deposed, seems alien to the conventional hierarchical structure of Western academia. While many people like the safety that comes with consistency and power, Monica feels that it is against her expression of Anishinaabe culture to deny others the opportunities to grow.

When asked about her plans, Monica was optimistically ambivalent. Her philosophy is to trust where the universe guides her. “The more time I spend in academia and science, the more I learn about who I am and where I fit as an Anishinaabe woman. I become more anchored and well-tethered into this world by understanding what I am not.” Although there is still great room for growth in truth and reconciliation at Queen’s, and Canada at large, Monica believes there are some areas of improvement. Her advice to indigenous allies is to look and listen for ways to help, rather than asking. “Be more sensitive to the cues from marginalized students. Even if you can’t solve the problem, it’s nice to have someone listen as you work through it.”