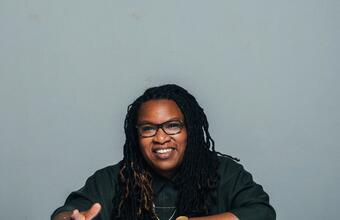 Nataleah Hunter-Young is one of three Pre-Doctoral Fellows in Black Studies, the first fellows of this new and growing program. They come to Queen’s from Toronto as a PhD candidate at Toronto Metropolitan and York Universities and an international programmer for TIFF, where they lead feature film selections from Africa and the Arab-language region of West Asia. Prior to moving into film, they received degrees in social work from McMaster and Toronto Metropolitan Universities and were a youth worker in Toronto and abroad in Jamaica for over ten years. Nataleah was also a member of the inaugural Black Studies Summer School cohort co-hosted virtually by University of Toronto Scarborough and Queen’s in 2021, which led them to this program and to the exciting developments happening in Black Studies at Queen’s.

Nataleah’s current research is deeply interdisciplinary. Their doctoral research project considers the social and cultural impacts of social media videos documenting anti-Black police brutality through the interpretive work of three Black visual artists: Anique Jordan, Cameron Granger, and Sethembile Msezane. Nataleah’s research consists of interviews with each artist, where they discuss their creative processes and how each challenges Euro-American imperial ways of knowing that allow for the routinized and spectacular state-sanctioned violence against Black life. They are guided by the work of Caribbean theorist Sylvia Wynter, and describe their research as considering “what each artist’s creative text does rather than what it can be interpreted to mean. In this way, each artist’s practice presents a unique way of witnessing without replicating images of violence.” Nataleah’s project also has a creative component, which will involve spending the winter term of their fellowship learning silkscreen printing, so that they can develop an “abstracted visual treatment of the findings” to act in place of a conclusion.

Nataleah is interested in aesthetics, and how they “mediate what is seeable and knowable about the world, its histories, presents, and futures.” They are particularly interested in how Black imaginaries and emancipatory knowledge-practices are communicated and disseminated through expressive culture and expressive objects like art. These include practices and knowledges like Black liberation, Black futurities, abolition, Pan-Africanism, mutual aid, kinship, and marronage.

Nataleah has plans for future work emerging from these interests which asks questions about aesthetic disturbances to racial capitalism, including a forthcoming review of Kara Keeling’s 2019 book Queer Times, Black Futures, which will be published in the spring 2022 issue of Jump Cut: A Review of Contemporary Media. Nataleah is looking forward to teaching Technologies of Blackness and Hip Hop in the fall and beginning as an assistant professor in the Faculty of Information and Media Studies at Western as part of their new Creative Arts and Production program in January.

The Black Studies Pre-Doctoral Fellowship will run for twelve months, from January 2022 to December 2022. To learn more about Black Studies, please visit their website.