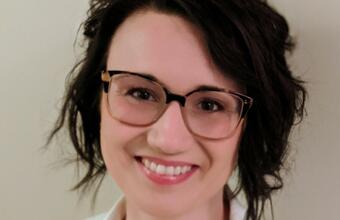 Consent. It’s a word we’ve all heard and know the importance of. For Karine Millaire, a postdoctoral researcher in the Faculty of Law, the issue of consent is more complicated. Karine describes her work as studying consent transactions, specifically focusing on the waiver of right to life in the context of medical assisted dying. When an individual consents to something, what impact does this have on the rights of the greater society?

During her undergraduate degree, Karine says that she was always very focused on the application of what she was doing, and never would have believed someone if they’d told her she would do postdoctoral research in legal theory. But after working as a lawyer, she started to observe difficulties in reconciling freedom of choice and the protection individual rights. “I noticed there was a need to provide something more to protect the human rights of a person,” she says. Karine describes the Canadian legal system as one that was developed to protect our human rights, and not one that is well equipped to deal with scenarios when individuals choose to waive these rights. “We have some tools, but I saw there was a need to work on this and provide something better… it’s really rooted in something practical.”

“You can consent for yourself, but the law we adapt is also there to protect the equal value of all lives, including the vulnerable people, the people who are victims of discrimination,” Karine describes. Choices that we make are not disconnected from the context in which they are made, and within this context there is the reality of inequalities. Because of this, “the choice to waive your right must be delimited or limited to offer equal protection of rights.” These issues led Karine to complete her PhD at the University of Ottawa, and now to Queen’s where she continues to study them.

To Karine, a large benefit of Queen’s is the people she gets to work with. “People [are developing] original ideas and working on new concepts,” she says. “To go further on research, I think I really needed to have a conversation with people who were really focused on the same type of methodologies.” Queen’s provides her with the perfect atmosphere in which to do this.

In addition to the applicability of her work, something Karine really enjoys about it is its novelty. “The way we think about our rights is also a reflection of what is happening in society,” she describes. It’s also not something that many people have studied; in fact, much of her PhD work was just characterizing the problems that exist. This means it’s constantly opening up questions and new avenues for study.

While research is often split into the dichotomies of being applied or theoretical, and rights are often viewed as either those of an individual or those of society, Karine’s research helps to bridge these gaps.

To learn more about the Faculty of Law and research taking place at Queen’s, take a look at Queen's Law website.