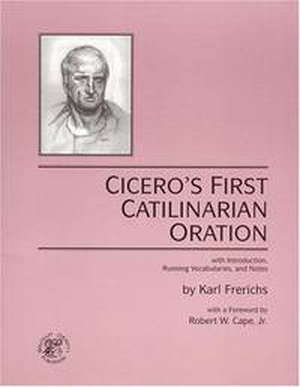 Because Marcus Tullius Cicero, the Roman statesman and Latin writer, who died in 43 B.C., left us a vast body of work, a corpus that includes letters to friends and family, philosophical treatises, forensic and political speeches, we know as much as we do about the Roman Republic of the 1st cent. B.C. Although there were other Latin prose writers, Cicero is by far the most preeminent.

For LATN 321, which is offered together with LATN 421 and the graduate level 814, all students will read one of Cicero’s most famous speeches, the First Speech against Catiline. The speech is important not just as an excellent example of Latin prose and rhetoric, but as an historical record. The speech was delivered in the Roman Senate in 63 B.C. by Cicero the consul against someone accused of plotting to overthrow the Roman state. In class students will translate but they will also read aloud the words of the text in order to recreate the effect that Cicero received on that day.

Students who are enrolled as 4th year or graduate students will also be responsible for sections from the subsequent speeches delivered against Catiline.

Objectives – In reading this text, students will improve their knowledge of Latin vocabulary and their skill of translation into English. Thanks to the content of the speech, students will also learn much about Roman history, especially the politics and social structure of Rome during that time.