The Classics department recently welcomed visiting scholar Dr. Lisa Maher, Associate Professor in the Department of Anthropology, University of California, Berkeley. She recently gave a talk, entitled Persistent Place-Making in Prehistory: the Creation, Maintenance, and Transformation of Landscapes in Southwest Asia (and Beyond), as part of the Department's Classics Presents... colloquium and was featured on the Faculty of Arts and Science's News webpage.

"I am a prehistoric archaeologist and geoarchaeologist specializing in the prehistory of Southwest Asia. I finished my PhD at the University of Toronto, where I experienced fieldwork in Jordan for the first time and was hooked. After a post-doc and research position at the University of Cambridge, I joined the Anthropology Department at Berkeley as an environmental archaeologist. I am interested in exploring the complex relationships between people and the environment, including the creation and transformation of landscapes. I have been running archaeological projects in Jordan for over twenty years, and I have also worked as a geoarchaeologist in many other countries throughout the world. Recently, I’ve broadened my horizons to explore island archaeology and the arrival of humans in Cyprus and Hawaii." 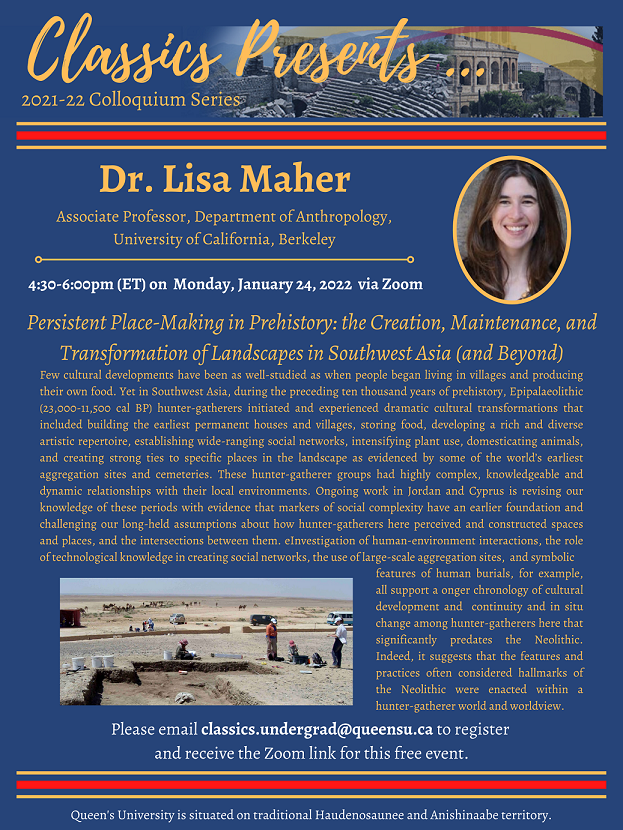 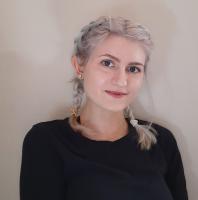 Lilly Hickox (BAH '21) presented two (2) projects.  One she completed under the supervision of Dr. Barbara Reeves and the other with Dr. Cristiana Zaccagnino as supervisor.  The presentations took place on 12 March, 2021 as part of the 2021 Inquiry @ Queen's Conference held virtually.

In Light of the Lamps: A Comprehensive Analysis of the Ceramic Oil Lamps from the Roman Fort at Humayma
Presenter: Lilly Hickox, Classics
The archaeological site of Humayma, located at the northwest corner of the Hisma desert of Jordan, has a long history of permanent settlement; beginning with the Nabataeans, followed by Roman, Byzantine, and Islamic occupations. Shortly after Emperor Trajan’s conquest of the Nabataean Kingdom in 106 CE, a Roman fort emerged alongside the pre-existing trade route, which the Romans renamed the Via Nova Traiana.
Excavations at the fort, directed by J. P. Oleson in 1995, 1996, 2000, 2004, and 2005 and M. B. Reeves in 2012, unearthed a collection of ceramic oil lamps, comprised of four complete lamps and fifty-eight fragments. The author recently carried out a complete evaluation of the fort’s ceramic lamp collection, remotely analysing the lamps based on project images, descriptions, and contextual information in order to produce a catalogue and report.

Results included Nabataean, Roman, and Byzantine types, dating from the 1st to 5th century CE, revealing an intricate and diverse account of material culture at the fort. The Nabatean rosette lamp and Byzantine slipper lamp were the two most prevalent types, while few Roman lamps were found. The author interpreted data and made suggestions in light of the history, regional trade, stratigraphic complexities, and evolving cultural identity of the site. This poster summarizes the ceramic lamp findings, identifies anomalous items, and considers the significance of chronological aberrations in relation to the fort’s military and civilian occupations over 400 years.

Interpretation and Analysis on the Polychromy of Attic Korai from Votive and Funerary Contexts
Presenter: Lilly Hickox, Classics
The characteristic woman of Archaic Greek sculpture, the kore (pl. korai) stands proud, rigid, frontal, and omnisciently smirking at her viewer with the famous Archaic smile. She has been interpreted as an attendant, goddess, or deceased maiden, wearing representations of draped diaphanous robes, jewelry, and bearing offerings. Yet where her now clean marble surface exists once was intricately illuminated with vibrant pigments, inlaid stones, metals, and often accompanied by accessories of various materials. Recent advancements in analytical techniques have enabled scholars to delve deeper into the study of these sculptures, uncovering traces of pigments which would otherwise be left undetected. However, the image that these colours paint has yet to be thoroughly analysed and a history of intentional removal and surface cleaning has postponed a complete evaluation of the sculptures. In Attica, from the sixth to the early 5th century BCE, korai reflect stylistic progression and variation within and between archaeological contexts. A palette of colours was used to display features now lost to the modern eye. This paper examines the korai, proposing meaning through colour, patterns, and representations. Using polychrome reconstructions, spectral data, pottery, archaeological evidence, and ancient literary sources, the author interpreted the polychromy and decorative elements of Attic korai from votive and funerary contexts. Asking questions on symbolism, utility, cultural connection, and identity of the sculptures; this paper explains the use of pigments in relation to the symbolism of the sculptures and to their role in the greater framework of the Archaic Greek world.

Launch of the Queen's Museum of Near Eastern Archaeology - Virtual Exhibit

Elyse Richardson (BAH ’20) and Dr. Barbara Reeves have just launched the Queen’s Museum of Near Eastern Archaeology - Virtual Exhibit, hosted by Queen’s University Library. The exhibit re-examines a now forgotten museum, containing ancient objects excavated at Jericho and Dhiban, which had been established on Queen’s campus in the 1950s for teaching, research, and public outreach purposes. Although the physical museum no longer exists, Elyse and Dr. Reeves have been able to recreate its history from the objects’ excavation to the museum’s opening to the collections’ departure. A gallery includes colour images of 20 of the original objects that were in the museum.

Update:  01 May 2020
The local Kingston newspaper, The Whig-Standard, has published an article about the new virtual exhibit created by Dr. Reeves and Elyse ... nice to see this getting some well-deserved press!