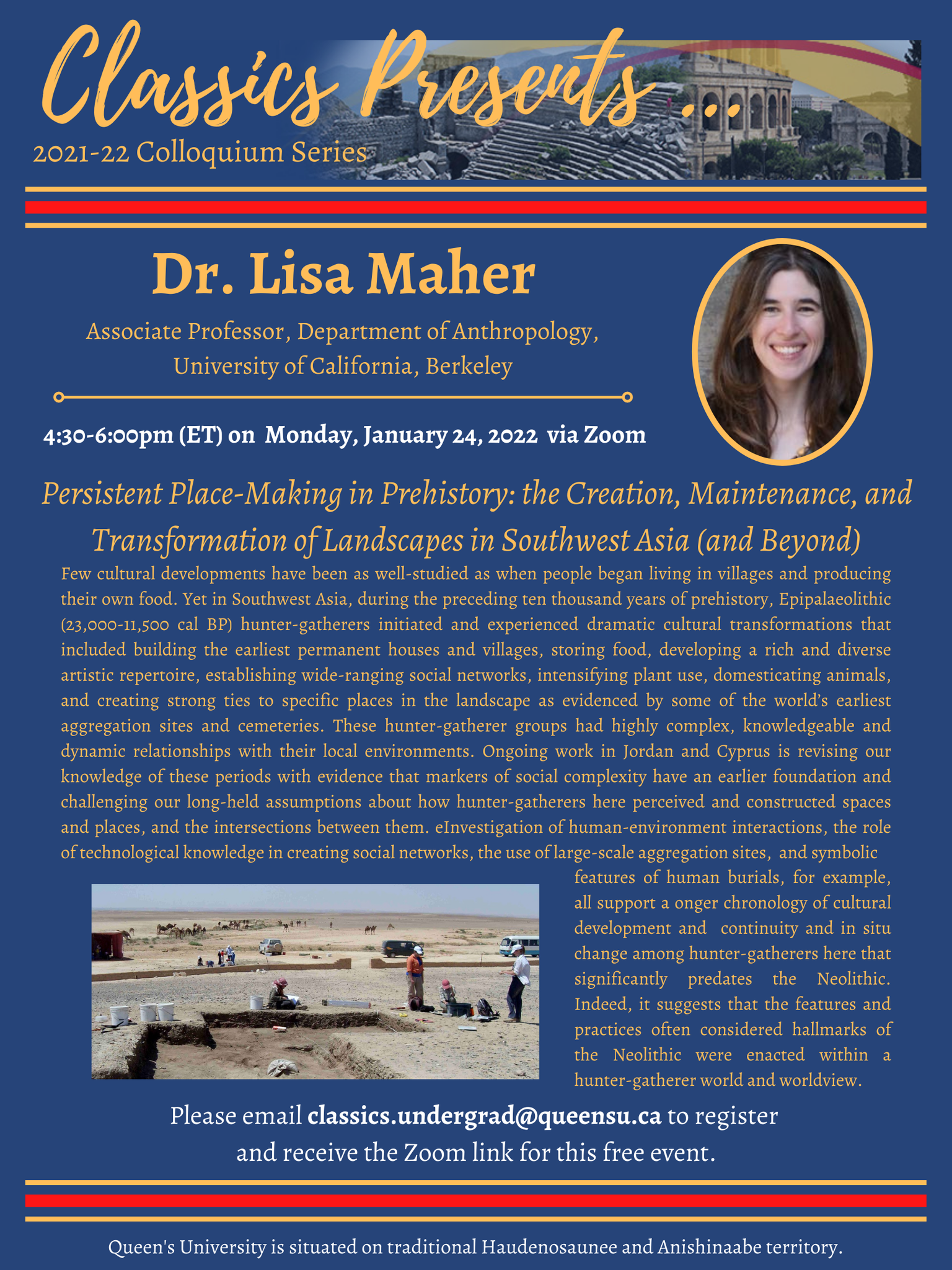 "I am a prehistoric archaeologist and geoarchaeologist specializing in the prehistory of Southwest Asia. I finished my PhD at the University of Toronto, where I experienced fieldwork in Jordan for the first time and was hooked. After a post-doc and research position at the University of Cambridge, I joined the Anthropology Department at Berkeley as an environmental archaeologist. I am interested in exploring the complex relationships between people and the environment, including the creation and transformation of landscapes. I have been running archaeological projects in Jordan for over twenty years, and I have also worked as a geoarchaeologist in many other countries throughout the world. Recently, I’ve broadened my horizons to explore island archaeology and the arrival of humans in Cyprus and Hawaii."

Persistent Place-Making in Prehistory: the Creation, Maintenance, and Transformation of Landscapes in Southwest Asia (and Beyond)

Few cultural developments have been as well-studied as when people began living in villages and producing their own food. Yet in Southwest Asia, during the preceding ten thousand years of prehistory, Epipalaeolithic (23,000-11,500 cal BP) hunter-gatherers initiated and experienced dramatic cultural transformations that included building the earliest permanent houses and villages, storing food, developing a rich and diverse artistic repertoire, establishing wide-ranging social networks, intensifying plant use, domesticating animals, and creating strong ties to specific places in the landscape as evidenced by some of the world’s earliest aggregation sites and cemeteries. These hunter-gatherer groups had highly complex, knowledgeable and dynamic relationships with their local environments. Ongoing work in Jordan and Cyprus is revising our knowledge of these periods with evidence that markers of social complexity have an earlier foundation andchallenging our long-held assumptions about how hunter-gatherers here perceived and constructed spaces and places, and the intersections between them. Investigation of human-environment interactions, the role of technological knowledge in creating social networks, the use of large-scale aggregation sites, and symbolic features of human burials, for example, all support a longer chronology of cultural development and continuity and in situ change among hunter-gatherers here that significantly predates the Neolithic. Indeed, it suggests that the features and practices often considered hallmarks of the Neolithic were enacted within a hunter-gatherer world and worldview.

Dr. Sinclair Bell, Professor in the Department of Art History at Northern Illinois University, School of Art and Design

How to do the Archaeology of "Race" in the Roman Empire: Novel Approaches to Ancient Objects

The representation of foreign cultures with manifest “racial” differences, such as unfamiliar physical traits or strange-seeming ethnic customs, has been a longstanding and often visceral site for human artistic expression. The visual and material culture of the Roman Empire (c. 100 BCE-200 CE) provides a particularly abundant record of such cultural encounters, which render visible complex formulations of foreignness, social hierarchy, and power.

This lecture focuses on how Roman artists represented Aethiopians (Black Africans) in different visual media, and explores issues related to the patronage, production, and viewership of these works. It looks at the conventions of their imagery, the critical axioms of their study, and their contemporary re-presentation in a museum setting. 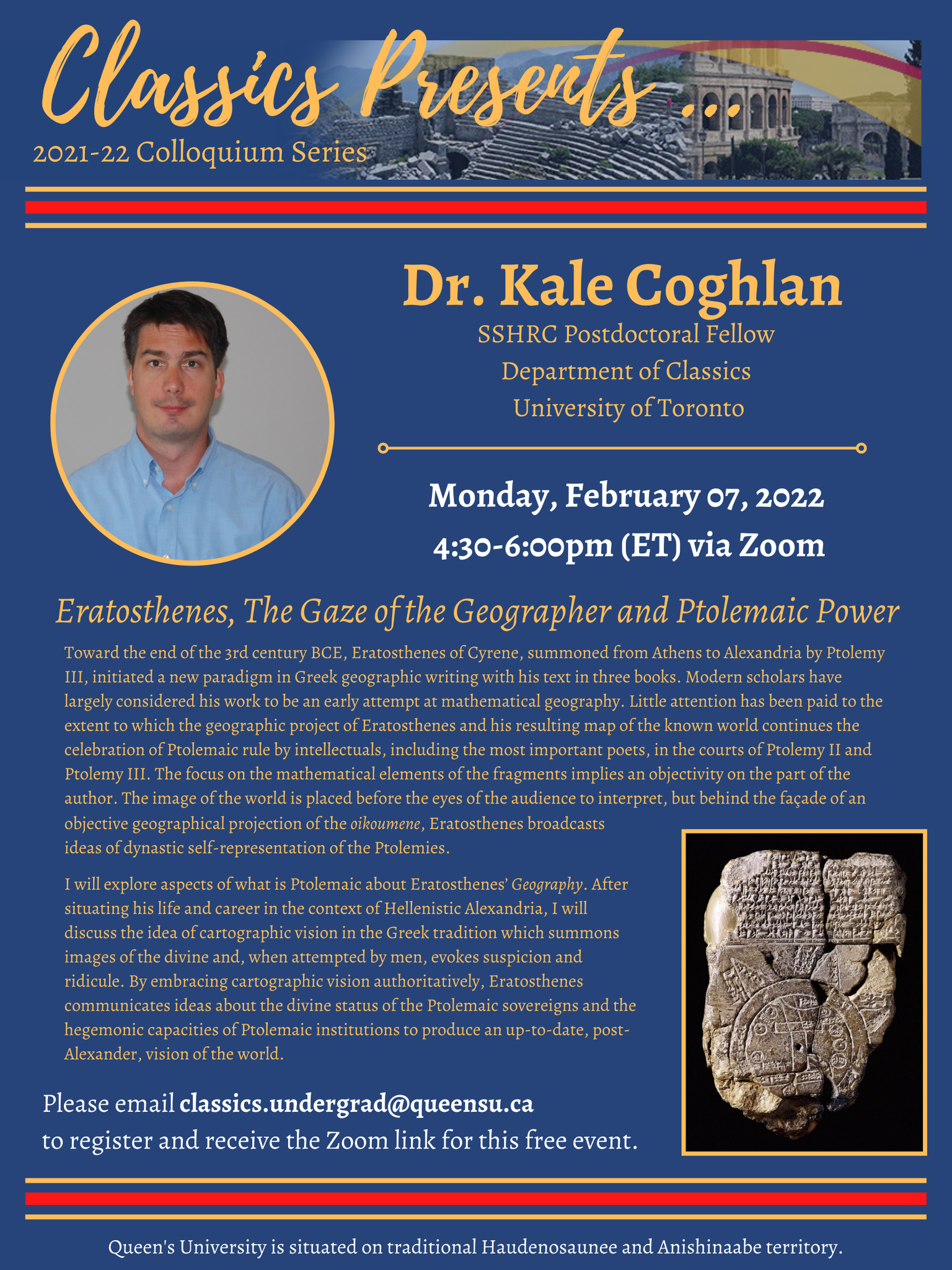 Dr. Kale Coghlan, SSHRC Postdoctoral Fellow in the Department of Classics at the University of Toronto

Eratosthenes, The Gaze of the Geographer and Ptolemaic Power

Toward the end of the 3rd century BCE, Eratosthenes of Cyrene, summoned from Athens to Alexandria by Ptolemy III, initiated a new paradigm in Greek geographic writing with his text in three books. Modern scholars have largely considered his work to be an early attempt at mathematical geography. Little attention has been paid to the extent to which the geographic project of Eratosthenes and his resulting map of the known world continues the celebration of Ptolemaic rule by intellectuals, including the most important poets, in the courts of Ptolemy II and Ptolemy III. The focus on the mathematical elements of the fragments implies an objectivity on the part of the author. The image of the world is placed before the eyes of the audience to interpret, but behind the façade of an objective geographical projection of the oikoumene, Eratosthenes broadcasts ideas of dynastic self-representation of the Ptolemies.

I will explore aspects of what is Ptolemaic about Eratosthenes’ Geography. After situating his life and career in the context of Hellenistic Alexandria, I will discuss the idea of cartographic vision in the Greek tradition which summons images of the divine and, when attempted by men, evokes suspicion and ridicule. By embracing cartographic vision authoritatively, Eratosthenes communicates ideas about the divine status of the Ptolemaic sovereigns and the hegemonic capacities of Ptolemaic institutions to produce an up-to-date, post-Alexander, vision of the world.

The Kneader of Patience Tastes It: An Ethnoarchaeology of Roman North Africa

What is the common element between the characteristic layout of houses of Roman North Africa, the persistence of old technologies when new and supposedly better ones were available, and women being possessed by spirits? Ethnoarchaeology offers a solution: observing how people today interact with their material culture, with a view to inspiring new ways of thinking about how their ancient counterparts did so. Present-day Tunisians offer an intriguing opportunity for such an approach, since they still craft and use items that have been part of their heritage for over two millennia. These traditional practices are most evident among modest villagers and especially women, individuals who tend to be under-recognized today, much as their Roman equivalents were. The resultant investigation nuances considerations of economic modes of production and exchange, gendered roles, the functionality of homes, and religious rituals. To explore these aspects, we will focus on two kinds of artifact that have maintained a place of both literal and associative centrality: hand-made ceramic ovens and braziers. 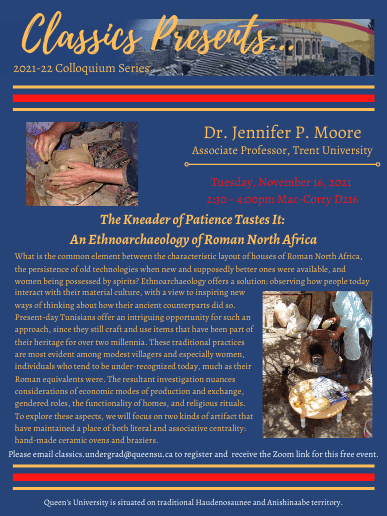 Dress and Adornment at the Roman Imperial Court

Clothing at the Roman Imperial court was a means of display for individuals and was also part of the politics of display under different regimes; it was the material creator of  social position and an important tool of social regulation. In this paper I begin by examining the dress of the courtiers (that is, companions of the imperial family), then move on to the dress of the emperors and empresses themselves. Authors from 30 BCE - 330 CE utilize dress remarkably consistently as a rhetorical tool: as shorthand for an emperor’s  or empress’ good or bad personal qualities, and to shed light on an emperor’s (or imperial family’s) character and rule. The next section, on the splendour of court dress, examines the luxury of clothing items in the imperial treasuries (thesauri), as well as the job titles of those slaves in the aula involved in appearance. The final section, on the impact of court dress, concludes that the imperial court did have some influence on fashions in hairstyle and dress outside court circles, even if the direction and configuration of this influence is shifty and impressionistic.

"Multifunctionality and the aesthetics of Roman cooking pots."

My work takes as its starting point the idea that ancient Romans had complex relationships with their everyday objects -- just as modern humans do. Objects were made, purchased, used, repaired, re-used, and discarded for many different competing reasons. When archaeologists use a number of different techniques together, it is possible to understand something about ancient objects' complex use-lives.

This project uses the study of vessel form, use wear analysis, and ceramic petrology to consider the reasons why a particularly popular type of cooking pot, internal red-slip ware (often called "Pompeiian redware") was reproduced for such a long period of time (the 3rd century BCE until the 2nd century CE) and so widespread throughout the Mediterranean. Approaching this vessel type from a number of different angles and studying it in the context of the other types of pottery which were popular at the time allows us to fruitfully consider the possibilities for multifunctionality in object use, bringing us closer to the ancient consumers' experience in the kitchen and at table. 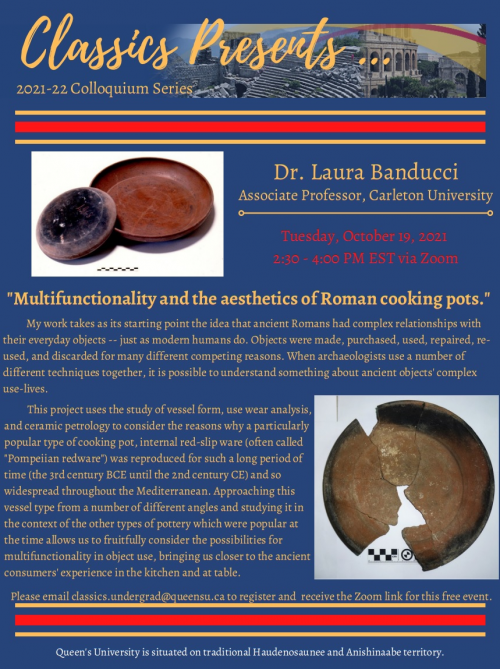 Dr. Lea Stirling, Professor in the Department of Classics, University of Manitoba

In 98 CE the Roman senate passed a decree to erase the inscriptions and obliterate the memory (including images) of the deposed emperor Domitian. Certain other deposed emperors or public figures received similar treatment in a process known as damnatio memoriae, the condemning of memory. The unwanted statues might be destroyed, repurposed for the next emperor, or warehoused. Christian chronicles record attacks on “idols,” with the destruction of the Serapeum at Alexandria and its marvel-working statue in 392 CE being a famous example. Sometimes the damaged statues were left in place; other times the remains were obliterated or removed from the site. Recent years have seen defacement, overthrow, or removal of statues of figures who upheld systems of colonization or slavery, including the toppling of a statue of Queen Victoria at the Manitoba legislature on Canada Day, 2021.

Even though the practicalities and language of desecration and the resulting shock seem similar in these episodes, a closer look at agency, the role of authorities and other groups, the underlying social or political situations, and the short- or long-term outcomes shows differences in the three types of scenarios. 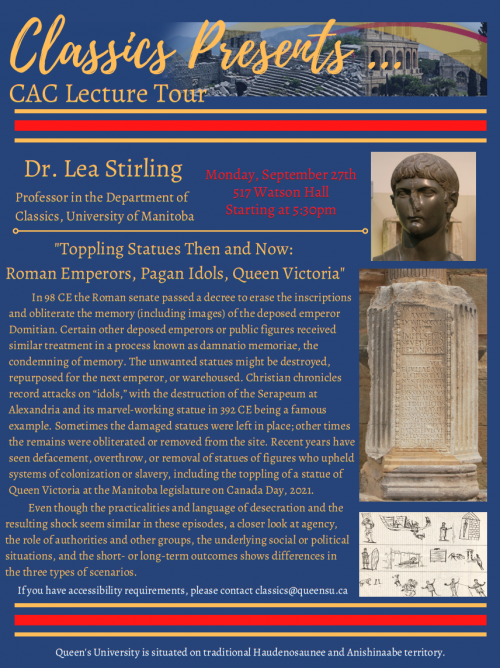