"Umbilicus Italiae: Sabines, Romans, and Lombards in the Velino Valley"

According to Strabo, the lacus Cutiliae in the Velino Valley was the geographical center of Italy, a spot sacred to the local Sabines and Samnites as part of the ver sacrum tradition among Iron Age Italic peoples. During the period of Roman expansion, the Via Salaria passed through the valley, linking the herds and flocks of the Apennines to the Roman market and providing salt from the salt pans at Ostia. During the late Republic and early Imperial period, traditional religious sanctuaries were monumentalized and at least one large podium villa was built next to lacus Cutiliae, much of this architectural embellishment has been attributed anecdotally to the Flavians, who were natives of the area and large-scale property owners. During the late antique period, the Roman settlements which occupied the valley bottom and lower slopes of the Apennines were for the most part abandoned, with only a few sites, such as the so-called Baths of Vespasian, still in use although repurposed. Since 2018, a team of Canadian and Italian archaeologists and students have been engaged in archaeological research within the Velino Valley, the focus of this research on the monumental archaeological remains at the so-called Villa of Titus, its immediate environs, and the nearby Baths of Vespasian. The focus of this research to date has been on properly identifying the extent, function, and dates of these site through archaeological excavation, geophysics, photogrammetry, and digital terrain modelling. Our goal is to use the Velino Valley between Cittaducale and Antrodoco as discrete unit of study in which we wish to reconstruct the historical settlement patterns and landuse from the Iron Age to the early Middle Ages, and in doing so examine the development and dynamics of local and regional social and economic networks. 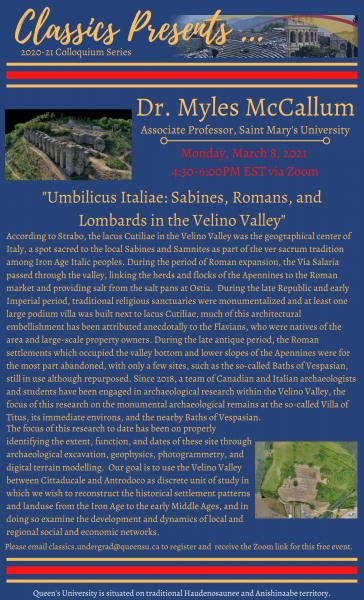 "Supplication and the Law in Attic Tragedy"

Attic tragedy is filled with religious rituals and practices. The action in the plays of Aeschylus, Sophocles and Euripides often contain prayers, sacrifices - both normal and transgressive - oracles, and hymns to gods. But one of the most important rituals in Attic tragedy is supplication. In the plays of Sophocles, there are two supplications in the Ajax, two in the Oedipus Tyrannos, two in the Philoctetes, and four in the Oedipus at Colonus. In the plays of Aeschylus, there are one or two in each play of the Oresteia trilogy and one in the Seven Against Thebes. And the action one play of Aeschylus, The Suppliant Women, is dominated by the different steps of the ritual. And there are supplications in every play of Euripides, including one named The Suppliant Women.

This talk will begin by reviewing the four steps of supplication: 1) the approach to person to be supplicated, 2) the gestures of the suppliant, 3) the request and arguments of the suppliant, and 4) the decision of the person supplicated. The rest of the talk will show how the ritual of supplication is used in Aeschylus’ Suppliants and Sophocles’ Oedipus at Colonus to structure dramatic action in time and to give a meaning to dramatic space. The talk with conclude with some comments about the rule of law at Athens and the Panhellenic nature of Attic tragedy. 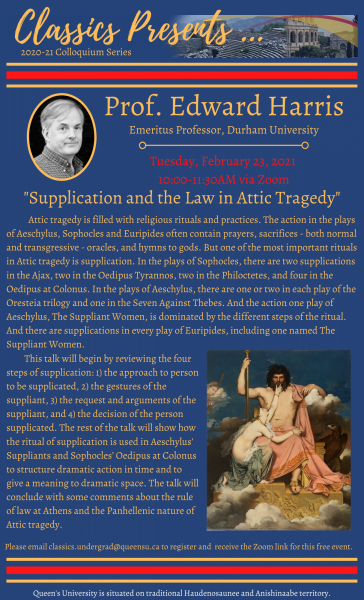 "The Soul, the Cosmos, and Eternity in Heraclitus"

This paper examines the relation between the soul (psukhē) and the cosmos in the early Greek philosopher Heraclitus. Heraclitus has been credited with discovering a new conception of the soul as a locus of emotion, perception, and self-reflection. But this “discovery” is complicated by the fact that the Heraclitean soul is also a material substance, continuous with the physical universe. My paper explores this continuity between the psukhē and the cosmos, as well as a surprising point of discontinuity: the subject’s experience of time. For Heraclitus, the cosmos is eternal but human time is finite. This temporal schism sets the psukhē forever out of tempo with the revolutions of the cosmos and opens a space within both the cosmic structure and Heraclitus’ account of it for the emergence of a new understanding of the subject. 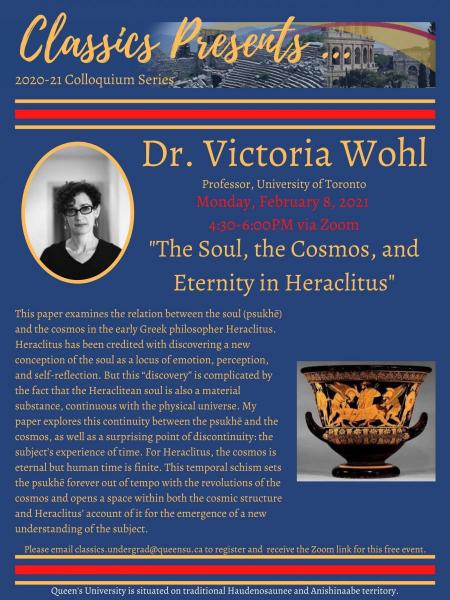 "Herakles on the Move: From Athens to Etruria"

This talk explores the ancient trade in figured pottery from Athens to Etruria, focusing on images of the apotheosis of Herakles. Popular on vases from the late sixth century BCE, these scenes have usually been interpreted from a purely Athenian perspective. The majority of vessels, however, were exported to Italy, including a fragmentary hydria recontextualized by Dr. Bundrick to a tomb at Vulci. Dr. Bundrick will share her provenance research and use the hydria as a starting point for considering Heraklean imagery within Etruscan funerary settings. 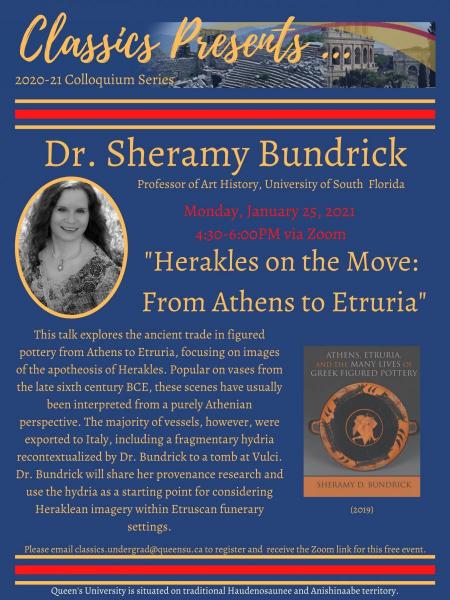 The Antikythera Mechanism: Discoveries Old & New
The Antikythera Mechanism, so named after the Greek island in whose waters it was salvaged in 1901 from a shipwreck datable to ca. 70-60 BCE, is a remarkable geared device that was constructed in the 2nd or 1st century BCE to calculate and display various astronomical, calendrical and athletic time periods. No device of comparable technological complexity is known until 1,000 years later. In 2005, a group of researchers known as the Antikythera Mechanism Research Project (AMRP) examined the 82 fragments of this badly corroded and brittle device with two modern technologies called Micro-Focus X-Ray Computed Tomography (CT) and Polynomial Texture Mapping (PTM, now more widely known as Reflectance Transformation Imaging or RTI). This talk will give a general overview of the functions and the history of the scholarship on the Mechanism, particularly recent discoveries made using these two technologies, including a new edition of the Mechanism's parapegma inscription not yet published.

*Email classics@queensu.ca to register and receive the Zoom link for this free event. 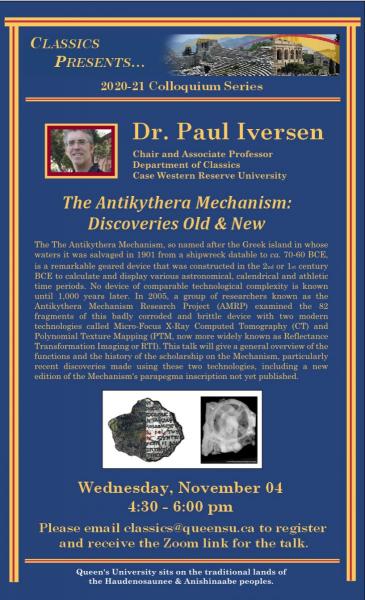