The Vorres Museum at Athens

It is with great sadness that we announce the passing of Ian Vorres, a great supporter and friend of the Department of Classics, at his home in Pyrgi, Greece, in late February 2015. He was an extraordinary man and the department had close ties with him for decades; his loss marks the end of an era.

Ian Vorres dedicated his entire life to promoting close cultural and artistic ties between Canada and Greece, a fact that has been acknowledged by many Canadian officials including The Right Honourable Lester B. Pearson and The Right Honourable Pierre E. Trudeau (for whom a brilliant reception was held in the presence of over 300 distinguished guests and covered by the Canadian press).

In October 2009 Her Excellency, The Right Honourable Michaëlle Jean, Governor General of Canada, came to Athens to receive the Olympic Flame for Canada, and on that occasion she honoured Mr. Vorres for his inclusion to the Order of Canada.

More recently, on November 5, 2013, she returned to the Vorres Museum at Athens for the opening of the exhibition, The Lure of the Local: Women Artists in the Canadian Land(scape).

The Vorres Museum was inaugurated by president Constantine Caramanlis and acclaimed actress Melina Merkouri as Minister of Culture in September 1983 and since that time, numerous international VIPs have visited it (PDF file, 83KB). In Greece the Museum is referred to as "Canada House," a fact now officially inscribed on the commemorative plaque unveiled by Michaëlle Jean during her second visit. The plaque is prominently displayed beneath the donors' plaque, at the entrance to the museum's new wing.

Between 1986 and 1988, a major exhibition of contemporary Greek art from the Vorres Museum collection was shown in many cities across Canada and the U.S. The exhibition travelled in cooperation with the Association of Canadian Museums and it is estimated that it was viewed by over 50,000 art lovers.

In addition to his impressive list of accomplishments (PDF, 88KB), in conjunction with his late younger brother,  Alexander (Alec) Vorres (PDF, 253KB) , Mr. Vorres established two scholarships:  one at Queen’s (the Alexander and Ian Vorres Hellenic Travel Fellowship and Travel Bursary for students from the Classics Department who wish to study in Greece), and one in the name of his parents, Andrew and Stephanie Vorres, at the University of Toronto. 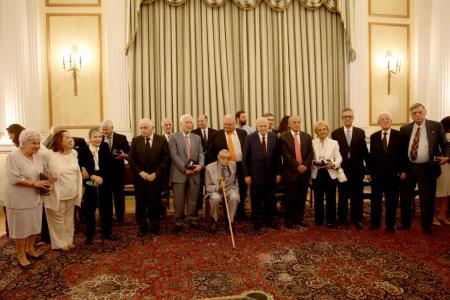