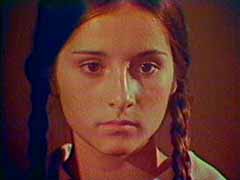 A Bird In the House

". . .the freedom of tone and carefree casualness that permeates the film brought a new tone to the Canadian cinema of this period."(Allan King, in Reid, Alison, Allan King: An Interview with Bruce Martin)

King did not simply make documentaries. Many critics state that the rearranging of the events in A Married Couple was the start of King's career in making drama. He made many dramatic films. While these films have been varied in both quality and topic, one can still see traces of King's interest and style.

In A Bird In the House King filmed a sweet story about a young Canadian girl's family during the depression. This film focuses on the almost painful amount of repressed emotion in the family. The young girl watches as her mother, father and grandmother try to deal with their problems. The film feels like it is going to explode from the tightly held emotions. Yet King does not allow for this explosion until the end. This film, while it is very different from both his traditional documentaries and Direct Cinema, still contains King's personal style. In this clip of A Bird In The House the first emotions are released as the young girl explodes in anger after the death of her father.