"For me the process of making a film is to allow everything to emerge and to find the way in which it all comes together. But simply to have a blueprint at the start, and then execute it as you go on building is not a way I can very readily work, or I don't find it very interesting to work that way." 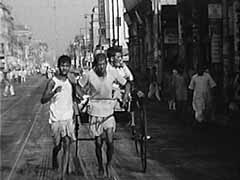 When Allan King joined CBC Vancouver, the first type of program he worked on was traditional documentaries. The majority of these films used voice-over to give the audience all of the information. Due to the clumsy and temperamental equipment being used at the time, this technique was very useful. However, it also tended to distance the viewer from the subject. Instead of becoming emotionally involved in the situation on the screen, the viewer simply watched from the outside. Yet one can still see the beginning of King's interest in the individual, and unrelenting filming of private moments.

In Bullfight, King films from a distance in many different ways. Even when he is physically close to the subject, the use of the voice-over distances and separates the audience. As well, the film is distanced in the fact that we are not given a person to identify with. We are outside the actual event and culture. In this clip King's camera is right in the middle of a crowd waiting to see a bullfight. The narrator "translates" what the crowd is saying for us. While this film is interesting and technically competent, it does not have any of the personal style of Allan King.

The film Rickshaw is another traditional documentary. While King still uses a narrator, he looks at one family and their way of life. The film centres on a man who pulls a rickshaw and his son who will soon take over the job. While we are slightly distanced by the narrator, the fact that the film uses individuals shows the beginning of King's focus on individuals. As well, King allows for some very long clips of the daily life of the two men. By doing this King builds emotion in a way that he does not in Bullfight. In this scene we see the father and son pulling the rickshaw. King does not cut the scene but instead allows the tension to build as we see how much work and pain is involved in pulling a rickshaw.

The video clips are available as QuickTime movies which require the free QuickTime to be installed.