"I was then working closer to my own temperament of letting things happen. . . Warrendale was an extremely good experience for me." -Allan King

QuickTime clip: A moment of rest at Warrendale. 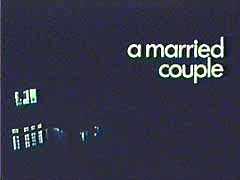 A film about a real couple whose marriage is in crisis. King and his crew followed Billy and Antoinette around for several weeks. It is another good example of Direct Cinema, although many critics citeA Married Couple as King's break from documentary and into drama.

"Some of the critics felt that A Married Couple had no imagination or that it was somehow dull. . . (it) has very much to do with finding out what marriage is about. . . -Allan King 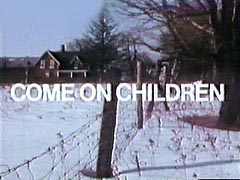 A film in which several young people are taken out of Toronto and put on a farm together. The film was an experiment to see how they fared away from adults "always telling them what to do". The camera crew followed them around as they got to know each other. The crew filmed them drinking, talking, fighting, doing drugs and even yelling at the camera. The film ends with everyone leaving the farm, to go back to the real world. While the style is Direct Cinema, the film begins with a text explanation of what is happening in the film.

QuickTime clip: The teens gather to sing and dance. 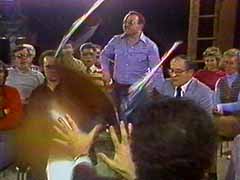 A visually unexciting documentary about a conference on being unemployed. The film is divided into the four days of the conference as the group discusses how being unemployed effects their self image and mental health. The conference is very frustrating for the participants and the viewer as they try to understand what role they will have in the conference and in life. The members of the conference question what the film will do and how King intends to use the footage. Many of the issues that they raise are the same issues raised by critics of Direct Cinema.

QuickTime clip: A guest gets fed up with the proceedings.