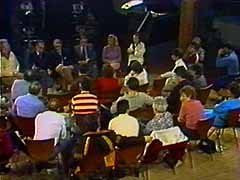 "You don't expect to change people, you hope that people will hear something or recognize something that will allow them to change or modify their behavior, to have a broader capacity for feeling, to feel for others."

(Allan King, in Veronneau, Pierre, Self Portrait: Essays on the Canadian and Quebec Cinemas)

One must acknowledge that by reducing all of King's work to three categories there are several films that seem out of place. They do not fit into any one category. Films such as Who's In Charge and Come On Children at first appear to be products of Direct Cinema. The people in the films are not actors and the events are not planned. However, the situations are much more controlled. For example, in Who's In Chargethe people are there with a specific goal in mind. In many ways, these two films are combinations of Direct Cinema and traditional documentary.

Both films begin with text. This text explains what is happening in the film and why it is being done. In many ways, this text does the same job as the narrator in King's traditional documentaries. Yet the obvious fact that the footage is shot and then a film is created from the footage, shows the influence of Direct Cinema.

These films that do not fit into categories show that the borders between the categories are not as solid as one may think. Films such as these show how both types of film-making have combined to create a contemporary style of documentary film. 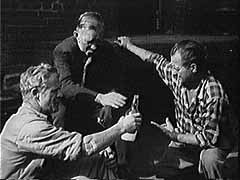 Today Allan King still works in several different styles of film-making depending upon the topic and the audience. Many of the films combine styles and methods. However, all of his films have strived to make the audience uncomfortable by shooting extremely private and emotional moments. This style of film-making is not a tool to punish the audience. Instead it is a style that aims to teach the audience and perhaps help them to grow. It is also one which lends itself to television; the personal nature of the films is easier and more acceptable to watch in the personal space of the home. Perhaps this is why the few films that Allan King shot for theatre release did not do very well. They were too invasive and personal for the viewing space of a theatre.