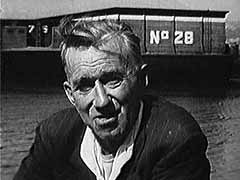 "Time and time again, one finds oneself looking away from the screen because what is coming from it is obviously too real."

While he has made some films for theatrical release, Allan King focuses on making films for television. He has made everything from short documentary pieces, to longer documentaries, to dramatic television shows. Due to the fact that he began in television, he quickly developed a style of film-making that is very appropriate for television. It is intimate and tightly focused.

One of the most common characteristics of King's style of film-making is his close examination the personal lives and emotions of small groups of people. No matter what type of film King is making he uses his camera to closely examine the subjects. In situations where other film-makers would end a scene or stop filming because the action is too personal, or the audience may feel uncomfortable, King does not turn away from the scene. In fact he isolates and focusses on these scenes. By doing this King can make the audience watch and identify with situations and emotions that normally they would not see.

In the films in which King tries to break out of this style, he is usually not successful. This is because this style does not adapt well to theatre. Thus, the majority of Allan King's well known work has been made for television. Even Warrendale and A Married Couple, which were shown in theatres, were actually created for television.