"...it is a film that while compressing, rearranging and juxtaposing the bits and pieces of reality, adheres to the truth of the story."

"It is the biggest hoax of the century."
"The sooner it is buried and forgotten, the better."

(Veronneau, Pierre, Self Portrait: Essays on the Canadian and Quebec Cinemas)

What Is Direct Cinema?

This is a style of film-making that is often confusing and difficult to define. While it has some similarities to Cinema Verité and Free Cinema, it is unique to North America. It is different from traditional documentaries for many different reason. Most noticeably the

"events seem recorded exactly as they happen without rehearsal and with minimal editing."

Unlike the traditional documentary's use of a voiceover and interviewer, in direct cinema

"people are allowed to speak without guidance or interruption, inadvertently revealing their own motives, attitudes and psychology."

How Did Direct Cinema Get Here?

Direct Cinema developed in the 1950s and 1960s in North America. It was the result of both sociological and practical changes to the world of film making. Equipment that was developed for television news documentary, such as better film stock that could be used in natural lighting, directional microphones, and a zoom lens, was used in order to

"get closer to a subject without interfering in the natural flow of speech or action."

The most obvious use of the Direct Cinema technique would be for documentaries, but they were also used in many fiction films. Films like A Married Couple took footage shot during the daily lives of people, and then edited it together to create a fictional piece. Thus, Direct Cinema is not pure documentary; due to the style of shooting and the use of "real" people and events it is not true fiction either. In many ways it mixes the two.

How Is Direct Cinema Different From Cinema Verité?

Often these two styles of film-making are confused. Many people think that they are the same style. The most obvious difference is that Direct Cinema insisted that the

"subjects (become) so involved with what they are doing that they forget the presence of the camera and the film-maker."

Whereas Cinema Verité felt that the camera made the subject

"aware of themselves by giving them a feeling of importance" 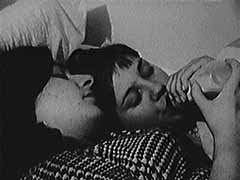 "For certain filmmakers, the 'direct' method offered them the possibility of eliminating the didactic character of traditional documentaries - the 'off-screen' commentary.... Others, however, rejected this claim to objectivity and spontaneous creation, and tried to apply the advantages of the direct to a more analytical or synthetic conception of the cinema."

What Happened to Direct Cinema?

Direct Cinema in a pure form didn't last very long. Some critics believed that Direct Cinema would replace both drama and traditional forms of documentary. Instead, parts of it were quickly adopted by the very styles of film making it was going to replace, and can be seen in films and television today.