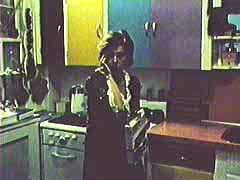 Antoinette in A Married Couple

". . .if you get a dumb insensitive, obtrusive cameraman, the interference is enormous. If you have a sensitive, intelligent, quiet, responsive . . . cameraman or camera crew, then . . .it stimulates the couple to talk, in the same way an analyst or therapist does."

By the 1960s Allan King's style of film-making easily adopted the style of Direct Cinema. By using the improved equipment and the new theories of Direct Cinema, King was able to isolate and highlight his interest in the personal life of the individual. King was able to get closer physically due to the smaller, lighter camera and recording equipment. He was also able to get closer as the lines between what should and what shouldn't be shown in terms of private life were being re-evaulated.

In the film A Married Couple King followed the unplanned daily life of a couple whose marriage was in trouble, without a narrator or a script. The result includes some very uncomfortable and personal moments, on which King focused. In this clip from A Married Couple, Billy and Antoinette argue loudly.

As can be seen in this clip, King's Direct Cinema films used the approach in which "the subjects (become) so involved with what they are doing that they forget the presence of the camera and the film-maker". Thus, Direct Cinema highlighted King's already developed style of watching and isolating personal events and emotions to show the audience.